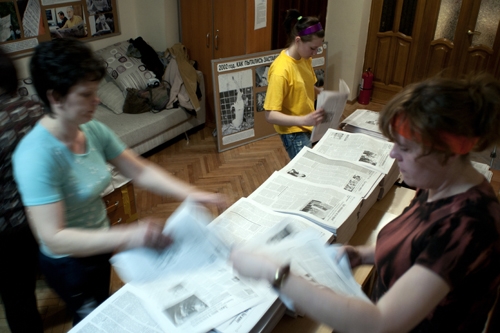 A new voice arrived on Kazakhstan's media scene in June, with high hopes and much fanfare – including a promotion video featuring a striptease from editor-in-chief Guljan Yergaliyeva.

With its slick format and hard-hitting reporting, the Guljan site – named after Yergaliyeva, a veteran reporter – sought to breathe new life into Kazakhstani journalism.

It did just that – and perhaps going too far for some because within six weeks it was brought down by a massive distributed denial of service (DDoS) attack, in effect a flood of data requests that incapacitates a web site. This particular attack, which occurred July 14, put the Guljan site out of action for an entire week.

Yergaliyeva says the onslaught bore the hallmarks of a blitz carried out by professional hackers – and she suspects revenge was the motive. “This was probably an organized attack to block our site, and it was probably done by state structures who are subjected to our criticism,” Yergaliyeva told EurasiaNet.org.

The DDoS hits that crashed the site originated from around 10,000 IP addresses, many via the Kazakhtelecom national provider, but others traced to countries as far-flung as Mexico and India. Yergaliyeva suspects disgruntled elements of the law-enforcement bodies of being behind the incident, but a glance at Guljan’s reporting reveals plenty of fodder for making enemies. It includes investigations into a police manhunt in July that ended in a bloodbath; reports on labor unrest in the energy sector that is hitting oil output targets; and articles cataloguing corruption.

Guljan was also among a handful of Kazakh outlets that covered reports this month that President Nursultan Nazarbayev had been hospitalized – in Kazakhstan his health is considered a state secret.

The cyber-attack has highlighted the smoldering problem of press freedom in Kazakhstan. Astana offers more leeway for the media than some of its more repressive Central Asian neighbors, in particular Turkmenistan and Uzbekistan. Nevertheless, the handful of critical voices that exists in Kazakhstan still faces steady pressure from authorities.

“The independent media in Kazakhstan are often subjected to methods like this – printing houses are blocked, print runs are confiscated, journalists are persecuted, or websites are blocked,” Yergaliyeva said. “This isn’t news for us. Of course we expected this, but we simply didn’t expect it to be such a powerful attack.”

Critical outlets have long played a game of cat and mouse with the Kazakh authorities – if one newspaper is closed, they open another under a new name, if one website is blocked, they move to another address.

The beleaguered Respublika newspaper is a master of these tactics. It has operated under a litany of names, and is currently forced to roll the papers off the presses by hand since no printing house will publish it.

Respublika is considering abandoning this laborious operation and moving fully online due to the high costs, deputy editor Oksana Makushina told EurasiaNet.org. “We do have such a plan, because it’s very expensive to print on a lithograph [press]. So if we don’t find a printing house, we’ll be obliged to give up the newspaper’s print version,” she said, adding that the Internet offers “much more freedom of action.”

While that idea sounds good on paper, it could easily run into practical difficulties. Many websites registered to Respublika are already blocked in Kazakhstan, as a senior US official pointed out at hearings into Internet freedom in Washington on July 15.

“In Kazakhstan, we have long expressed our concern that the Respublika news portal remains inaccessible to users of Kaz[akh]telecom, the government-owned Internet service provider, along with dozens of other independent sites that are intermittently blocked.” Deputy Assistant Secretary of State Daniel Baer told the US Helsinki Commission.

Kazakhstan’s Adil Soz, a media watchdog group, identified the Respublika websites as among the 21 sites blocked during the first six months of 2011. Under a 2009 law tightening control over the Internet, blocking on certain restricted grounds (such as promoting extremism) is legal. Astana announced in June that it would block 15 foreign sites due to extremist content. Observers contend that some blocking of politically critical sites also takes place outside the law.

Under Internet-related legislation that came into force in June, all sites using the .kz domain must use only servers within Kazakhstan. That legislation prompted Google to lash out at Astana for undermining freedom of expression and “attempting to create borders on the web” – though it later transpired that the law does not apply to Google’s Kazakh domain site (www.google.kz), since it is not retrospective.

However, the warning proved prophetic: a week after the spat with Google Nazarbayev was urging international legislation to create precisely such “borders on the web” that Google opposes.

“The time has come to introduce into international law a new concept – the electronic border and electronic sovereignty,” he told a summit of the Shanghai Cooperation Organization (SCO), a security bloc uniting Russia, China and four Central Asian states.

Astana sees web-based extremism and cyber-crime as grounds for tightening control over the Internet. Yet Kazakhstani officials insist that they do not use this concern as a pretext to stifle legitimate political dissent. Some journalists in Kazakhstan would dispute that – but Yergaliyeva, despite the trials of her new media project, remains cautiously optimistic.

“I personally… have always adhered to the principle of freedom of speech and freedom of creativity and freedom of information – everything that’s written in our constitution,” she said. “So if there was no hope, we wouldn’t work and we wouldn’t fight. There’s always hope.”