Kazakhstan jails mothers to be on the safe side

The women were accused of harboring leaflets advertising an upcoming protest. 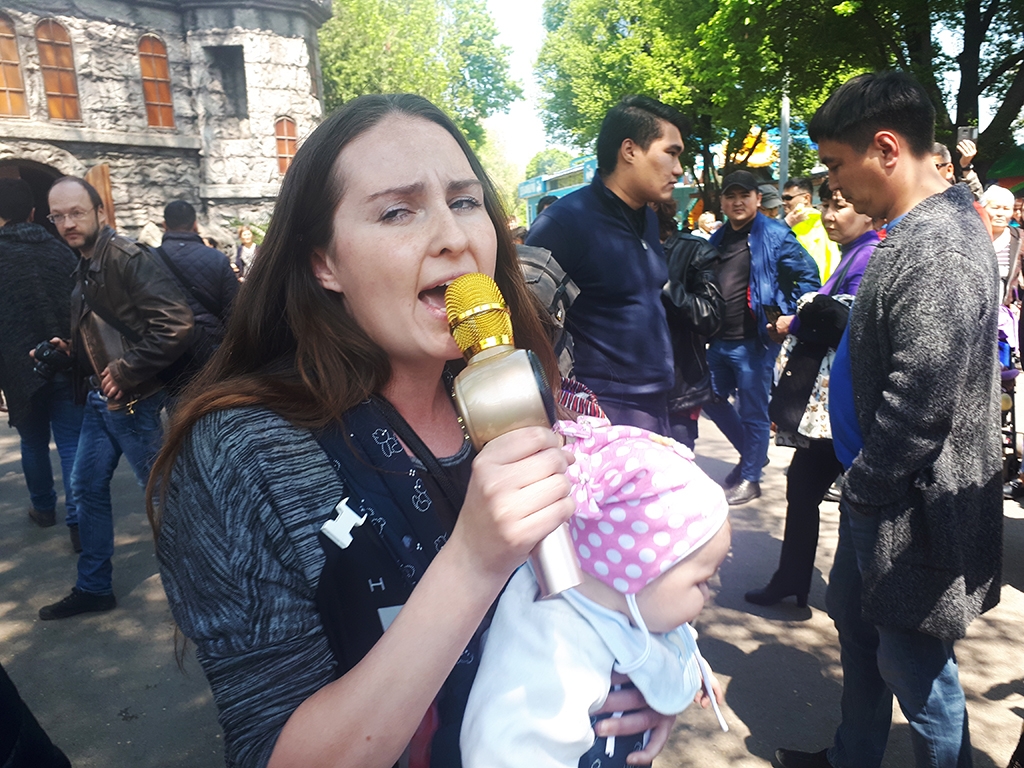 Oksana Shevchuk speaking at the May 1 rally in Almaty. (Photo: Joanna Lillis)

The court rulings ordering that the women be remanded came just days before expected July 6 protests summoned by a fugitive Europe-based opponent of Kazakhstan’s government. Prosecutors claimed alleged leaflets promoting that planned illegal demonstration were found the women’s homes – a violation of the conditions for home arrest.

Lawyers for Shevchuk and Demeuova, who had been confined to their homes by court order since the start of June, said they believe the leaflets were planted by law enforcement personnel.

A third woman, Gulzipa Djaukerova, has suffered the same fate but admitted to possessing the unauthorized leaflets. RFE/RL’s Kazakhstan service has cited Djaukerova, who has a disabled child, as saying she does not deem possession of the leaflets as an offense.

Shevchuk and Demeuova came in for scrutiny from investigators following their involvement an unauthorized anti-government rally that took place in Almaty on May 1.

That protest, like many others of its kind over recent years, had been appointed by Mukhtar Ablyazov, a virulent foe of the government and the founder of a movement called the Democratic Choice of Kazakhstan, or DVK in its Russian-language initials. A court in the capital, Nur-Sultan (formerly Astana), last year ruled to designate DVK an extremist organization, leaving anybody perceived as associating with the group open to severe criminal sanctions.

The extremism charges reserved for Shevchuk, Demeuova and Djaukerova carry a sentence of up to two years in prison.

Part of the evidence against Shevchuk is reportedly that she was caught by police, some weeks after the May demonstration, attaching a leaflet questioning an upcoming June 9 presidential election to a bus stop. Her lawyer, Galym Nurpeisov, says the leaflet had no DVK insignia on it.

The prominent role played by Shevchuk and Demeuova in the May 1 rally, which unfolded in Almaty’s leafy Gorky Park, seems to have touched a raw nerve for the authorities. As vulnerable single mothers, the pair neatly embody the concerns of increasingly vocal parents frustrated by what they perceive as the state’s failure to provide adequate support to economically struggling families. This whole theme acquired acute salience in February, when five small children died in a house fire in Nur-Sultan.

Both women turned up at the Almaty demonstration with children in tow. Shevchuk delivered some remarks while clutching a baby. Alongside her stood Demeuova, holding the hand of a young child. Both mixed their personal perspective about the difficulties of life as low-income mothers with calls for free elections and a more open political system.

The reluctance of police to snatch the pair and drag them away to waiting vans, which is the protocol during such occurrences, emboldened other members of the public to join the rally. At its peak, the demonstration was hundreds strong and noisy.

Once the demonstration started moving out of the park, however, police reverted to type and detained scores of people. Demeuova and Shevchuk, who have expressed sympathy for Ablyazov’s proposals to expand welfare but deny any links to his DVK movement, were arrested several days later.

Despite the best efforts of the authorities to discourage anti-government demonstrations, the genie is out of the bottle.

Large crowds turned to protest on June 9, the day that Kassym-Jomart Tokayev was elected president with over 70 percent of the ballot. Many continue to grumble that Tokayev is just a handpicked seat-warmer who will perpetuate the policies of his predecessor, Nursultan Nazarbayev, who stepped down in March after three decades in power.

As a sop intended to signal flexibility, officials agreed in a rare concession to permit rallies in Almaty and Nur-Sultan on June 30. Around 300 people attended that Almaty gathering.