Gulnara Zhuaspayeva says she is being punished for her work taking on politically sensitive cases. 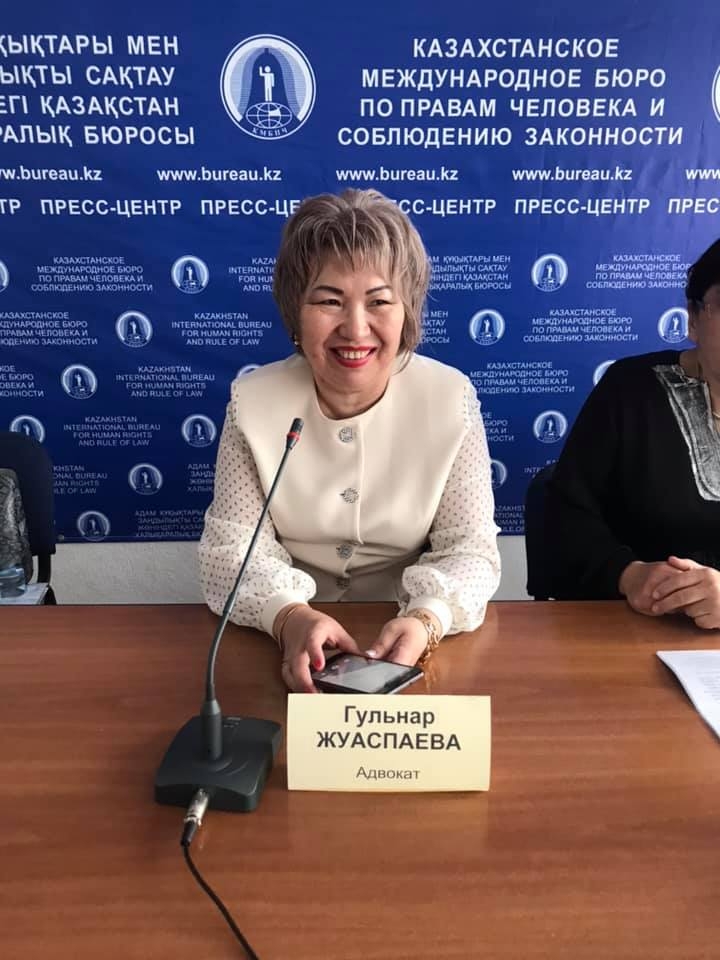 A lawyer in Kazakhstan known for taking on politically sensitive cases is fighting off a judicial complaint that could lead to her disbarment.

Gulnara Zhuaspayeva told a press conference in Almaty on April 1 that she believes this is an attempt to intimidate her into desisting from her work.

The complaint was filed by Judge Kuanysh Aripov following Zhuaspayeva’s defense of a man on extremism charges in a trial that concluded with guilty verdicts and jail terms for three suspects in December. Activists argued at the time that this was one of several flagrantly politicized criminal trials taking place at the time.

In his accusations, Aripov, who struggled to keep order during an often-unruly trial, accused Zhuaspayeva of breaking the law and breaching her profession’s code of ethics.

He charged her with being responsible for the disruption of the trial when two defendants slashed their arms with sharp objects in protest at the proceedings. Zhuaspayeva had failed in her duty to calm the accused and ensure proceedings ran smoothly, leading to the adjournment of the trial, Aripov wrote.

Aripov also accused Zhuaspayeva of filming the incident and urging members of the public gallery to do the same although photography was banned in the courtroom.

In response, Zhuaspayeva pointed out that it was not her client who had self-harmed, but the two other defendants. She says she was using her cell phone not to film but to call for an ambulance.

Zhuaspayeva rejected another allegation that she had failed to show up in court without notice several times, which the judge said bore “witness to her indifferent attitude to her official duties, which could be reflected in future in her defense of other people.”

Zhuaspayeva, who provided her services free of charge, said she believed the real reason for the accusations was that “I often take on criminal cases against political prisoners or cases that are done to [political] order.”

The extremism trial last year was the latest in a series of politically charged cases taken on by Zhuaspayeva, who made her name defending oil workers accused of fomenting fatal unrest in the town of Zhanaozen in 2011. After Zhanaozen, she acted as legal representative for a woman who accused a minister of sexual harassment in 2016. The minister denied the allegations.

The legal community has leapt to Zhuaspayeva’s defense over the complaint, which Aripov filed in December.

On April 1, the Commission for the Protection of Lawyers issued a statement drawing the attention of judicial and law-enforcement bodies to what they say is the mounting frequency of unfounded cases of disciplinary action against lawyers. The commission pointed to denial of access to case materials and suspects in detention centers as areas of special concern.

Lawyers must be able to work without “punishment or threat of it,” the commission said.

The Kazakhstan International Bureau for Human Rights and Rule of Law, an Almaty-based watchdog, weighed in, interpreting the complaint against Zhuaspayeva as a sign that “judges and prosecutors in politicized trials look upon [lawyers] not just as their opponents in proceedings but as enemies of the state.”

In a separate case, Almaty-based lawyer Dzhokhar Utebekov is fighting proceedings to disbar him after he wrote a post on his Facebook page suggesting that the renaming of Kazakhstan’s capital “Nur-Sultan” after Nursultan Nazarbayev resigned as president in March was in breach of the constitution.