The taxman is annoyed by how much revenue is lost on online payments. 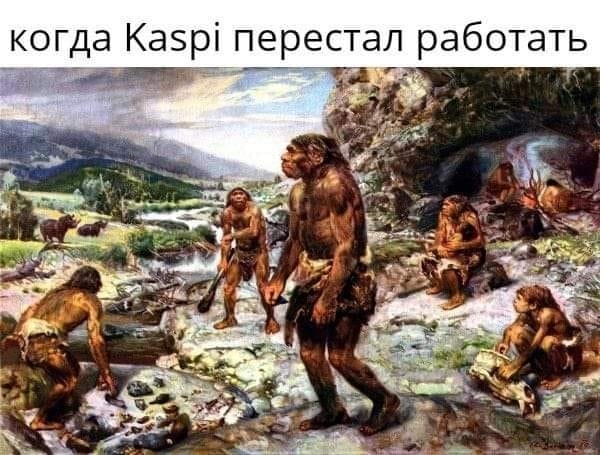 A technical failure suffered by a popular payment service in Kazakhstan momentarily caused headaches for retailers and consumers alike, while showing at the same time how much the population has come to embrace non-cash transactions.

Users of the Kaspi mobile application noticed the trouble on the morning of October 28, when they were unable to withdraw money, make payments or top up their accounts.

It would have gone mostly unnoticed if this had been a glitch at a regular bank – those happen all the time in Kazakhstan. But this is a service that around one-third of the population uses regularly.

As has become customary, flustered Kaspi users took to social media to vent. Some posted pictures showing ATM screens showing unimaginably large tenge figures, running into the trillions. (One million Kazakh tenge currently buy around $2,300). Others complained they were unable to pay for taxi rides or for their groceries. On a lighter note, one meme showing a group of hapless cavepeople without Kaspi did the rounds to illustrate just how much Kazakhs have come to rely on their beloved cash apps and cards.

And then the rumors spread. One was that Kaspi had come under attack from hackers who, it was said, had stolen about 79 million tenge ($180,000). By lunchtime, things had returned to normality.

The company quickly reassured its clients, scotching rumors of hacker activity and insisting that their money was safe.

Once a traditional bank, Kaspi, which operates under the better-known online-flavored brand of Kaspi.kz, is now positioning itself as less stuffy and more nimble. Its mobile app has proven a particular hit, with more than 7 million people – around 40 percent of Kazakhstan’s 18 million-strong population – using it.

Around 4.5 million customers have Kaspi Gold cards, which are used as something of a virtual wallet and can be used to make payments or transfer funds. Cash transfers can be made through either terminals or by mobile phone.

This option is notionally intended with relatives and friends passing money to another in mind, but it is all but impossible for the taxman to tell the difference. Aggravated by this loss of income, the Finance Ministry made noises late last year about wanting to introduce mechanisms to increase their control over online transactions. But President Kassym-Jomart Tokayev was swift to take this idea off the agenda following a public outcry.

The authorities may yet have another go at pumping the payment system for revenue, however. In February, a deputy in the city legislature in Nur-Sultan, Ilya Meshcheryakov, proposed requiring local entrepreneurs using Kaspi Gold cards to pay 3 percent of their income in taxes.

Tax officials have said they are in talks with Kaspi to explore options.

“We are seeing big losses in tax returns, because it's no secret to anyone that everyone is using these cards,” Kulmukhanbet Isakov, the head of the Nur-Sultan revenues department, was quoted as saying by Sputnik news website.

Kaspi’s business model is certainly returning lucrative results. The banking group’s initial public offering on the London Stock Exchange earlier this month gave it an implied market value of $6.5 billion, according to calculations by Reuters news agency. An unnamed source involved with the IPO told Reuters that Kaspi had benefited particularly from the COVID-19 pandemic as clients increasingly turn to online retailing.

Until that float, almost 40 percent of the company’s shares were held by billionaire and board chairman Vyacheslav Kim. Another 28.8 percent belonged to Baring Vostok Funds and a 29 percent chunk was owned by bank chief executive Mikheil Lomtadze.