This latest addition to the rich constellation of animated superheroes marks a fresh attempt by Kazakh artists to offer heroic antics with a local twist. 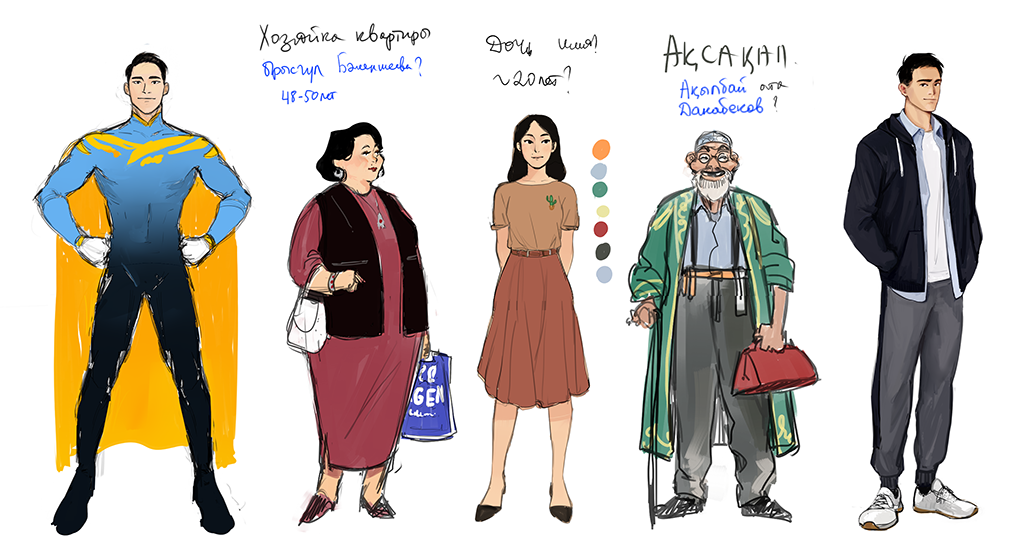 He is faster than a speeding bullet and can leap tall buildings in a single bound, but there is no certainty he will do any of it on time: KazakhMan!

This latest addition to the rich constellation of animated superheroes marks a fresh attempt by comic book artists in Kazakhstan to offer heroic antics with a local twist.

For KazakhMan to be a recognizably Kazakh superman, his creator, Beksultan Kazybek, explained to Eurasianet, he had to have a fighting spirit and a burning thirst for justice, but he could not be perfect. KazakhMan has a lazy streak and struggles to make appointments on time.

In spite of this naked appeal to patriotic sensibilities, the team behind KazakhMan recognized the need to pull out all the stops in marketing the comic. A dedicated stand for KazakhMan comics at one Almaty branch of Meloman, a popular chain of bookstores, makes the sales pitch in a particularly direct manner.

“Hi! Can’t you see me?” asks a voice coming out of a speaker built into the stand. “My name is Batyr, but my friends call me KazakhMan.”

His full name is actually Batyr (Kazakh for “hero”) Bolatuly. By day, he is something of a loser, a jobbing courier who can barely make rent. His alter ego, however, can fly or wield enormous physical strength, just like Superman, through his superpower of senim, or belief. If KazakhMan believes he can fly, it happens.

The first issue of the comic, which came out in August, shows KazakhMan’s origin story and his first – abortive – attempts to assist the public. When a large bazaar catches fire, he manages only to confound rescue efforts by another superhero and gives succor to people who no longer need it. He comes through in the end, though, by saving his home city from a falling satellite.

Some of the details in the tale are familiar fare, especially to residents of Almaty.

Barakholka, the city’s sprawling archipelago of wholesale bazaars, is struck by fires so often – either because of a disregard of safety standard or, more ominously, arson – that the phenomenon has even become the topic of a scholarly paper. The scenes of market traders barging their trollies into shoppers and old ladies sitting in rows on benches outside apartment blocks are another pair of nice touches of real-life detail.

Bult publishing house, the company behind KazakhMan, printed 15,000 copies of the first issue. That is an ambitious amount for a format that has yet to break out of niche status in Kazakhstan.

Chingiz Ondasynov, head of editorial content at Bult, is confident there is demand. As he notes, KazakhMan draws his power from faith, after all, even in the face of the skepticism of people around him. That is a core message of the comic.

“Young people should recognize themselves in, and identify with, Batyr,” Ondasynov told Eurasianet. “In this sense, he is more realistic than many famous superheroes.”

Ondasynov says KazakhMan is a symbol of a new generation of Kazakh citizens compelled to use their own wits and to strive, through trial and error, for what they want. Young people trying to make their own way through life in Kazakhstan often do so in the teeth of cynicism from those around them, he said.

That theme is conveyed off the bat, on the cover of the maiden issue, which carries an image of KazakhMan flying above speech bubbles of people saying things like: “What’s he supposed to be, a superhero? Couldn’t they come up with anything original?” “Look at that ridiculous outfit!” “Disgrace! What is this?”

That last phrase is a reference to a recurrent and much-criticized motif of contemporary Kazakh life captured in the word uyat, meaning shame or disgrace.

This even served as the inspiration for an earlier satirical superhero, Uyatman. This moralizing, caped and pot-bellied character, who existed briefly on social media as the invention of cartoonist Murat Dilmanov, lived to protect the modesty of women he deemed to be flouting proper dress codes.

KazakhMan flips this idea somewhat. As he battles to keep the satellite from plunging to earth, he is spurred by the awful prospect of how failure would constitute “a disgrace.”

KazakhMan’s creators already have a substantial fanbase by virtue of their Jokeasses Instagram account, which has racked up 1 million followers. Content there consists of comedic mini-sketches in the mold of the now-defunct Vine platform or, latterly, Tik-Tok. One sketch from 2017 featured KazakhMan in an early form.

Because the comics scene in Kazakhstan is still fledgling, it took the team some time to find an illustrator who would turn the hero of their micro-sketch into a fully fleshed-out comic book.

Zira Naurzbayeva, the author of a book about Kazakh culture, offered a mixed verdict on the result. On the one hand, she told Eurasianet, KazakhMan’s prospects are good as young people have lost the habit of reading and will be drawn by the colorful illustrations. But she echoed the critics depicted mockingly on the cover in saying that KazakhMan was a little too similar to his Western antecedents.

“Copies of American heroes are not very interesting. We need something of our own, something truly Kazakh,” Naurzbayeva said.

Ondasynov is coy about the sales figures for the comic, which is being produced in Kazakh- and Russian-language versions, but he says that he has received glowing feedback from readers.

Dinara Usenova, a 12-year-old resident of Almaty, told Eurasianet that although she is not into comics in general, she enjoyed KazakhMan.

“The cool thing is that the events take place in our city. I noticed familiar places in the illustrations. A comic like this is fun to read,” Usenova said.