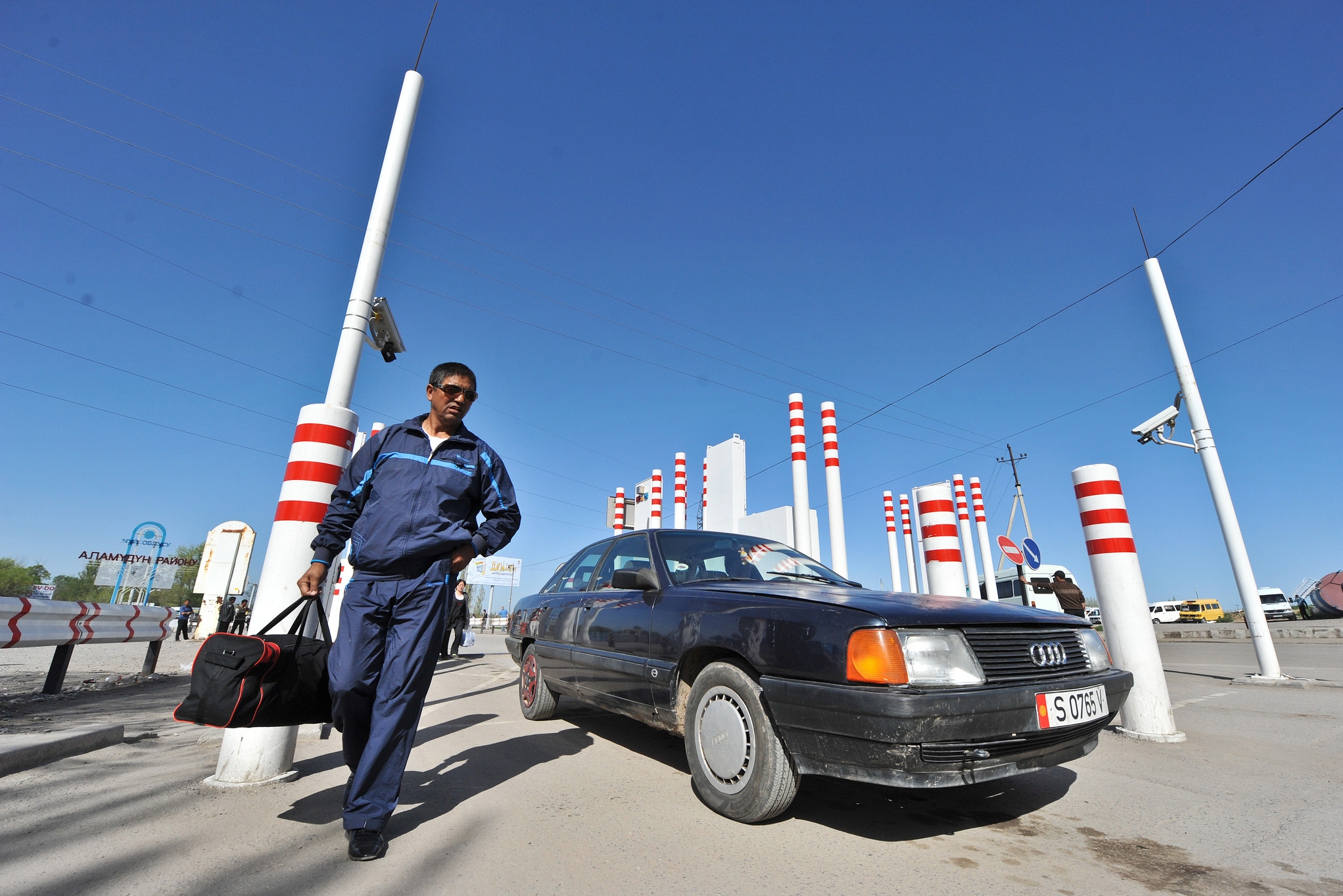 People and vehicles cross the Kazakh-Kyrgyz border at the Korday-Ak-Zhol checkpoint. Kazakhstan makes freight trucks arriving from Kyrgyzstan declare their goods, and has limited the amount of wares individuals can carry across the border. (Photo: ADB/Vyacheslav Oseledko, CC BY-NC-ND 2.0)

When Sarsenbay Koishybayev, a retiree in Almaty, Kazakhstan, went to his local supermarket recently, he did not find his favorite sour cream on the shelves. The brand comes from Kyrgyzstan and is one of the cheapest available.

“The shop assistants said that they recently stopped delivering dairy products from Kyrgyzstan, now they’re selling off the last remaining cheese. Nobody knows if the deliveries will resume,” Koishybayev told EurasiaNet.org.

The scene is the same at shops across Kazakhstan these days. Milk, kefir, cottage cheese and other dairy products from Kyrgyzstan are proving hard to find. The source of the shortages is widely believed to be a diplomatic row over what Kazakhstan is claiming is a multibillion-dollar smuggling racket abetted by its poorer neighbor.

The feud erupted over politics. Kyrgyzstan’s outgoing President Almazbek Atambayev, who will formally end his term later in November, lashed out at his Kazakh counterpart ahead of the October 15 presidential vote, claiming that Astana was trying to meddle in the process of electing his successor. Kazakhstan responded to Atambayev’s insults by tightening up checks on the border, instantly creating kilometer-long lines of cars and trucks on either side.

Frenzied bouts of diplomacy have slightly improved the situation at the border, but the state of health of bilateral relations is still getting worse. Kazakhstan’s stated reason for punishing Kyrgyzstan is alleged smuggling.

On October 25, Kazakhstan’s Prime Minister Bakytzhan Sagintayev accused Kyrgyzstan of acting as a major conduit of Chinese-sourced contraband, leading to massive financial losses to the Eurasian Economic Union, a Moscow-led trade bloc. Failure to properly enforce import tariffs, which are apportioned among bloc members at pre-agreed rates, have cost the EEU around $2.7 billion in the first eight months of 2017 alone, Sagintayev asserted.

Since Kyrgyzstan acceded to the EEU in August 2015, the pathways of traded goods have indeed undergone a dramatic transformation. Chinese exporters have since that time redirected vast amounts of their goods – mainly shoes and clothes – away from Kazakhstan toward Kyrgyzstan. Where Kyrgyzstan imported 780 tons of Chinese goods in the first half of 2015, that figure had increased to 40,500 tons in the same period in 2016, according to reporting by Forbes Kazakhstan magazine.

The Carnegie Moscow Center speculated in a 2016 analysis on the EEU that the reason for the dramatic spike lay in corruption among officials in Kyrgyzstan, who, according to the think-tank report, allow goods to pour in as contraband.

Once the Chinese goods are in Kyrgyzstan, they theoretically no longer need to pass through a series of customs and border checks before ending up in stores anywhere from Brest to Vladivostok. In reality, Kazakhstan has, despite the EEU, continued to make freight trucks arriving from Kyrgyzstan declare their goods, and has limited the amount of wares individuals can carry across the border. And when it has come to agreeing on a uniform Customs Code for the trade bloc, Kazakhstan has pleaded to grant member states discretion on how hard or soft their borders should be.

Viktor Vodolatsky, a Russian MP who sits on a State Duma subcommittee dealing with post-Soviet integration issues, said the adoption of the EEU Customs Code, which has so far only been ratified by Russia and Kazakhstan, should put an end to these squabbles.

“If one country begins to, let’s say, mess around, then repressive responses will be adopted to considerably mitigate these negative developments on our borders. And this does not just concern Kyrgyzstan and Kazakhstan, for we have all seen what has happened between Russia and Belarus,” said Vodolatsky, citing an analogous recent trade row.

Such optimism appears to underplay the nakedly political aspect of Kyrgyz-Kazakh disputes, where the smaller nation chafes at perceived interference from its richer, larger neighbor.

Media in Kazakhstan, which typically are intensely loyal to the government, have stepped up reporting on alleged instances of smuggling from Kyrgyzstan, sometimes dredging up weeks-old news for the purpose. Security services in Kazakhstan’s Jambyl region purportedly uncovered a fuel smuggling racket back in September, but they only revealed the information in the past few days.

In a provocatively titled analysis on November 2, online news portal 365info.kz described Kyrgyzstan as the “Trojan horse” of the EEU. As the article noted, there is a yawning discrepancy between what Chinese authorities say is going into Kyrgyzstan and the figures provided by Bishkek for the same. Beijing puts the value of exports to Kyrgyzstan in 2016 at $5.6 billion, and Kyrgyzstan’s figure is $1.5 billion.

Kyrgyzstan objects to such accusations by noting that similar discrepancies are registered among all EEU members.

“If we look at the statistics for 2015, China registered a volume of exports to Kazakhstan at the level of $8.5 billion, while at the same time Kazakhstan declared the imports were around $5 billion,” Kyrgyz Economy Minister Artyom Novikov told RFE/RL’s Kyrgyz service.

Analysts in Kazakhstan freely admit their government is hardly above suspicion on this matter.

“The contraband has never been stopped, as we can see from some high-profile criminal cases against people in charge of checkpoints along the Kazakh-Chinese border over the past few years. But even after all these trials, nothing has been resolved,” RFE/RL analyst Merhat Sharipzhan said in a video editorial.

Political analyst Sultanbek Sultangaliyev noted in remarks to EurasiaNet.org that smuggling has been a problem for all post-Soviet countries where corruption flourishes. Having China as a neighbor only exacerbates the matter, he said.

“Partner nations never raise this issue. And any [verbal] agreement was brought to end when Atambayev directed his harsh remarks toward Kazakhstan’s leadership,” Sultangaliyev said.

As Almaty-based analyst Talgat Ismagambetov said, despite Astana’s insistence that this row is purely about business, it is the wider situation that has served as a pretext for Kazakhstan to tighten its border.

“Intensifying control and screening for Made in Kyrgyzstan goods is not solving the problem. This is just a matter of settling scores, and our guys have really overdone themselves,” Ismagambetov said.

While officials bicker, however, regular citizens are forced to foot the bill.

“The authorities are trying to convince [us] that the decision to increase border controls was the right one,” said Koishybayev, the Almaty retiree. “But I’m afraid that shortage of cheap dairy goods from Kyrgyzstan is going to reduce competition and increase prices, and people are already having enough trouble making ends meet.”