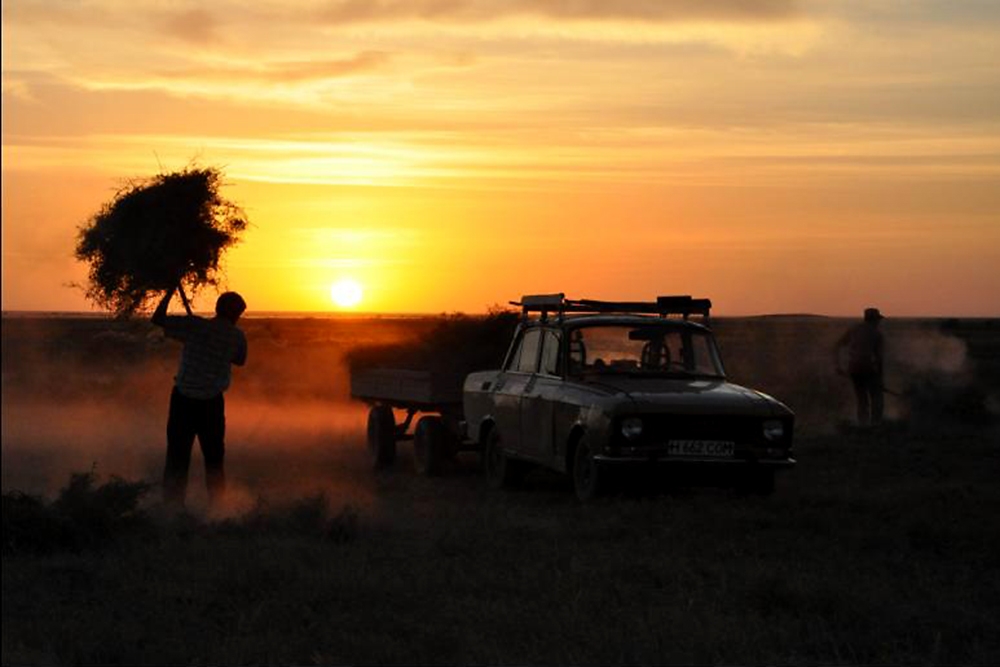 Men gather to store grass as winter forage for livestock near the village of Sadu Shakirov in southern Kazakhstan in July 2011. The government’s plan to sell and rent large plots of farmland to foreigners has sparked demonstrations across the country. (Photo: UNDP)

Authorities are facing tough choices in Kazakhstan, as demonstrations against plans to sell and rent swathes of farming land threaten to evolve into a broader anti-government movement. Some analysts are cautioning that the situation is combustible.

The potential for discontent has been percolating since November, when legislative changes were approved to extend the maximum period for which farming land could be rented to foreigners from 10 to 25 years. Emotions only began to run high in late April, after the government started a public information campaign on plans to make new land available for Kazakh buyers and foreign renters, starting this summer.

To date, attempts to defuse tension have ranged from heavy-handed policing and media attacks on demonstrators to pleading reassurances and warnings about the possibility of violence.

The government has seemed to have been caught by surprise when it comes to gauging the public mood. “What we see now is not only a protest against land reforms, but a general protest against the actions of the authorities, who often ignore the views of the people,” Dosym Satpayev, director of the Kazakhstan Risks Assessment Group think-tank, told EurasiaNet.org. “These protests pose a very serious problem for the authorities, who have no understanding of society.”

Kazakhstan has been chopping and changing land laws since the early post-independence period, so the government may have thought the most recent changes might pass without too much public notice.

In 1995, President Nursultan Nazarbayev approved a law allowing foreigners to rent land for up to 99 years. That period was reduced to 49 years in 2001 and then again to 10 years in 2003. Nazarbayev and other officials have sought in vain to quash speculation that land would be sold to foreigners — the specter of Chinese farmers scooping up massive tracts of Kazakhstan is a particularly incendiary topic.

While a demonstration in the southern town of Kyzylorda was degenerating into a running scuffle with riot police on May 1, Nazarbayev hinted to a crowd in Almaty that continued protests could plunge Kazakhstan into the kind of bloody unrest that has plagued Ukraine in the past few years.

Some see the land issue not so much as the source of discontent, but as a reflection of broader, long-simmering frustrations. “Land is just a pretext for expressing deep unhappiness. There was unhappiness before, but it was hidden by economic growth. And now there is no economic growth,” said Nygmet Ibadildin, an associate professor at KIMEP University in Almaty.

The International Monetary Fund has forecasted that economic growth in Kazakhstan will slow to 0.1 percent this year before rising to 1 percent in 2017. While growth is stagnant, consumer prices are climbing steadily. That means an increasing number of households is struggling to deal with the fallout. Official figures suggest unemployment is low, but that masks the real scale of hardship being endured.

Ibadildin said the economic slump, brought on by the collapse in the price for Kazakhstan’s oil exports, has presented opportunities that have gone unexploited.

“Buying public loyalty is hard now, because everything that rained down on the people from the oil shower has stopped,” he said. “In history, if an oil state runs out of money, they tend to become more liberal, they open the way to entrepreneurship, things are relaxed, liberalization happens. That has not happened in Kazakhstan.”

Ibadildin said that he expects instead the authorities to rely on repressive measures as they try to navigate the economic doldrums.

There has been more than a smattering of that already in recent days. A press conference in Almaty to discuss the land issue was called off after police detained organizers. A reporter for RFE/RL was prevented by police from reaching one protest in the western town of Zhanaozen, which was the site of bloody labor unrest in 2011. Even people trying to hold one-man pickets have found themselves either detained or fined. Most worrying for the authorities, the May 1 rally in Kyzylorda degenerated into a messy confrontation between disorganized riot police and a few dozen demonstrators.

Borrowing a tactic from the Russian government media playbook, state reporters have also tried to cast demonstrators as malcontents rousing trouble in exchange for money. Aimira Shaukentayeva, an anchor for First Channel Eurasia, which is 20 percent-owned by the Russian government, claimed during her news digest show Analitika that the protests are being instigated by outside forces — an unsubtle, but characteristically nebulous reference to the West.

“We have confidential information that every person going to unsanctioned meetings … is receiving between $50 and $150,” Shaukentayeva said. “And this is being paid for from very far away. From very different countries that are not indifferent to our fate.”

Berdibek Saparbayev, the governor of Aktobe, a region in the west that has seen its own fairly large demonstration, reprised the theme in remarks cited by Diapazon website. “Why should we listen to those hiding in the West? Why should we work for Western money? Where is our national pride?” Saparbayev said.

Those involved in the demonstrations deny there is any outside organizing force behind their movement. “Hand on heart, there are no coordinators,” Maks Bokayev, an activist involved in a large protest in the western oil city of Atyrau on April 24, told Exclusive.kz.

Speaking about the protest in Aktobe on April 27, Bokayev said he was impressed by the level of self-organization. “By all appearances, there were simple people not previously engaged in activist work. This only confirms the notion that Kazakhstanis are ready for democracy,” he said.

The government’s good cop role has fallen to Senate speaker Kassym-Jomart Tokayev, who called for efforts to close loopholes that might end up with rented land falling permanently into foreign hands — the concern that moves many protesters — as a way of soothing tempers.

“Legislation and other measures need to be adopted to ensure this prerequisite is adhered to, and so that nobody gets the idea of circumventing the rules through some cunning scheme,” he was cited as telling lawmakers by state news agency Kazinform.

But for some, like political observer Viktor Kovtunovsky, the focus on specific land-use rules may be missing the main point. “The protest mood is in many ways not linked to specific land issues, but is connected rather with that fact that authorities disregard public opinions on everything,” Kovtunovsky said.

The government’s room for maneuver seems to be shrinking by the day, making it imperative to take decisions that do not inflame tempers further. “Kazakhstan is getting to the point when any spark could set off a big flame,” Satpayev said.