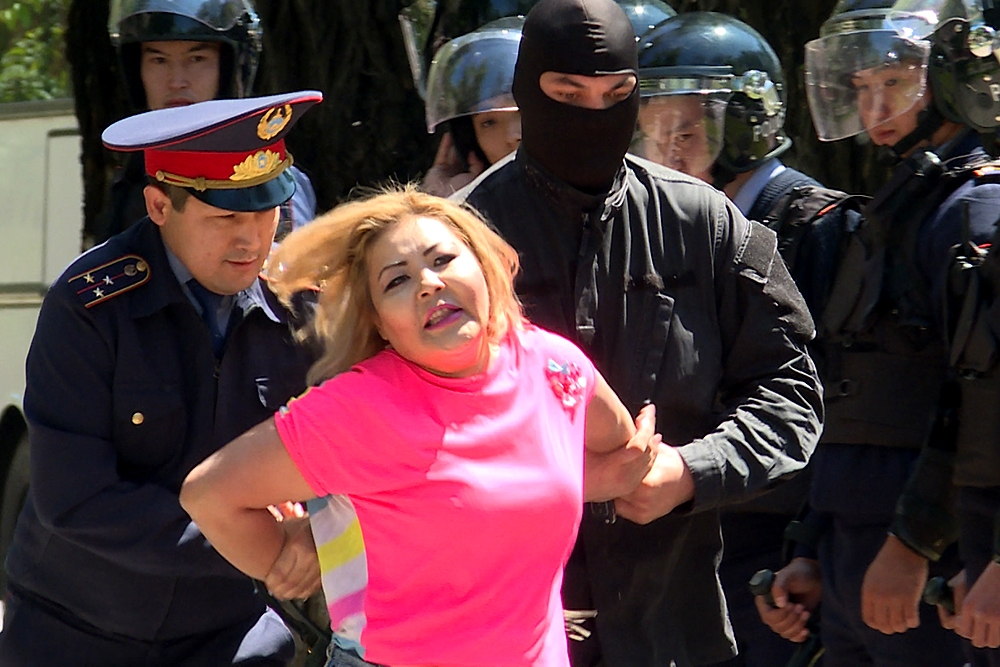 Riot police detain a woman singing the Kazakh national anthem during the nationwide May 21 protests over contentious land reforms. Most of those detained were released without charge, but some were tried and fined or jailed for up to 15 days. (Photo: RFE/RL)

Kazakhstan is taking stock after the worst social unrest in years erupted over the weekend, denting the country’s carefully cultivated image as a haven of stability.

Anti-government demonstrations are unusual in Kazakhstan, and this was the first significant bout of turmoil since late 2011, when an oil strike in the western town of Zhanaozen descended into violence that resulted in 15 protesters being shot dead by police.

Contentious land reforms are stoking the protest mood in Kazakhstan these days. Social media lit up on May 21 with images of masked riot police officers manhandling demonstrators in several cities across Kazakhstan as they attempted to voice dissatisfaction over the land reforms. On May 24, human rights campaigners in Almaty accused authorities of committing massive violations of civil liberties for arresting hundreds of people as they sought to exercise their right to peaceful protest.

“It’s the general atmosphere of a police state,” said human rights campaigner Yevgeniy Zhovtis. “Not only are we guaranteed the right to assemble, but under its international obligations, the state is obliged to assure that right.”

Zhovtis said there were “blatant violations” of the rights of hundreds arrested on spurious grounds. Many were held for hours in police stations without access to legal defense, he said.

“The country’s constitution and laws were breached,” said another campaigner, Zhemis Turmagambetova.

Most of those detained were released without charge, but some were tried and fined or jailed for up to 15 days. Ahead of the rallies, around 40 individuals were imprisoned for making plans to hold the nationwide day of protest on May 21.

Officials have not confirmed how many were arrested, but the total ran to over 500, according to Human Rights Watch, which has characterized officials’ actions on May 21 as “outrageous.” Around 300 were detained in Almaty, from where emerged the most iconic image of the protests: a woman in a pink T-shirt being frogmarched away by riot police as she sang the national anthem.

Officials justified the arrests on the grounds that the demonstrators were breaking Kazakhstan’s stringent laws on public assembly — which a UN rapporteur has urged Astana to relax. Authorities added that protest organizers lacked the proper authorization to hold mass gatherings. Not a single city government acquiesced to requests to hold rallies on May 21.

Senior police official Igor Lepekha drew widespread derision for claiming that there had been “no unsanctioned rallies” since, as he put it, they had been thwarted through effective policing.

Public protests are being fanned by dissatisfaction with reforms aimed at expanding land sales to private investors. Many believe the initiative could open a backdoor route for foreigners to gain ownership of land. Astana insists this is false and says the changes are aimed at attracting investment to the agricultural sector.

President Nursultan Nazarbayev, who has yet to comment on the unrest, sought to head off the burgeoning protest movement in early May, after spontaneous rallies broke out in various cities. He has frozen the land reforms and ordered the formation of a commission, including some respected, independent civil society figures, to discuss how to proceed. That move proved too little, too late.

According to Almaty-based political analyst Rasul Zhumaly, the land-reform issue was merely the spark for the demonstrations. Beneath the surface, there are simmering socio-economic grievances that have been exacerbated by an economic crisis brought on by low oil prices. Frustrations have been further stoked by the Nazarbayev administration’s governing style, which rarely allows for ordinary people to make their voices heard.

“These problems have been piling up for a long time, but for a long time apathy, pessimism, passivity and fear reigned … especially after the shootings in Zhanaozen,” Zhumaly told EurasiaNet.org. Now resentments are boiling over and driving people onto the streets, he suggested.

“I think the authorities have become very tense because they perceived this rally ... as moving from talk about land reform to political demands,” civil society campaigner Galym Ageleuov told EurasiaNet.org.

In a development with alarming implications for Astana, one slogan harnessed on social media to advertize the protests had nothing to do with land reform at all. Shal Ket! -- Kazakh for “Old Man Out!” -- was an obvious reference to the 75-year-old president, who has governed Kazakhstan since it gained independence in 1991, and who was last re-elected with 98 percent of the vote.

“It is often heard now that the time has come not only for economic and social reform, but also political reform,” said Zhumaly. “I’m not saying that the majority are saying this. … But these sentiments are present, that political reform is needed.”

Nazarbayev remains popular among many in Kazakhstan for what they see as his role in delivering years of petrodollar-fueled growth and social stability. Recent events have dented his authority in the eyes of some, however.

“He used to be good, but I’m not so keen now,” Serik, a 47-year old Almaty resident who sympathized with the land protesters but had not joined them, told EurasiaNet.org. “It’s time he handed over power.”

The authorities are unaccustomed to dealing with such protest sentiments and appear to be struggling to formulate a response.

“It’s very dangerous for the future of the country,” political activist Marzhan Aspandiyarova, who has been arrested three times over these protests since late April, told EurasiaNet.org. “When these mass arrests take place, it tells you that there is no one left in power who can adequately assess the situation, and control the situation.”

The protests are grassroots-led, and Kazakhstan’s almost non-existent political opposition is conspicuous in its absence from the protesters’ ranks. Officials have sought to discredit demonstrators by hinting darkly that sinister forces are purportedly directing them. Before the May 21 protests, police in Almaty announced they had found caches of firearms and Molotov cocktails that they claimed were going to be used to stage provocations during the rally. Loyal media duly relayed the allegations, which were greeted skeptically on social media.

Meanwhile, government-linked media have launched a smear campaign accusing the protesters of being fifth columnists stirred up by outside — by implication Western – forces.

No further rallies have been announced and it is not clear if the protest movement will now die down or snowball.

Zhumaly predicted that unless Astana showed a genuine willingness to address popular concerns, “the situation will continue to heat up.”

“I think there will now be a lull,” said Ageleuov, but “at the slightest impulse … it could spark up again.”