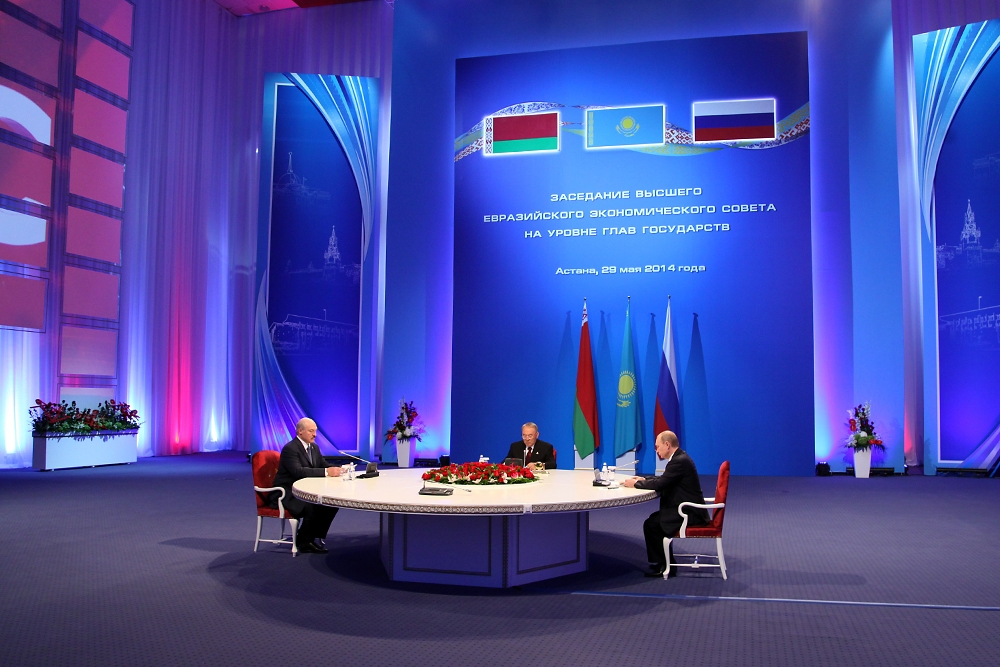 The leaders of Russia, Kazakhstan, and Belarus signed a potentially game-changing treaty in Astana on May 29, establishing a Eurasian Economic Union (EEU). If the union develops as envisioned, it could transform the geopolitical architecture of the post-Soviet region. But lots of hurdles still need to be cleared for that to happen.

The signing ceremony in the Kazakhstani capital Astana was set against a backdrop of heightened regional tension stoked by the ongoing political crisis in Ukraine. In the weeks leading up to the event, the three signatories squabbled over the shape of the union, amid ill-concealed concerns among Kazakhstani and Belarusian officials that Russia seeks to dominate the union. In Kazakhstan, authorities are also trying to stifle protests by a small but vocal minority that asserts Astana is signing away the country’s sovereignty.

Host President Nursultan Nazarbayev struck an upbeat note as he and Vladimir Putin of Russia and Alexander Lukashenko of Belarus set differences aside to create the EEU out of their existing Customs Union. The pact will go into effect on January 1, 2015.

“We see the EEU as an open economic community, organically plugged into global communications as a reliable bridge between Europe and growing Asia,” Nazarbayev said.

Putin – who paid tribute to his host for first proposing the idea of creating a Eurasian Union some two decades ago – hailed the treaty as a “milestone” that will create “a powerful and attractive economic development center, a major regional market uniting over 170 million people.”

Putin’s pledge that the EEU would be “transparent” was undermined by the fact that the treaty’s text has not been made public. This lack of disclosure has outraged many in member states and has prevented analysts from assessing the union’s potential impact.

Lukashenko was the only president to mention the elephant in the room, namely the absence of Ukraine in the EEU. In late 2013, then-Ukrainian president Viktor Yanukovych shied away from closer integration with the European Union and sought to strengthen ties with Russia. That move sparked the Euromaidan protests which culminated in his administration’s downfall. The new leadership in Kyiv is determined to steer Ukraine towards the European Union, thus depriving the EEU of an important piece.

Finalizing the EEU treaty was a “very difficult” process and “we lost some [potential members] along the way,” Lukashenko said, pointedly naming Ukraine – but “life has shown that we have chosen the right path.”

After hosting a troubled summit last month that exposed divisions among the EEU founders, Lukashenko extracted concessions from Russia over oil shipments and agreed to sign the treaty – but he has made no secret of his dissatisfaction: the day before the signing he criticized the agreement as “not the treaty Belarus was counting on, and not the one our partners originally declared, primarily the Russian Federation.” For Kazakhstan, the main stumbling block has been concerns over sovereignty, fears heightened by Moscow’s actions in Ukraine, which have helped critics of the pact frame the EEU as a backdoor bid by a resurgent Russia to recreate the Soviet Union.

Nazarbayev has rejected the notion the EEU marks the start of a revived Soviet-style political arrangement and has vowed that Kazakhstan will not cede “an iota” of sovereignty. He insisted at the signing ceremony that the treaty respects “the states’ sovereign equality.”

Putin’s avid wooing of new members for the union put Nazarbayev and Lukashenko on guard. Kazakhstani officials stressed ahead of the summit that it had successfully lobbied to exclude treaty provisions that are perceived in Astana as political, such as plans for joint citizenship and a joint foreign policy. The presidents of Armenia and Kyrgyzstan attended the Astana summit, where it was agreed that Yerevan’s accession bid would be finalized by July 1. Bishkek, meanwhile, will try to finalize its bid by the end of the year.

In the run-up to the signing, amid a spate of protests, Kazakhstani officials went on a media offensive at home to convince skeptics of the union’s potential economic benefits. The new economic bloc, with a combined GDP of some $2.7 trillion, will open up new trade opportunities for landlocked Kazakhstan, they stressed.

Many Kazakhstani businessmen welcome the launch of the EEU, but opponents remain unconvinced. “I think dark days are coming our way. We are losing our independence,” said newspaper editor Ryspek Sarsenbay in a video posted by RFE/RL, as he laid Kazakhstani flags with black ribbons attached to symbolize a loss of sovereignty at Almaty’s Independence Monument on May 29.

He was joined by protesters wearing surgical masks participating in an anti-economic union campaign organized via social media: the masks symbolized an attempt to protect wearers against the “virus” of imperialism.

“The masks … show to the rest of the world that Kazakhs do not support a new form of colonization by Russia in the form of the Eurasian Union and are absolutely unhappy with that,” organizer Serikzhan Mambetalin told EurasiaNet.org.

Police rounded up an unconfirmed number of masked protesters in Almaty on May 29, and detained “dozens” in Astana, RFE/RL reported. Two days previously, 10 people attending a meeting to plan a protest, including an RFE/RL journalist covering the event, were jailed in Astana for up to four days. Anti-economic union activists held public hearings in Almaty on May 22, urging Astana to hold a referendum before signing the treaty. Campaigner Tolegen Zhukeyev asserted that the EEU is “a political union of authoritarian regimes.”

“The threat looms of our country losing its sovereignty and independence, and on that level we are going to actively oppose [the union],” organizer Zhanbolat Mamay told EurasiaNet.org on the sidelines of the May 22 hearings. The previous day, he was subjected to a six-hour interrogation by intelligence agents in what Mamay called a “provocation” to intimidate him.