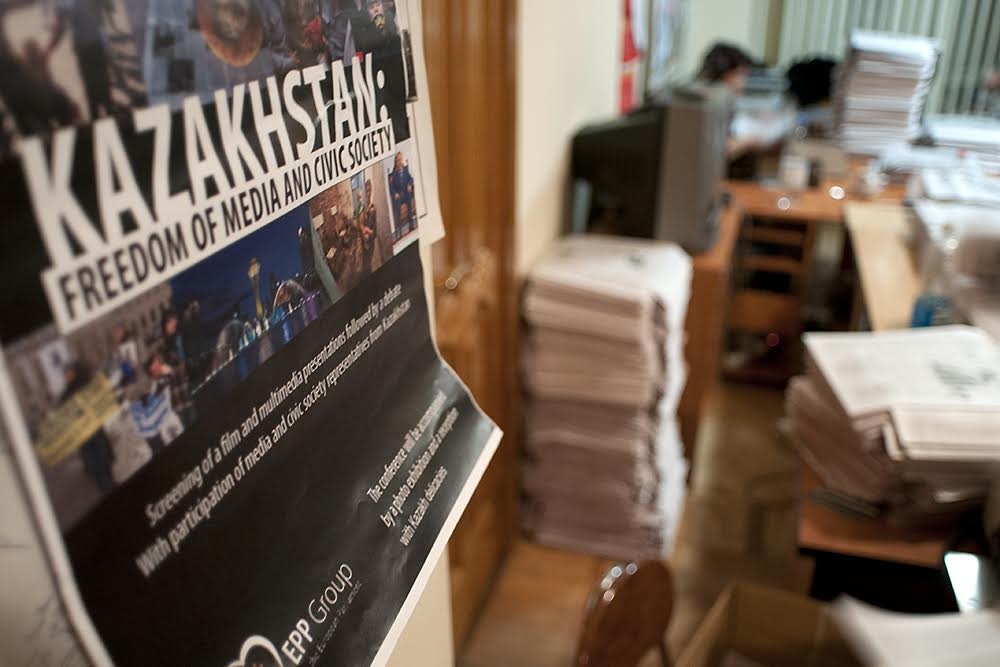 There is a bleak mood hanging over the editorial office of the Nakanune.kz website these days. The news site, which has won plaudits for its hard-hitting coverage in Kazakhstan’s beleaguered media environment, has run afoul of the country’s judicial system.

“They’re closing our mouths,” sighs Nazira Darimbet, one of the small team of journalists reporting out of a cramped office in a downtown Almaty apartment block.

She is referring to a libel case filed by a Kazakhstani bank, which alleges that Nakanune.kz’s reporting about alleged sleaze in Almaty’s construction industry damaged the bank’s reputation and caused profits to fall. The site insisted the story served the public interest, and was consistent with the spirit of President Nursultan Nazarbayev’s much-hyped war on corruption.

On June 19, an Almaty court returned its verdict: guilty as charged. The decision left “us all in shock,” Nakanune.kz’s Oksana Makushina told EurasiaNet.org. The judge ordered defendant Guzyal Baydalinova, the domain name owner, to remove the offending post and pay damages of 20 million tenge ($107,000), slightly under the 25 million Kazkommertsbank had demanded.

“They obviously think I am Rockefeller’s daughter,” Baydalinova quipped in an interview with EurasiaNet.org before the verdict.

Joking aside, the implications are serious: the ruling could personally bankrupt Baydalinova, and put Nakanune.kz out of business, if the court orders her property seized.

Journalism should be the “watchdog of society,” but “we see blind intolerance of critical material,” said Tamara Kaleyeva, president of Kazakhstan’s Adil Soz (Free Speech) watchdog, after the verdict.

The offending material aired allegations of sleaze and graft in Almaty’s construction industry, while hinting that City Hall was also involved in unsavory activity. The mayor of Almaty, Akhmetzhan Yesimov, has close ties to Nazarbayev and is sometimes mentioned as a possible presidential successor. Kazkommertsbank was mentioned in the expose as a financial institution through which the state channels funds for building programs.

The allegations – strenuously denied by Kazkommertsbank and City Hall – were contained in a scurrilous anonymous letter, the authenticity of which Nakanune.kz’s journalists admit they were unable to verify.

Kazkommertsbank took six months after the publication of the article in question to file a lawsuit, kindling suspicions among the journalists that the true instigators were officials in Astana. “I don’t think this [the suit] was the bank’s own initiative,” said Makushina bluntly.

“The thought springs to mind … that Astana’s behind it,” mused Baydalinova. “I don’t know who exactly, it’s hard to say. Evidently, whoever was bothered by Respublika is bothered by the Nakanune project.”

These journalists used to work for Respublika, a punchy newspaper that operated for years under pressure. (At one point, reporters resorted to rolling copies off the presses by hand after publishers refused to print them.)

Allegedly funded by fugitive oligarch and Nazarbayev foe Mukhtar Ablyazov, Respublika was a thorn in Astana’s side until its closure in 2012 on charges of fomenting extremism. Respublika’s demise occurred amid a sweeping, internationally-condemned media crackdown that left only a handful of independent outlets in business.

Respublika’s journalists set up another newspaper, but it was summarily closed last year, after which they launched Nakanune.kz, evocatively named after a 1920s newspaper published by writers-in-exile fleeing Soviet persecution.

The Respublika name hangs heavy over the libel case, as an associated Russia-based website, Respublika-kaz.info, which re-published the sleaze allegations, was named as co-defendant. It is run by associates of Ablyazov, who is in jail in France awaiting the outcome of a protracted extradition battle. The site is also embroiled in a case pressed by Astana in the United States over allegations that government computers were hacked and thousands of emails stolen.

Media watchers see the ongoing cases as emblematic of shrinking space for free expression in Kazakhstan. Astana, which says it steadfastly safeguards the right to free speech, rejects that charge.

“There’s definitely more control and less freedom,” Adil Nurmakov, a journalism professor at Almaty’s KIMEP University, told EurasiaNet.org. “This applies to freedom of access and to freedom of expression online.”

He points to a raft of new restrictions such as extra-judicial online blocking and legislation that tightens already restrictive press controls, including stiffer libel penalties and the criminalization of rumormongering.

“Lately, authorities have started reacting sharply not only to criticism, but simply to objective coverage of information,” Nakanune.kz journalist Tatyana Panchenko told EurasiaNet.org. “Here even being a mirror [of events] is dangerous.”

The Nakanune.kz trial is not the first press freedom case to grab headlines this year: in February, Adam Bol (Be a Person) magazine was closed down on charges of inciting conflict in its Ukraine reporting.

So is successor magazine Adam under pressure? “I don’t know if you can call surveillance pressure, for example,” Sharipbayev replied with a philosophical shrug, referring to suspicions that journalists are sometimes tailed by intelligence agents.

“Can you call delays at the printer’s pressure?” he asked. Such delays, he added, frequently occur when a controversial issue hits the presses.

The key to survival is self-censorship, admitted Sharipbayev, who acknowledged that his publication is wary of directly criticizing Nazarbayev personally. Nakanune.kz’s Makushina echoed this line: “We have to switch on the self-censorship,” she said, “to preserve a platform where we can report.”

Nakanune.kz’s journalists plan to appeal the libel verdict through Kazakhstan’s courts and “right up to the UN Human Rights Committee,” said Makushina.

“If we’re closed down, we’re ready to slam the door behind us,” she pledged, “so it makes waves.” Even then, all is not lost: “It’s another matter that we can always open another site.”