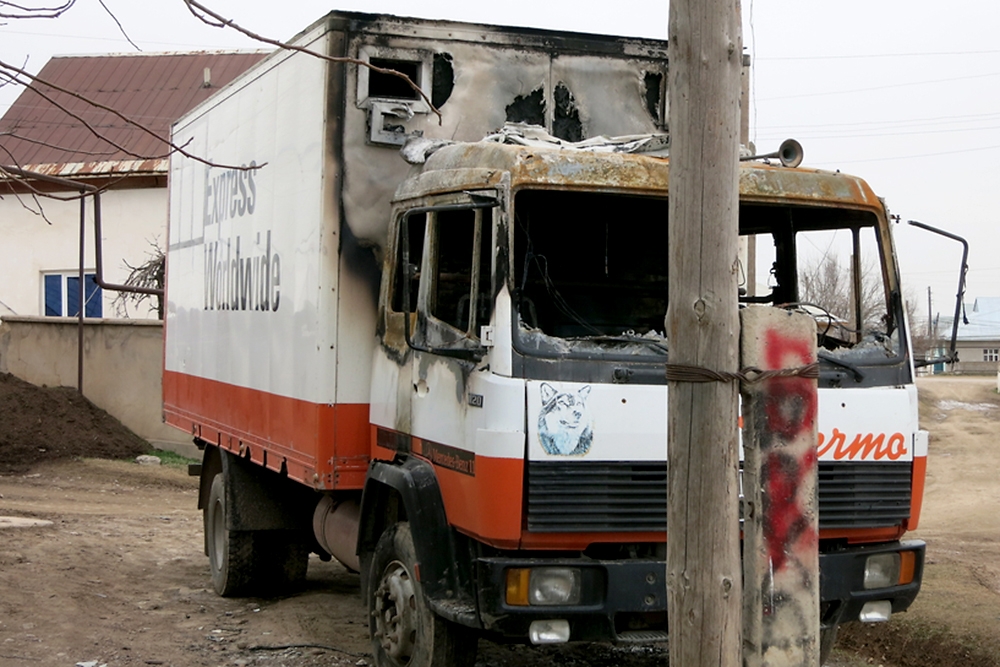 “Kazakhstan is a land of unity and accord,” reads the billboard looming over the highway to the southern village of Bostandyk, which was hit by ethnic clashes between the Kazakh and Tajik communities last week.

Four days after the unrest the area was still under lockdown by security forces, with the Internet shut off. Though the conflict was localized and tensions quickly faded, the episode shows just how suddenly ethnic violence can grow out of control. With neighboring Russia having recently rewritten the rules for intervening to protect its ethnic kin abroad, Astana is especially sensitive about ethnic frictions. Russians, after all, make up a sizable minority in Kazakhstan.

Events on the ground in South Kazakhstan Region on February 5 are little disputed. “There were two close friends, a Tajik and a Kazakh,” Tajik community elder Umurdin Nazhmiddinov explained. “They had a fight and the Tajik pulled a knife on the other, as a result of which the other died.”

Nazhmiddinov was speaking to EurasiaNet.org in a teahouse near the victim’s family home in Yntymak, where relatives were mourning while hordes of riot police and plainclothes security agents patrolled the streets.

It was from here that enraged residents, intent on revenge, set off for the adjoining village of Bostandyk – which is predominantly ethnic Tajik – after the funeral on February 5, rampaging through the streets, setting vehicles and houses alight, and hurling stones through windows.

No casualties were reported, but a dozen damaged houses and several burned-out trucks and cars on the potholed streets testify to the disorder, unusual in a country that prides itself on social stability.

The killing of Bakytzhan Artykov was sparked by a dispute over a greenhouse rental, which local authorities insist was a “domestic” incident. The situation has stabilized now that the suspect, Navmidin Narmetov, has been arrested and his family has left the village, authorities say.

But voicing a view prevailing in both communities, Bostandyk resident Suhrob (a pseudonym—like most interviewees, he declined to use his real name) says the row “was just the spark.”

Nervous of publicly discussing the taboo topic of ethnic frictions, Suhrob spoke to EurasiaNet.org in a cloak-and-dagger interview conducted in a car, because “we’re under the watchful gaze of the security forces.”

“Let the guilty man be punished, but it’s as if the fault is all of ours. I’m a Tajik so I’m guilty before all Kazakhs,” said Suhrob, whose house and car were damaged in the violence.

Like multi-ethnic Kazakhstan itself, the south, near the border with Uzbekistan, is a melting pot, with the majority Kazakhs living alongside minorities including Uzbeks, Uighurs, Tajiks, Tartars, Russians, and Koreans.

Bostandyk’s Tajik community was resettled from Soviet Uzbekistan during administrative gerrymandering in 1954, explained an octogenarian retired teacher attired in a traditional blue velvet robe and skullcap. “Since then we’ve lived in friendship,” he said. “But now we’re being called outsiders.”

“Any domestic, criminal, or economic conflict can quickly grow into an ethnic one,” Almaty-based analyst Aidos Sarym told EurasiaNet.org. “And if [the authorities] aren’t capable of reacting quickly and effectively, a conflict can quickly escalate into something more terrifying and horrifying.”

Kazakhstan has avoided major ethnic clashes of the type that rocked Kyrgyzstan in 2010, although occasional incidents (like a Kazakh-Chechen conflict outside Almaty in 2007, also sparked by a petty incident) reveal simmering tensions.

For President Nursultan Nazarbayev, harmony between Kazakhstan’s 140 ethnic groups is “our life-giving oxygen,” a cornerstone of his nation-building strategy. This policy is popular with minorities, although Kazakh nationalists complain it is pursued at the expense of the majority—a gripe that carries some traction with ethnic Kazakhs on the ground.

The conflict in Ukraine – especially Moscow’s assertion of its self-appointed right to intervene in foreign countries to protect Russian speakers – has sharpened Astana’s attention toward interethnic relations.

Kazakhstan is a Kremlin ally, but Moscow’s aggressive rhetoric rattles nerves in a country with an ethnic Russian minority of 21 percent nationwide. Ethnic Russians form a majority in some northern towns along Kazakhstan’s long border with Russia, where Astana has a close eye on the delicate ethnic balance. (By comparison, Tajiks form 0.2 percent of the national population; 1.2 percent in South Kazakhstan Region.)

Social disorder is rare in Kazakhstan, where significant unrest last erupted during an oil strike in 2011, ending in a fatal crackdown.

In Bostandyk, the authorities are favoring carrot over stick. No arrests have been reported following the unrest, leaving Tajiks who face huge repair bills questioning the Kazakh rioters’ apparent impunity.

Officials are conducting outreach efforts to prevent interethnic divisions that would be “hard to heal,” said Nazhmiddinov, the elder, and “to stop people from accepting false rumors as true and turning against each other.”

To prevent anyone spreading rumors (a criminal offense, punishable by 10 years in jail), the authorities blocked cellphone networks and Internet access as far away as Shymkent – Kazakhstan’s third-largest city, 120 kilometers away – angering and inconveniencing locals and spawning wild rumors. Meanwhile, national media have virtually ignored the conflict.

The “information vacuum” has backfired, said Sarym, the analyst, “undermining trust in the authorities, sewing enmity and distrust between ethnic groups.”

In Bostandyk and Yntymak, locals from both communities agree the storm has passed, but have a wary eye on the future.

“We’ve always lived in peace with the Uzbeks, Tajiks, Russians,” said Azamat, a Kazakh born and bred in Bostandyk who had no sympathy for the rioters. “But now, who knows what’s around the corner?”