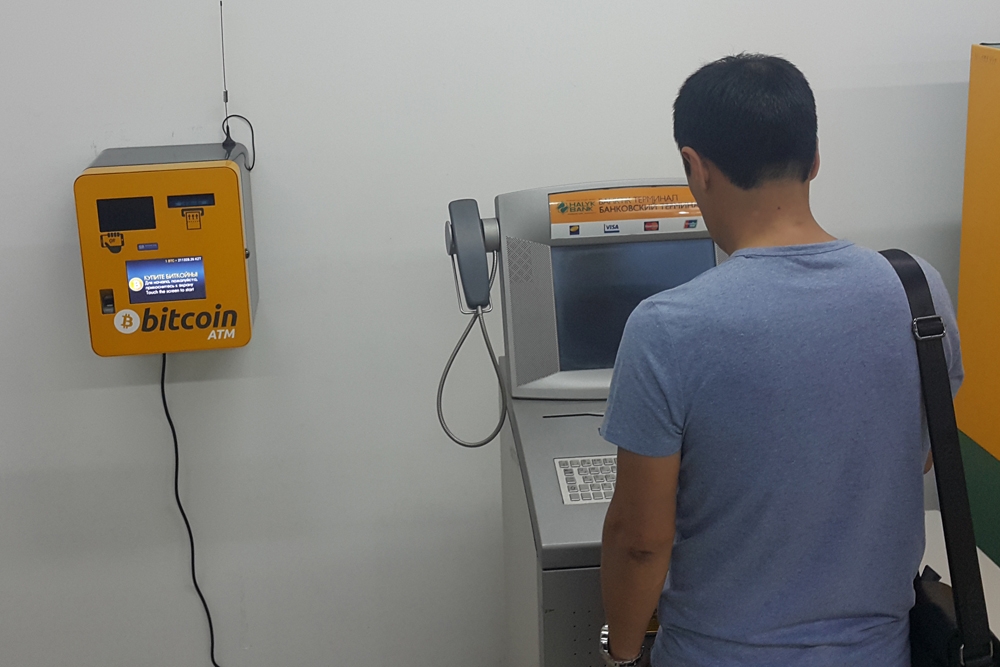 Kazakhstan’s first Bitcoin terminal, installed late last year in the Central Asian nation’s business capital, Almaty. As the terminal’s owner admits, it is not used much yet, but with confidence in the Kazakh national currency at an all-time low, some see an opening for the ascent of digital currencies. (Photo: EurasiaNet)

With confidence in Kazakhstan’s national currency at an all-time low, some see an opening for the ascent of digital currencies, of which Bitcoin is perhaps the best known.

Daniyar Akishev, the youthful head of the National Bank of Kazakhstan, appeared to row against the tide of official wariness on the issue earlier this year, when he revealed that a working group had been created to study what he described as surrogate currencies.

“This is a reality with which we will come up against in the very near future, and ignoring it is not possible,” he said in June.

Government positions on digital currencies have veered in the past between wariness and outright hostility. In 2014, Akishev’s predecessor, Kairat Kelimbetov, suggested that the National Bank could adopt moves to designate Bitcoin a form of financial pyramid scheme.

“This is quite a difficult issue. Some say that this is a form of money laundering and that is therefore completely evil and should be banned, as China’s monetary authorities have done. Others say: ‘Well, let’s have a look, see what happens,’” he was cited as saying by Tengri News.

Backers of the blockchain technology that underpins digital currencies like Bitcoin hail it as a breakthrough in transparency. By serving as a ledger of data available for public scrutiny, blockchain should in principle ensure strong protection from fraud. But the complexity of the technology leaves the uninitiated confused and with a lingering suspicion that unscrupulous practices, or even a sophisticated hack, could lead many to financial ruin.

Akishev has admitted blockchain could come in useful for Kazakhstan. “We are considering the possibility of using the blockchain system, either on the stock exchange or in other areas of payment services,” he said.

Monetary authorities across the world are waking up to the need to get in on the crypto-currency game. In March, Britain’s Daily Telegraph reported how computer scientists have teamed up with the Bank of England to devise their own rival to Bitcoin called RSCoin. As the newspaper noted, the fortunes of crypto-currencies like RSCoin could be helped by the perceived trust factor of state support.

In another signal that authorities in Kazakhstan are catching up, there are moves to draft legislation to regulate digital currencies. A bill could be introduced later this year.

Aivar Baikenov, head of the asset management department at brokerage company Kazkommerts Securities, told EurasiaNet.org that the authorities’ measures are geared toward integrating Kazakhstan into the global economy.

“Introduction of new technologies is being done by most local commercial banks that want to enhance competitiveness. This will increasingly become the case as financial transactions go electronic. It is necessary to ensure the security of transactions. This is necessary not just for local players, but also to potential foreign investors, which are very important to Kazakhstan,” Baikenov said.

Baikenov added that the parent company of his brokerage, Kazkommertsbank, as well as Kaspi Bank and the local affiliate of Russia’s Sberbank, was leading the way in introducing electronic payment technologies. Nurlan Zhagiparov, executive director at Kazkommertsbank, told EurasiaNet.org that the benefit of blockchain technology was that by decentralizing banking, it enables financial services to be performed not just by established banks but also by specialized start-up companies.

This poses fresh challenges for regulatory bodies trying to keep tabs on financial operations carried out without heed for national borders.

Despite growing acceptance, the time for crypto-currencies to go mainstream in Kazakhstan remains a remote prospect for now. A number of banks contacted by EurasiaNet.org said they had no immediate plans to incorporate any kind of crypto-currencies based on blockchain into their payment systems.

“In the Kazahkstani context, it is still too early to talk about this. We need to wait another year, a year-and-a-half for serious projects to appear,” said Zhagiparov, who was director of Kazkommertsbank’s innovative technologies department from 2005 to 2010. “We’re monitoring these developments, but we are not yet using these technologies in our services.”

Yelena Dudka, a representative for Kaspi Bank, said that her company is still at the stage of studying the market and assessing demand among customers.

Another major lender on the Kazakhstan market, ATF Bank, has not even got that far. With the lack of necessary legislation and demand, there is no cause for adopting crypto-currencies as of yet, said Dmitry Schuka, director of digital technology development at ATF Bank.

Nurlan Bekkaliyev, former director of IT at AsiaCredit Bank, said another point to keep in mind is that neither Kazakhstan nor Russia have been receptive to crypto-currencies at the official level. “That said, in Kazakhstan you can exchange, buy foreign crypto-currencies for private individuals — unofficially. But personally I have never used them and do not plan to,” Bekkaliyev said.

For all that, a small group of pioneers have begun dipping their toes into the water.

A self-styled Bitcoin servicing center was set up by Boris Komarov in 2014 in the hopes of popularizing the currency by offering consultancy and intermediary services. “People are slowly getting to know Bitcoin and crypto-currencies, but very slowly. They need better education, which is why I created the first Bitcoin course in Russian for beginners and established First Bitcoin Center to help them. But so far, not many people are asking for help,” Komarov told EurasiaNet.org in emailed comments.

In December, the Bitcoin-focused news website Fork Log reported that a Bitcoin terminal had been installed in a prime location in Kazakhstan’s business capital, Almaty, to purchase units of the crypto-currency. But as the terminal’s owner, Kanat Amrenov, admitted, the launch was more than anything a public relations exercise to get the word out about crypto-currencies.

“The Bitcoin terminal is used, but not in large volumes. Not enough to be able to say that the terminal will soon give a return on the initial investment,” Amrenov told EurasiaNet.org. “But starting in the fall, I hope the figures will be much bigger. And then we can start thinking about extending the network of terminals.”