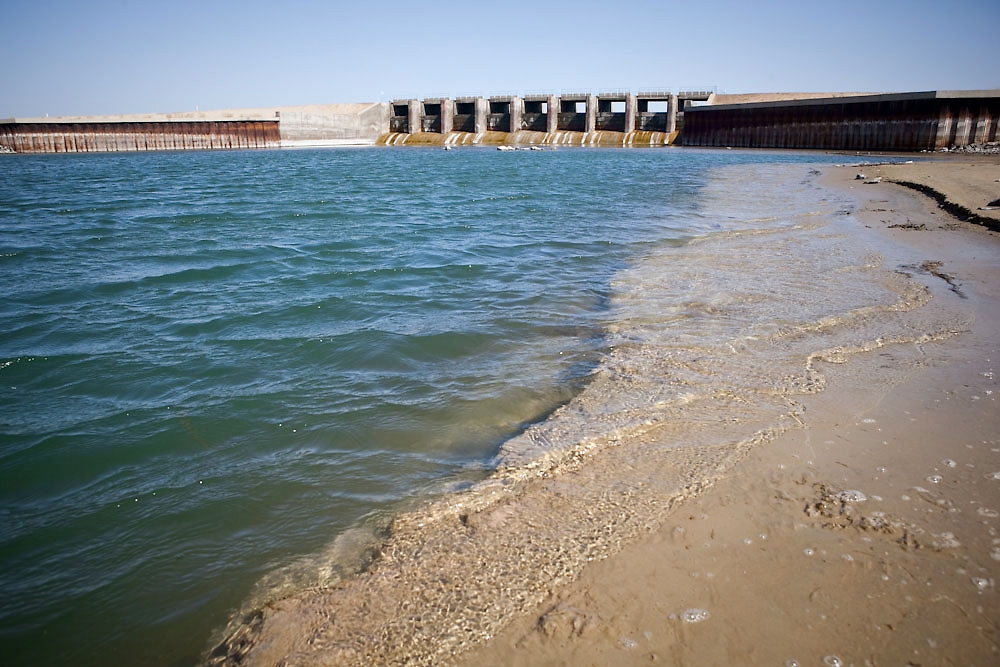 The water level continues to rise in the Northern Aral Sea thanks to the Kokaral Dam and 13-kilometer dike at the southern edge of the recovering lake. As the northern part of the Aral Sea, once the world’s fourth-largest lake, continues to expand, the fishing industry is slowly returning as well. (Photo: David Trilling)

Thanks to one of the worst manmade environmental disasters in recorded history, the Aral Sea is disappearing. But a small section of the sea in the north is reviving – and fish are returning.

When Soviet central planners decided to tap into Central Asia’s two major rivers, the Amu Darya and Syr Darya, to provide water needed to grow cotton in arid Uzbekistan, they signed a death warrant for the Aral Sea. Once the world’s fourth largest lake, at one time the Aral supplied one-sixth of the fish consumed in the Soviet Union. But over the past 50 years, the inland sea has shrunk to less than a tenth of its original size.

With help from the World Bank, Kazakhstan in 2005 built a dam to trap some water in what had been a bay in the north. Critics say the experiment will hasten the demise of the rest of the sea; supporters argue it is the best that can be done at this stage.

It seems to be working.

In August, I tagged along with my younger brother, Michael Bland, who, as part of his undergraduate research at the University of East Anglia, set out to compare salinity levels and water volumes from the same GPS locations as a 2011 expedition mounted by a team from Western Michigan University. When he compiled his statistics in December, Michael found the smaller Aral is making an impressive comeback.

Indeed, the long-running population decline in the region seems to be turning around. Kazakh government statistics show that more than 5,000 people have moved back to the region in the past few years. The area is now home to 72,000 in and around Aralsk, once the major port in the north. Local officials in Aralsk like to showcase a newish cannery, painting it as a symbol of rising hope for the area.

Data from the government-affiliated Kazakh Research Institute of Fisheries shows that the catch from the Small Aral has grown from 695 metric tons in 2005 to 5,595 tons in 2014. The number of species in the sea – some reintroduced, others naturally migrating – has more than doubled.

Twenty-five kilometers beyond Zhalanash, a former port where old fishing vessels now rust away in a desert that was once seabed, wooden boats lilt on the shores of the Small Aral.

The centerpiece of efforts to save the northern sector is the Kokaral Dam, along with its 13-kilometer dike that stretches across the Berg Straits. Until 1973, Kokaral was a 270-square-kilometer island, but with the Aral’s demise, it became an isthmus separating a small part of the northern sea from the main body of water in the south. The fishing industry collapsed; 45,000 people left the northern Aral region from 1980-2000. The $86 million dam was completed in 2005, with the help of a $64.5 million loan from the World Bank, replacing a sand dike built and later restored by locals in the 1990s.

Some environmentalists argue the Kokaral Dam is another nail in the coffin of what is now known as the Southern Aral. But the dam has raised the water level in the northern sector, or Small Aral, by over twelve meters from its 2003 low. A long-mooted plan to increase the dam’s height now looks likely to progress, Nikolay Aladin of the Russian Academy of Sciences told EurasiaNet.org. He called the plan “top secret.” It is unclear who would pay for the undertaking.

“The main sticking point seems to be the form of direct intervention,” said Kristopher White, an expert on the sea at KIMEP University in Almaty, Kazakhstan. “One option involves simply raising the existing dam and dike, which would raise the entire northern Aral Sea level by six meters.”

Another option involves construction of a second dam, raising the sea level further. “In terms of fishing and the overall ecological condition of the sea, raising the existing dam and dike might be preferable,” White said, adding that “observers might rightfully question” why the initial dike wasn’t taller.
Michael Bland’s research found salinity levels at Kokaral to be 6.5-times higher below the dam compared with levels inside the catchment area. That discrepancy suggests that the flow of fresh water into the Small Aral from the Syr Darya remains above the rate of water lost through evaporation. Overall, the salinity levels have fallen throughout the sea compared with samples taken in 2011 by Philip Micklin of Western Michigan University.

Those advocating work to save the Small Aral point out that of the two rivers that once sustained the sea, the Amu Darya, on the Uzbekistan side, dries up before it reaches the Aral. At least the waters of the Syr Darya, which runs through Kazakhstan, still flow into the sea for part of the year.

For the Southern Aral to stand a chance over the long term, Uzbekistan needs to upgrade its inefficient irrigation infrastructure, which is used to cultivate the country’s thirsty cotton crop, scientists say. But Uzbekistan seems reluctant to do so, instead blaming problems on upstream Tajikistan, which hopes to build the world’s tallest hydropower dam.

Meanwhile, the shoreline is creeping closer to Aralsk. Before the building of the Kokaral Dam, the Aral’s waters were 100 kilometers away from the town; now they are only 12.

Stephen M. Bland is a freelance journalist who covers the Caucasus and Central Asia.