Meet Uyatman: a cartoon superhero who patrols Kazakhstan to stop women from behaving "indecently" — and his real-life inspiration. 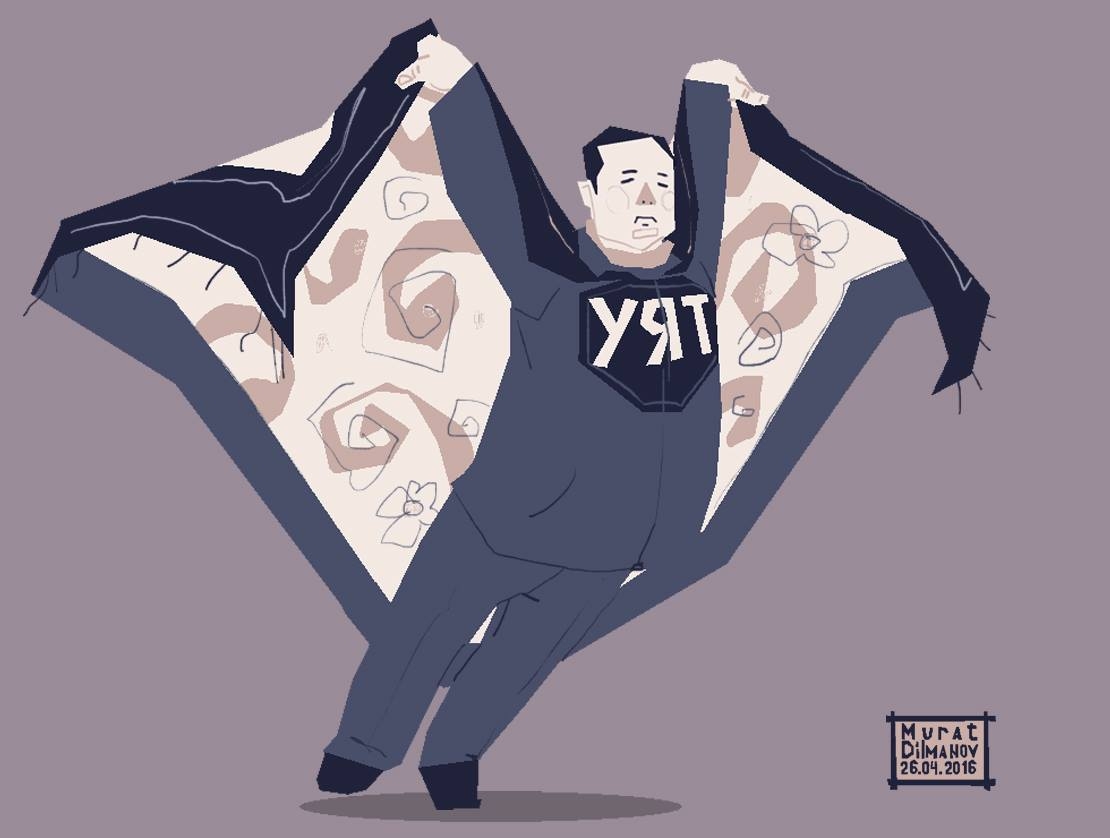 Uyatman, a superhero satirizing the real-life moral guardians in Kazakhstan. (All illustrations by Murat Dilmanov)

A new superhero called Uyatman appeared on the scene in Kazakhstan a couple of years back. As long as Uyatman was on patrol, the public could rest safe in the knowledge that women would not be caught out and about behaving indecently.

Uyatman was the brainchild of cartoonist Murat Dilmanov, who developed the character as a way of poking fun at a creeping mood of censoriousness in the country. The superhero’s name was a waggish compound of the word uyat (shame) and man.

In the past weeks, there has been another wave of moralizing vigilantism that suggests the trend shows no sign of abating, and may even be deepening. It all began when Aizhan Baizakova, a 22-year old actress and social media celebrity, was thrown into jail for three days on charges of hooliganism after a party on December 17 at her Almaty nightclub, Zakova, got out of control. Law enforcement officials acted after receiving a tip that Baizakova had offered cash prizes to tempt women partying at her club to strip naked onstage.

More indignation followed. Baizakova was inundated with abuse and threats of violence. A video widely shared online showed a group of burly men, a couple of them uneasily clenching their fists, making a collective statement of condemnation of Baizakova and her actions. The only person speaking in the video, an unnamed middled-aged man in a padded blue jacket, issued a sweeping condemnation of female promiscuity and enjoined Kazakh men to stop women from indulging in such behavior.

“To strip and then wear a saukele [traditional Kazakh bridal headdress]. What is this disgrace and shame? We address this video to anybody who has honor and pride. Support us!” the man in the video says.

Sure enough, a few days before New Year, a large group of rowdy men turned up for an impromptu rally outside the Zakova nightclub.

“Can we not forbid this kind of thing? If they had not arrested her for three days, we would have gone in and smashed up her club,” Talgat Ryskulbekov, a rabble-rousing activist with a conservative group called Zheltoksan Ruhy, told reporters at the scene.

A few days later, Baizakova relented and closed up shop. She had fallen victim to uyat, the label used to describe the phenomenon of public shaming campaigns — almost all of which are directed at women.

The archetypal uyatman — the term has now entered popular usage — and the inspiration for Dilmanov’s cartoon character was one Talgat Sholtayev, who enjoyed a brief flash of notoriety in 2016. In spring that year, social media users got hot under the collar after a statue depicting a man and a woman chastely standing side by side was unveiled at a central location in the capital, Astana, not far from the president’s palace. Prim denizens were shocked that the female figure was sculpted in a flowing but slight gossamer garment showing the outline of her body — a detail that they felt was a shameful to the honor and dignity of Kazakh women. Authorities shrugged off the complaints, insisting the monument violated no rules on indecency.

Not happy with that, Sholtayev amended the monument by shrouding it in a colorful robe that he felt protected not just the statue’s modesty, but that of all Kazakh women.

“To be quite honest, it is shameful even to look at it,” Sholtayev told KTK television station at the time. “It breaks my heart. Most of all, this dishonors our mothers and sisters.”

Drawing inspiration from this episode, Dilmanov recast Sholtayev as Uyatman, a slightly plump character complete with a dreary grey suit and a weaponized cape in the colors of the robe used to cover the Astana statue.

The superhero is a satirical creation, but the underlying intent behind it is serious. Dilmanov told Eurasianet.org that he believes that moral guardians are doing little but restricting people’s basic freedoms.

“Uyat in Kazakhstan comes in different shapes — it can be creative and destructive. In the first instance, it is to educate children. In the latter, it is about harassment and aggression,” Dilmanov told Eurasianet.

Asel Bayandarova, a doctor from Almaty, is the poster girl for everything that uyatmen despises. She is vocal about the rights of Kazakh women to live freely as they choose and, for good measure, she regularly poses in scanty dress in photoshoots for glossy magazines.

Bayandarova first achieved notoriety for an April 2016 status update on Facebook in which she declared that Kazakh women should not have to submit to the “stupid” conditions of traditional society. The text was accompanied by a selfie of Bayandarova wearing just the bottom half of a two-piece swimming suit. The message was a calculated provocation and had the desired effect — 20,000 likes, 8,000 comments and 1,000 reposts. Responses were a mix of crude insults and whole-hearted messages of endorsement.

In the wake of that post, other social media users replicated Bayandarova’s stunt in a pointed protest against the outrage expressed by moralists.

“A woman in Kazakhstan does not feel free. You have to be very strong to resist the pressure of society. For regular women, it is hard to take that weight,” Bayandarova told Eurasianet.

Uyat, said Bayandarova, is a result of infantilism and immaturity in society at large in Kazakhstan.

But those who argue in favor of a moral resurgence, like Nurbol Akhanov, a doctor at the National Research Center for Cardiac Surgery in Astana, said that fighting promiscuity is indispensable for the good of the country.

“There’s a saying: ‘If a man is spoilt, it destroys a family. If a woman is spoilt, it destroys a nation.’ We are not just dealing here with the disintegration of moral, cultural values,” Akhanov told Eurasianet. “The main audience affected by this behavior are teenagers, who have weak powers of critical analysis and copy certain examples just to be trendy. And that is how we get the rising numbers of abortions and teenage pregnancies in Kazakhstan, and the spread of sexually transmitted diseases and HIV.”

There is certainly nothing new about morality panics, although the way collective opprobrium plays out has changed dramatically. As publicist Madi Mambetov has noted, if the image of the self-appointed moral guardian in Kazakhstan was traditionally one of a tut-tutting granny sitting on a bench outside an apartment building, that role has been taken over by mainly young, self-identified heterosexual, ethnic Kazakh men. And the shaming campaigns, as almost everywhere else today, first pick up momentum online.

In 2016, when video footage surfaced of a young woman, Danara Kulzhanova, carrying Kazakhstan’s national flag at a gay parade in New York, the reaction was immediate. Such was the onslaught of online abuse that Kulzhanova felt compelled to delete her online accounts.

Gulmira Ileuova, president of Almaty-based Strategy Center for Social and Political Studies, contends the underlying explanation is that Kazakhstan is a predominantly rural society dominated by patriarchal and conformist attitudes. In the absence of a coherent and unifying cultural idea — and failure by the government to provide direction on that front — people assert their identity in a spontaneous and ad hoc fashion, Ileuova said.

That frequently gives rise to confused priorities and skewed values.

"It is easier for a girl in Kazakhstan to have a baby and then abandon it, than to raise the child outside marriage. In this moral system, the first seems more decent than the second, strange as it may seem, since local morality forbids a girl from engaging in sexual relations before marriage,” Ileuova told Eurasianet.