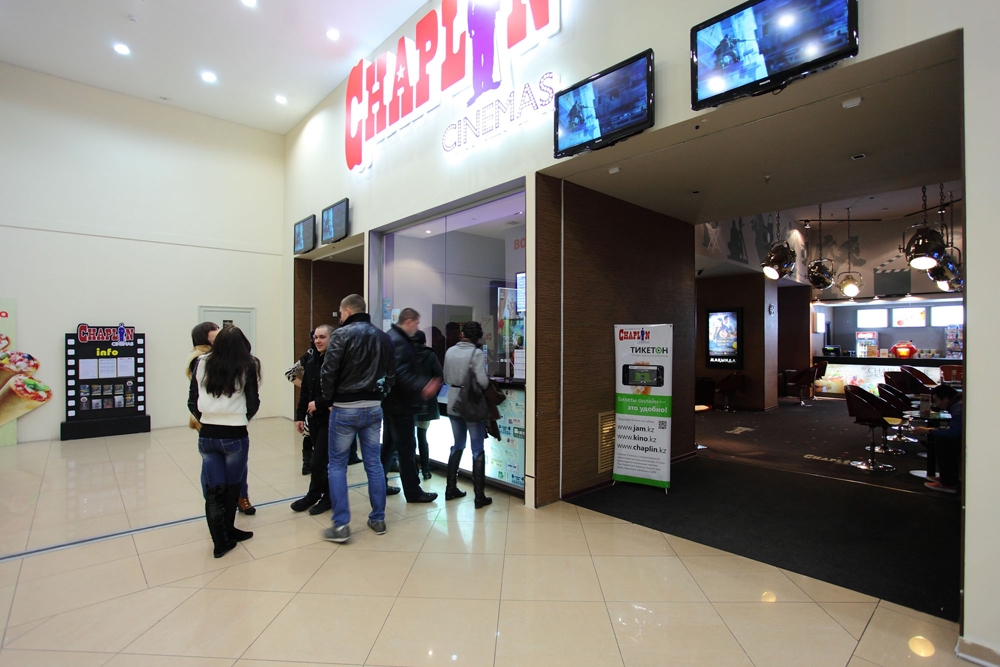 The Chaplin ADK cinema in Kazakhstan’s business capital, Almaty. Parliament is now considering legislation that would require that film distributors and cinemas ensure all foreign-language movies released in Kazakhstan are provided with dubbing, or at least subtitles, in Kazakh. But there are signs that filmgoers, as well as many within the cinema industry, are resistant to such a move. (Photo: CityKey.net)

When Kazakh speakers went to the movies last year to catch up with the latest Avengers blockbuster, they saw Jeremy Renner playing the superhero Hawkeye on-screen, but the character's voice belonged to Bakhytzhan Zharmuhambetov.

Dubbing is nothing new for Kazakhstan. But to have glossy Hollywood fare played out in the Kazakh language is still a rarity.

Parliament is now considering legislation that would require distributors to make movies more accessible to Kazakh speakers. If a legislative bill currently making its way through the lower house of parliament is passed, new rules could be in place by January 1, requiring film distributors and cinemas to ensure all foreign-language movies released in Kazakhstan are provided with dubbing, or at least subtitles, in Kazakh.

One of the film dubbing bill’s sponsors, Shaimardan Nurumov, asserts that the legislation, if approved, would enhance public engagement among the Kazakh-speaking section of the population. Another aim is to broaden the use and understanding of Kazakh.

But there are signs that filmgoers, as well as many within the cinema industry, are resistant to such a move. The preponderance of the Russian language in Kazakhstan, particularly among filmgoers, is seen as a significant hurdle.

According to the National Digital History of Kazakhstan, a national census carried out in 2009 revealed that 84.4 percent of the population speaks Russian, while 94 percent can understand spoken Russian. Conversely, many Kazakhstanis, even many ethnic Kazakhs, who have studied in Russian schools, have trouble understanding or expressing themselves in Kazakh.

This is a situation that does not sit well with the government, which is seeking to bolster the status of the state language, as Kazakh is designated, through legislation intended to gradually transition toward greater use of Kazakh in official state documentation, in mass media and in schools.

This is not the first attempt to pressure the film industry into helping popularize the Kazakh language among a broader swathe of the population. In 2012, the government adopted a rule making it mandatory for film distributors to dub movies into Kazakh. Financial realities meant the rule could not be upheld, however, and so it was quietly forgotten.

Dubbing is a costly affair. One recent high-profile movie dubbed into Kazakh was the 2014 US sci-fi comedy action movie Guardians of the Galaxy. Voicing the movie in Kazakh cost around $100,000, according to industry insiders. It is perhaps not surprising then only a dozen or so movies have been dubbed into Kazakh since the adoption of the 2012 law — and even those efforts were only made possible with funding from the government-backed Bolashak Association.

The latest legislation allows for a modicum of compromise by letting studios consider options like subtitles or voiceovers.

Baurzhan Shukenov, director of the Arman cinema chain, told news website Vlast.kz that the option of subtitles was preferable since this would not force distributors to decide whether to focus on Kazakh- or Russian-speaking audiences.

Also speaking to Vlast.kz, Marina Yershova, director of the Sulpak cinema chain, agreed. “If they advance these conditions – either dubbing or voiceover – then we will lose around 50 percent of our content, because the budget of many films does not allow for doing dubbing or voiceovers. If we are also offered the choice of subtitles, we are for it,” Yershova said.

Films out of Hollywood or other foreign markets that are released in Kazakhstan are almost universally dubbed into Russian by studios in Russia, thereby saving distributors in Kazakhstan the trouble of having to do any additional work.

And market data shows that films in Russian remain the most appealing.

“We know of cinemas that have put on showings of movies in Kazakh and Russian in parallel in the primetime slot and almost all viewers went to the showing in Russian,” Yershova said.

If business is cool over the government’s dubbing proposal, workers in the creative industry are more favorable.

Timur Balymbetov, a television producer responsible for the dubbing on Guardians of the Galaxy, told EurasiaNet.org that he sees younger generations growing increasingly comfortable with Kazakh. Many young filmgoers were pleasantly surprised when they found out that they were able to watch a Hollywood blockbuster in their own language, Balymbetov said.

“Guardians of the Galaxy … demonstrated a serious demand for quality dubbing that would not ruin the value of the entertainment. We had to rethink the jokes in ways that would be understandable to Kazakh-speaking audiences while retaining the original meaning. And when the audience would burst into laughter, that was the greatest reward for our efforts,” Balymbetov said.

Because of the greater returns on Russian-dubbed movies, however, cinemas often schedule the Kazakh language option in inconvenient time slots. Balymbetov predicted that, with time, cinema chains will increasingly come to respect the needs of Kazakh speakers.

“Subtitles are a possibility, but this is a compromise for those among our viewers used to quality film dubbing. Showing three or four movies a year in Kazakhstan, as happens at the moment, is not solving the problem,” Balymbetov said.

Still, the sheer volume of work required to process translated content — even if only subtitles — is sure to become a headache for distributors. A polished dubbing job can take between six and eight weeks. As Balymbetov explained, dubbing requires a small army of staff, from sound engineers to dubbing mixers, and actors to translators. And the number of people required to do this properly simply does not currently exist in Kazakhstan.

Most dubbing in Kazakhstan is handled at the moment by a single Astana-based company, Aray Media Group, which has signed deals with global movie giants like The Walt Disney Company and Sony Pictures. Some recent releases under Aray Media Group’s belt include the Star Wars re-boot, The Jungle Book and Alice Through the Looking Glass.

Aray Media Group projects manager Madina Abisheva is bullish about the ability of local talent to meet demand. “We have enough local talent — it is just a matter of training and nurturing them. So if previously we used experienced specialists from Almaty, now we try to draw on local talent, so as to avoid transport and accommodation costs,” Abisheva said.

That spells bad news for the Kazakh voice of the Avengers’ Hawkeye — Almaty-based voice artist Bakhytzhan Zharmuhambetov. “Last year, I flew to Astana four times for re-recordings. The costs were covered by the studio. But that proved too expensive, so they are looking for local specialists. When it came to doing the dubbing for The Jungle Book, nobody called me,” Zharmuhambetov told EurasiaNet.org.

All the same, Zharmuhambetov remains a supporter of the legislation to translate movies into Kazakh. It is particularly urgent, as there are so many Kazakhstanis that cannot speak a word of Russian, he said. Those include ethnic Kazakhs from China and Mongolia — known as Oralman — that moved to Kazakhstan at the government’s encouragement following the collapse of the Soviet Union.

“To be honest, my family always watches movies and TV shows in Russian because there are few Kazakh language channels, and the ones that exist are boring. But if they start to show interesting and quality movies in our native language, I will become an eager cinephile,” Zharmuhambetov said.