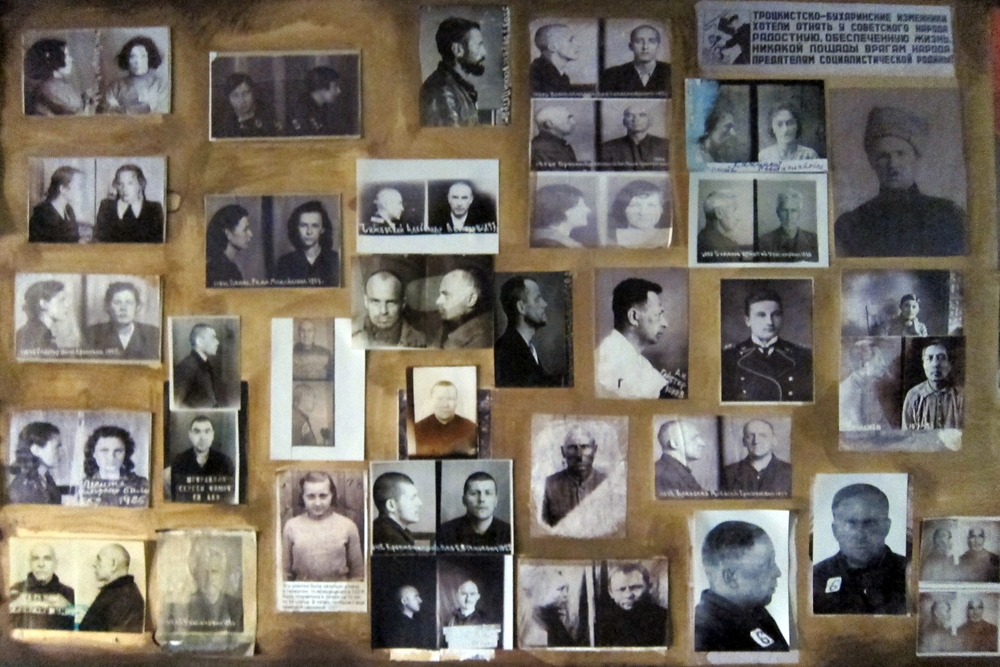 Mugshots of prisoners from the time of the Karaganda gulag (Karlag) are displayed in the Dolinka Museum for the Commemoration of Victims of Political Repression. (Photo: Joanna Lillis)

In a sleepy backwater spot on central Kazakhstan’s steppe, an imposing neoclassical building topped with a red star stands as a testament to the country’s totalitarian past.

This is the village of Dolinka, which was once the heart of the Karlag prison camp, a cog in the Soviet Union’s sprawling gulag system. From the time it opened in 1931 until its closure in 1959, at least a million people passed through Karlag, an abbreviation for the Karaganda Corrective Labor Camp. Karlag wasn’t just one camp, but a chain of them – spread out over an expanse of steppe roughly twice the size of Belgium.

Located 50 kilometers from the industrial city of Karaganda, this elegant gray building served decades ago as the camp’s processing center, primarily handling those caught up in former Soviet dictator Joseph Stalin’s purges. Nowadays, it is known as the Dolinka Museum for the Commemoration of Victims of Political Repression. It opens a window not only on prisoners’ sufferings, but also on the tumult of the Stalin era, a period that left an indelible mark on Kazakhstan’s national psyche.

The building’s facade displays a picture of hands clutching barbed wire. Inside stands an eerie portrait of Stalin. Hallways are lined with hundreds of case files of hapless victims who passed through the camp, and mug shots hanging on the walls of exhibition rooms show plenty of frightened faces. The exact number of Karlag’s inmates has not been established. Many documents relating to the Soviet Union’s prison camp system remain classified, and much about Karlag’s operations remains unknown.

Under director Svetlana Baynova, the museum’s researchers rely on declassified documents and the personal recollections of locals. The result is a thoughtful interpretation of a troubled history that avoids black-and-white perceptions in favor of a nuanced approach.

The museum accentuates an often overlooked aspect of the past -- the long-term impact on Kazakhstan’s national identity of the gulags, as well as damaging Soviet policies of the late 1920s, 30s and early 40s.

There is a hall dedicated to the devastating 1930s famine, caused largely by the imposition of the collectivization of agriculture on Kazakh nomadic herders. It contains haunting photographs of gaunt victims and shocking documents testifying to starving people being driven to cannibalism. An estimated 1.5 million people – a quarter of Kazakhstan’s population at the time – perished. Another 1.3 million moved to other areas of the Soviet Union, or emigrated to countries such as China and Iran.

Another room charts the deportations of ethnic groups from other parts of the Soviet Union, beginning with Poles from Ukraine in 1936 (75,000 ended up in Kazakhstan). Subsequent national groups forcibly resettled en masse included Germans (441,713 deported to Kazakhstan), Koreans (102,000), and Caucasus peoples, particularly Chechens and Ingush (89,901).

Famine and deportations, and the in-migration of workers from elsewhere in the Soviet Union, left ethnic Kazakhs a minority in their titular republic by 1939. They remained in the minority throughout the rest of the Soviet era. Today, Kazakhs once again comprise the majority (65 percent) of the population, and Astana paints the country’s multi-ethnic character as one of its strengths. But demographics remain a sensitive political issue to this day.

As in other Soviet gulags, Karlag’s prisoners engaged in slave labor. The mind-numbing, physically-exhausting daily routine was chronicled by one of Karlag’s most famous prisoners: Soviet dissident writer Alexander Solzhenitsyn, whose experiences at a camp in the Ekibastuz coal basin inspired the novella One Day in the Life of Ivan Denisovich. Karlag was part of what Solzhenitsyn dubbed The Gulag Archipelago, the title of another of his famous works.

The gulag system transformed the steppes of Kazakhstan into an industrial hothouse. Inmates built up the infrastructure of mining and metallurgy industries that are still important parts of the country’s economy – and which have also blighted its environment.

Agriculture was another important sector, with prisoners presented with the daunting task of growing food on the barren steppe to feed the region’s growing population. On the academic front, jailed scientists conducted groundbreaking research in the camp’s laboratories.

Installations in the museum’s spooky cellar depict chilling reconstructions of how prisoners were treated. There is a pit that staff believe may have served as an underground solitary confinement cell (known as a zindan, the word for a dungeon in pre-Soviet Central Asia), and a room with meter-thick walls that could have been a torture chamber.

The walls of Karlag’s former library display reproductions of prisoners’ memoirs. “Let my hand against its will convey the horror, convey the unimaginable and indescribable nature of what is hidden behind the words ‘prison’ and ‘camp’,” wrote one ex-inmate.

The point of the museum is to commemorate the victims of a brutal, dehumanizing system, Baynova says, “so that such repressions are never repeated, so that the younger generation knows about the monstrosities of the past.”