Kazakhstan: Mystery of khan’s remains close to being solved?

Kenesary’s ascendancy to the status of national hero arrived with independence. 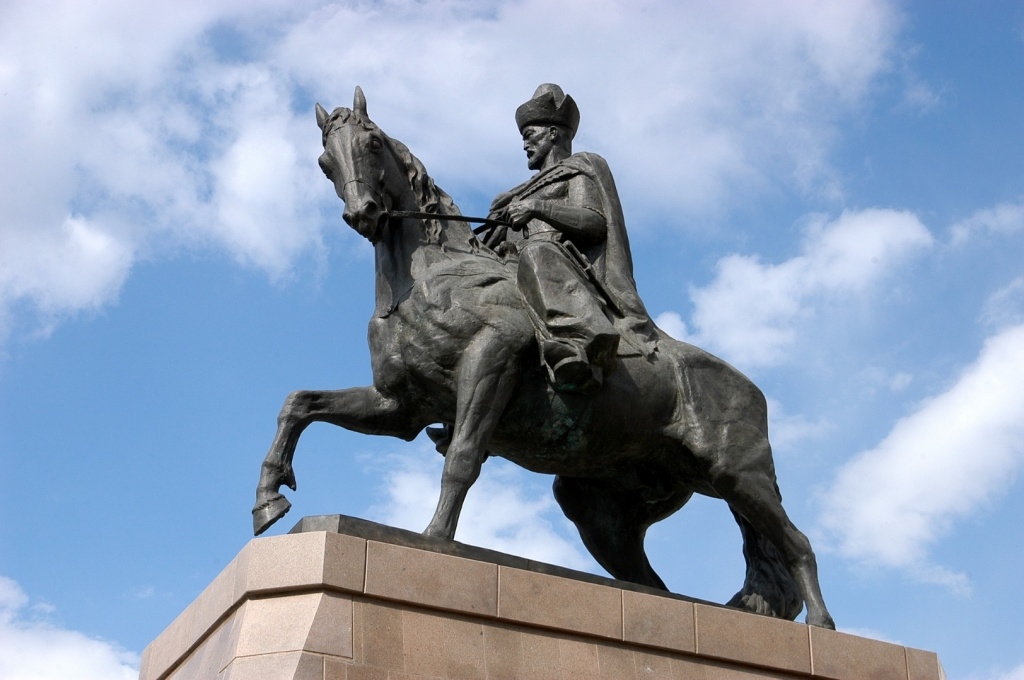 A statue of the khan in Kazakhstan’s capital (government website)

When the president of Russia met in July with Kazakhstan’s former leader, Nursultan Nazarbayev, their conversation covered the usual topics of security and trade.

But then Nazarbayev made an unusual request. Could Vladimir Putin help, he asked, to return the severed head of a 19th century Kazakh liberation fighter?

The only problem is that it is not known for certain where Kenesary Kasymov’s head has ended up.

Some patriotic Kazakhs are enthused by the news of Nazarbayev’s plea.

“I hope our khan’s head is finally going to be returned to its homeland,” Marat, a cook at chicken wings food stand in Almaty, told Eurasianet.

His colleague, Ilyas, was less optimistic.

“I don’t think this will happen, our [officials] have already tried many times,” he said.

This is true. Former Kazakh Prime Minister Karim Masimov, now head of the security services, brought up the issue with his then opposite party Dmitry Medvedev during talks in Sochi in 2016, but it came to nothing.

Kenesary is in Kazakhstan more myth than history.

By the 1830s, the Russian Empire had already extended its writ over the steppe, building fortresses and expanding its influence. The new dispensation gradually eroded the nomadic way of life and the authority of the khans – a fact that provoked regular surges of violent resistance.

The Kazakh rebel’s quest was a quixotic and bloody attempt to lift that yoke and revert to the loose nomadic form of governance that had existed before the Russians arrived. His campaign was doomed, however.

For the Soviet historian, Kenesary was an ambivalent figure: part reactionary traditionalist, but also a champion of popular liberation. In the postwar years, however, his story was largely ignored.

His ascendancy to the status of national hero arrived with independence. Villages, streets and schools are named after him, and the capital, Nur-Sultan, bears a statue of Kenesary astride a horse.

What Kazakhs lack is a shrine where to pay their respects.

The tale of how Kenesary’s remains disappeared is murky, while the fact of his death in the first place is cause of lively bickering to this day between Kazakhs and people in neighboring Kyrgyzstan.

As he retreated from the advance of Tsarist troops, Kenesary is said to have sought alliances with northern Kyrgyz tribes. But the leader of the Sarybaghysh tribe, Ormon, had by this time peeled away from the anti-Russian alliance. Battles between Kenesary and Ormon’s men led to the capture and execution of the former around 1847. Some sources maintain that the Kyrgyz tribesman beheaded Kenesary and handed this grisly trophy to the Russians as a gesture of their loyalty.

There are Kazakhs who nurse the insult as though it had happened yesterday. Arguments over the episode between Kazakhs and Kyrgyz occasionally flare up on social media.

At times, professional historians get stuck in too. Last July, Burkitbai Ayagan, the deputy director of the Kazakh Education Ministry’s History Institute, wrote an article complaining about how Kyrgyz textbooks were providing “unfortunate and biased” accounts of the Kenesary story.

The real animus, however, is reserved for Russia, which is perceived as dragging its feet over the rebel’s remains.

By most accounts, the severed head may be located somewhere in the old imperial capital of St. Petersburg, either in the Museum of Anthropology and Ethnography, better known as the Kunstkamera, or the State Hermitage Museum. Both museums deny they have ever owned any items connected to Kenesary.

Another theory is that Kenesary ended in a local history museum in the city of Omsk, a central Russian city just north of the Kazakh border. That museum too has in the past denied possessing the head.

Ualikhan Kaisarov, a former senator and the head of the Kenesary Khan Foundation, is convinced that the head of the doomed Kazakh khan is hidden somewhere within the Diamond Fund, a collection of valuables stored in the Kremlin Armory.

“This is a very secure place where access to outside researchers is limited,” he told Eurasianet earlier this year. “After the December [1986] protests of Almaty youth against the communist regime, the head was handed over to the KGB, which was determined that the […] growth of the national consciousness of the Kazakh people should not be permitted.”

Matters took another turn last month with media reports of a fresh lead. Several outlets cited experts, not all named, as saying that Kenesary had after all been tracked down to Omsk.

News website Orda cited three independent sources as saying documentation discovered with remains held at an unspecified Omsk museum appeared to confirm their authenticity. The website went further and hinted at some intrigue. In April, it said, the director of Almaty’s Valikhanov History and Ethnology Institute, Ziyabek Kabuldinov, posted a message on Facebook to say that Kenesary’s head had been found, only to delete his note some hours later.

Kabuldinov has in recent days confirmed to reporters that he was bound by a nondisclosure agreement, thereby appearing to confirm that he was indeed part of a group of Kazakh researchers invited to travel to Russia earlier this year on a classified mission to help verify what had purportedly been unearthed in Omsk.

Should further investigations yield the sought-after answers, all that would remain is for the Russians to surrender the head.

For self-described patriots, the return of Kenesary is a matter of honor.

“That the head of our khan should become a museum exhibit in a foreign state would be a disgrace for the Kazakhs,” Zhasulan Musin, a resident of Nur-Sultan, told Eurasianet. “We need to return the remains at all costs and bury them with honors, so that Kenesary’s soul may find peace.”

Kaisarov of the Kenesary Khan Foundation worries, though, that Russia may be reluctant to give up the artifact because the country is, in his opinion, perpetuating the Soviet policy of suppressing the Kazakh national spirit.

“Although 30 years have passed since the collapse of the Soviet Union, we are still under the influence of Russia,” he said. “Most of our officials are former communists with Soviet mindsets for whom the Kremlin is an older brother who must be obeyed.”

Kaisarov’s language may be emotive, but there is some basis to what he is saying. Since last month, the Russian political scene has been in a state of ferment over what are perceived as unreasonable demands by nationalists in Kazakhstan and Kyrgyzstan for people working in the service industry of those countries to be able to communicate in the local language.

Critics of the clamor around Kenesary, meanwhile, describe the whole thing as a distraction from more pressing social and economic problems. Murat Telibekov, a political activist, told Eurasianet that he sees the campaign to repatriate the late khan as an attempt to instill ideological fervor and inject a mood of optimism into the public in otherwise dismal times.

“Why do people need the head of Kenesary, if sometimes they do not have enough bread?” he said. “Just because you return the remains of this khan to his native land, will the land become more fertile, will livestock breed faster, and will corruption become a thing of the past?”