The ex-president's daughter and grandson hold $103 million in real estate assets in London. 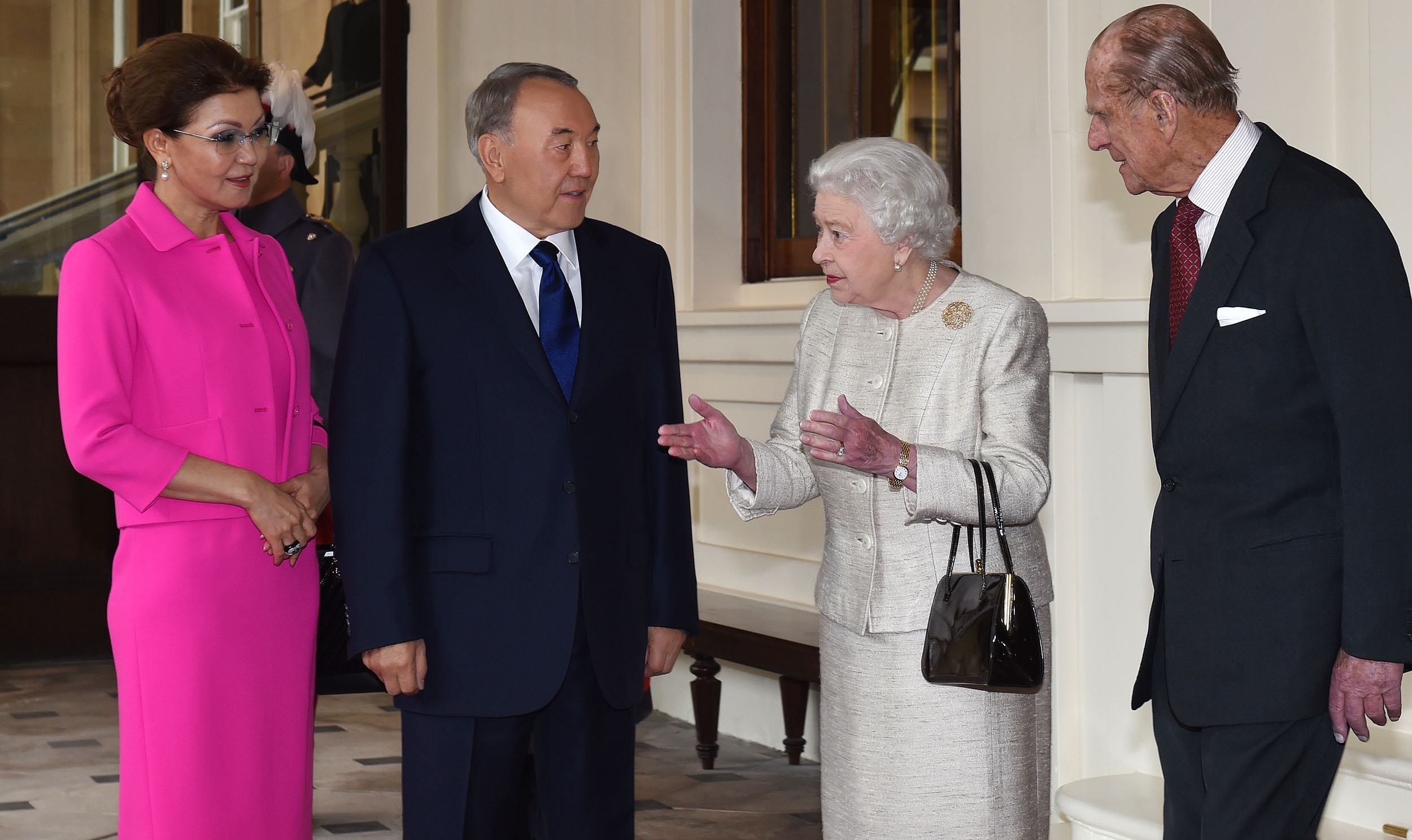 Royal family: Dariga Nazarbayeva, left, with her father, former President Nursultan Nazarbayev, meeting the queen during a trip to London in 2015. (Photo: Akorda.kz)

The proceedings, reported by the BBC on March 10, revealed that assets owned by Dariga Nazarbayeva, the speaker of the Senate and the president’s daughter, and her son, Nurali Aliyev, include two mansions and luxury apartment – the latter including an underground pool and a cinema – worth a total of £80 million ($103 million). One mansion, situated on London’s Bishop Avenue, which is popularly known as "Billionaires' Row,” features 10 bedrooms, an underground pool and a cinema, the BBC reported.

As has now emerged, items of real estate owned by the Nazarbayevs through offshore companies – based in Panama, Anguilla and Curacao – were last May made subject to legislation enacted in 2018 that requires beneficiaries of large funds to explain the origin of their wealth or risk having their assets seized. The National Crime Agency, or NCA, suspects that all three dwellings owned by the Nazarbayevs were purchased with funds acquired through the corrupt acts of Rakhat Aliyev, the late husband of Nazarbayeva and Nurali Aliyev’s father.

Aliyev, the former son-in-law of President Nursultan Nazarbayev fell out of favor in dramatic fashion in 2007. He left the country and lived variously in Austria and Malta. In 2014, he was jailed in Austria pending extradition proceedings as Kazakhstan sought his repatriation to face murder and kidnapping charges. In 2015, before that legal process could play out, however, Aliyev was found dead in his cell. Authorities concluded that he had committed suicide by hanging himself.

Nazarbayeva has reportedly denied that her former husband had any involvement with the acquisition of the real estate. In a statement sent to Eurasianet, Nazarbayeva's spokesperson said "she has furnished the NCA with all the information it needed to conclude she has not been involved in any wrongdoing and there was no merit to their case."

A lawyer for Nurali Aliyev, meanwhile, has said that they are assisting "the NCA by providing them with relevant information in relation to this case."

"He is now challenging the NCA’s approach and will robustly defend the proceedings. He is looking forward to this matter being concluded swiftly in court," the lawyers said in a statement provided to Eurasianet.

The extended Nazarbayev family has been struggling to keep its name out of the international tabloid press.

In late 2018, it was another Nazarbayeva and Aliyev’s sons, Aisultan Nazarbayev, who got the attention. After a yearlong disappearance, presumed to have coincided with a stint in a drug rehab clinic in England, he resurfaced to leave cryptic remarks on Facebook about having been freed from captivity by Russian law enforcement authorities.

Earlier this year, he provoked another swell of chatter with even more eccentric claims on his Facebook page, including that he had not been fathered by Rakhat Aliyev, but instead by his own grandfather. In later messages, he made allegations of corruption against top officials close to the former president.

In light of Aisultan Nazarbayev’s history of drug abuse and erratic behavior, however, the claims have been treated with skepticism. One exception has been the exiled regime foe Mukhtar Ablyazov, whom Information Minister Dauren Abayev implied might have played a direct role in cooking up the allegations in the first place.

In the fall of 2017, Belgian high-end realtor Ignace Meuwissen let slip in an interview that one of his clients, an official in the government of Kazakhstan, had purchased apartments in the center of Paris for 65 million euros ($76.5 million at the time).

This revelation caused a minor sensation back home, prompting many to wonder how officials were able to accumulate such obscene wealth while the government often struggles to provide basic service in key areas like healthcare provision.

Meuwissen’s remarks also set off a guessing game, since he demurred when asked to divulge the name of the owner of the luxury apartment. Many speculated that a likely candidate was another presidential son-in-law, Timur Kulibayev, who is known to be one of Kazakhstan’s richest men.

In the summer of 2018, though, the Finance Ministry said it had found following an investigation that the owner of the apartment was not in fact a government official, that he had paid all taxes due for the transaction and that he was therefore acting within the law. And that, therefore, it was implied, nosey members of the public need not continue asking questions.

British courts, it seems, take another view on the matter of unexplained and inexplicable wealth.

This article was updated to include statements from lawyers representing Aliyev and Nazarbayeva and to correct minor misrepresentations about proceedings in the London High Court.