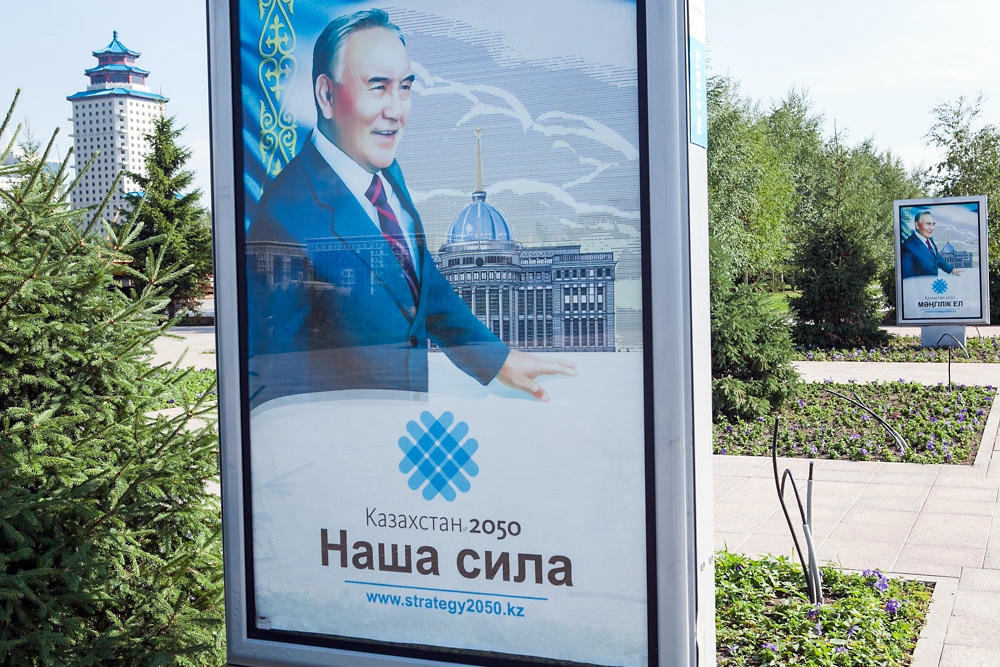 A billboard poster in Astana with Kazakh President Nursultan Nazarbayev and the slogan “Our Strength” emphasizes the country’s Strategy 2050 project that focuses on renewable energy. Regional analysts are unsure how committed Kazakhstan really is to pushing and promoting green energy. (Photo: David Trilling)

From small villages to big cities, wherever you go in Kazakhstan these days, billboards offer reminders that Astana is gearing up to host Expo 2017, the next World’s Fair. Kazakhstan helped secure the right to host the event with a pledge to emphasize green energy alternatives. But now it appears that Kazakhstan is red-lighting its own green transition.

Green energy has been the rage in Kazakhstan in recent years, but the country’s strongman president, Nursultan Nazarbayev, seemed to shift gears out of the blue in late September. “I personally do not believe in alternative energy sources, such as wind and solar,” the Interfax news agency quoted Nazarbayev as saying on September 30 during a meeting with Vladimir Putin in the Caspian city of Atyrau. And echoing a familiar Kremlin refrain, Nazarbayev added that “the shale euphoria does not make any sense.”

For a country where the decisions of one man set the political agenda, it was a stunning change of course. Only last year, Nazarbayev’s office pledged to spend 1 percent of GDP, or an estimated $3-4 billion annually, to “transition to a green economy.”

“Kazakhstan is facing a situation where its natural resources and environment are seriously deteriorating across all crucial environmental standards,” stated a widely touted “Strategy Kazakhstan 2050” concept paper. A “green economy is instrumental to [a] nation’s sustainable development.” Moreover, a switch to renewables would free oil and gas for more lucrative exports, rather than subsidized domestic use.

While Kazakhstan generates 80 percent of its electricity from coal, state media has trumpeted the potential of green energy, showing Nazarbayev touring a solar-panel factory under construction or an official promising Kazakhstan will build the world’s first “energy-positive” city. Officials often talk of weaning Kazakhstan’s economy off its hydrocarbon dependence. Ultimately, if Nazarbayev wants to fulfill a pledge to make Kazakhstan a middle-income nation by 2030, officials have acknowledged that Kazakhstan must diversify its energy sources.

So Nazarbayev’s comments have left analysts scratching their heads: Is Kazakhstan’s focus shifting, or was Nazarbayev just reminding trade partners – especially Russia – that oil and gas will remain a priority for Astana? Nazarbayev concluded by saying that “oil and gas is our main horse, and we should not be afraid that these are fossil fuels.”

Context is key, according to Marat Koshumbayev, deputy head of the Chokin Kazakh Research Institute of Energy in Almaty. “While sitting next to [Putin], it is normal that Nazarbayev would emphasize fossil fuels. It’s worth noting that during similar events in the West, the focus is still on renewable energy, efficiency, and reduction of carbon emissions,” Koshumbayev told EurasiaNet.org.

The energy networks of Kazakhstan and Russia are strongly interconnected. Most Kazakh oil exports to Europe go through the Russian hubs of Samara and Novorossiysk, while Russian oil flows through Kazakhstan’s pipeline network to China. In addition, Kazakhstan is a key cog in Putin’s pet project – the formation of a Eurasian Economic Union.

Although the context of the meeting may have played a role in Nazarbayev’s declaration, the president has sown doubt about how serious Kazakhstan is about green energy, said Luca Anceschi, an expert on the country at the University of Glasgow. Despite the great efforts that were put into branding Astana Expo 2017 as the virtuous, green choice of an oil-exporting country, Nazarbayev’s remarks reveal “that the rhetoric around the Expo is just a cosmetic policy aimed at the construction of an image of Kazakhstan that is close to the Western agenda.”

Nazarbayev, Anceschi added, was warning Astana policymakers to keep the focus on the current economic course. “It’s a clear message that diversification efforts will slow down, with the hope that [the long-delayed, super-giant oil field] Kashagan will come in to solve all problems,” he said.

Koshumbayev agrees Nazarbayev is backtracking. “Unfortunately,” he said, “for the development of renewable energy, more is needed than just Strategy 2050 and the officials who promote it, and Nazarbayev knows this.”

In policy circles in Astana and Almaty, “alternative” energy refers broadly to non-hydrocarbon resources, including, for example, nuclear. Nazarbayev does appear to believe in the power of the atom. During the meeting with Putin in Atyrau, he inked terms for Russia and Kazakhstan to construct a nuclear power plant. According to the plan, construction will start in 2018, although it is still unclear if the plant will be built near the old Soviet nuclear hub of Semipalatinsk, in the northeast, or in the industrial west, near the Caspian shore.

Even if Kazakhstan shifts away from green energy, some progress is likely to continue. Two wind farms, one in the north and one in the south, received a financial green light in the past months. In the Zhambyl Region, the local government, with some private Lithuanian financing, has agreed to build a 250MW wind farm for $550 million. And in the Akmola Region, near the capital, the European Bank for Reconstruction and Development has agreed to fund a 50MW, $120 million wind farm.

But for one opposition leader, Nazarbayev’s comments prove these projects are mainly for show.

“Our regime has a feudal mentality. Showing off wealth is a fundamental indication of one’s status,” said Pyotr Svoik, a former deputy natural resources minister turned opposition activist. “That’s how we get an Expo branded ‘energy of the future’ while producing only marginal amounts of renewable energy.”

Paolo Sorbello is a freelance reporter who specializes in Central Asian affairs.