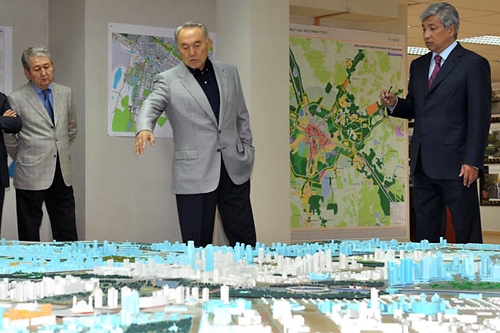 A health scare involving President Nursultan Nazarbayev is forcing Kazakhstan’s political class to confront a vexing question: what does the post-Nazarbayev future look like?

The septuagenarian president returned to work on July 21 looking hale and hearty amid conjecture sparked by a German newspaper report that he had been hospitalized at a Hamburg clinic. That report was followed by a claim from his estranged former son-in-law, Rakhat Aliyev, that the president is battling prostate cancer.

Nazarbayev’s office initially explained that the president was on vacation. But on July 25 presidential advisor Yermukhamet Yertysbayev – repeating previous leaks to journalists from an “informed source” – said that Nazarbayev had merely undergone a regular biannual check-up in Germany.

Nazarbayev, Yertysbayev added, is “full of strength and energy,” and intends to see out his presidential term to 2016.

Nevertheless, the succession question poses an increasing quandary as Nazarbayev – who has been in power for two decades and turned 71 this month – grows older.

“This has been the main political risk in Kazakhstan for some time now, and is likely to remain so as long as uncertainty prevails,” Anna Walker, a Central Asia analyst at the London-based Control Risks consultancy, told EurasiaNet.org. “The risk is not so much in the succession itself – Nazarbayev’s successor, whoever that may be, is likely to pursue broadly the same policies – but in the uncertainty surrounding the process and the candidates.”

Remarks by Yertysbayev in Russia’s Kommersant newspaper on July 25 have helped stoke speculation about the country’s political future. He identified Nazarbayev’s son-in-law Timur Kulibayev as a possible successor, describing him as someone who would be “able to continue the president’s strategic course.”

These recent developments highlight “both the imminency and inevitability of succession,” said Mallinson, casting a spotlight on a developing power struggle in Kazakhstan.

“For the last 20 years, authoritarian political management and a vertical power structure have concealed chronic elite factionalism. But these intra-elite tensions are evidently increasing as the various power groups and individuals jostle for power in what appears to be the prelude period to regime change in Kazakhstan,” she said.

Although Yertysbayev – who is nicknamed the “president’s nightingale” since he is believed to voice Nazarbayev’s views – spoke hypothetically, his Kommersant comments prompted a minor outburst from Kulibayev, who is married to Nazarbayev’s daughter Dinara Kulibayeva. Some experts believe Yertysbayev’s singling out of Kulibayev could arouse the ire of other presidential aspirants, causing them to gang up on the president’s son-in-law. Calling the presidential advisor’s remarks “unexpected” and “improper,” Kulibayev downplayed the notion that he wants to be president someday.

“I have never positioned myself as a politician,” Kulibayev – a billionaire businessman who heads Kazakhstan’s Samruk-Kazyna fund, which controls all state-owned assets – said in remarks quoted by the KazTAG agency. “As you know, for a long time I have dealt with economic questions and I like this.”

There has been speculation that Kulibayev may use the Ak Zhol party as a vehicle to advance his political career. His associate, Azat Peruashev, recently assumed the party’s top leadership post. And some experts now believe Ak Zhol is likely to win seats in the next parliament. The legislative vote is scheduled to be held in 2012, although rumors are circulating in Astana and Almaty that snap elections could take place this fall.

Kulibayev’s economic muscle already gives him political influence, Mallinson said: “Kulibayev has hitherto emphasized his disinterest in politics and has been primarily regarded as a businessman, not a politician. But in this jurisdiction where the nexus between business and politics is very tight, he is likely to have been party to major political and economic decisions over the last decade.”

For the moment, it seems pragmatic for Kulibayev to deflect attention away from himself. The succession stakes are high, and in the backbiting world of Kazakh politics, a high-profile public endorsement gives his foes an incentive to scheme against him, a commentary published July 25 in the Respublika newspaper suggested.

The field may be crowded, but Kulibayev is the clear front-runner, Mallinson believes. “There is no single candidate that will satisfy all the elites but Kulibayev has more allies and less enemies than other potential successors and his accession to the presidency would undoubtedly have the most benign effect on the economy, thereby reassuring restive international markets and investors,” Mallinson said.

Stability is also crucial for domestic political and economic players. Last year Kazakhstan passed a law designed to smooth the succession process, granting Nazarbayev the title Leader of the Nation with a lifelong say in policymaking that paves the way for him to step down – if he chooses to.

“I believe it all depends on his health,” Walker said. “If he did indeed go to Germany just for a routine check-up, then it’s unlikely that he’s considering stepping down now – even taking into account the fact that as Leader of the Nation, he would still have considerable political influence, he is likely to want to remain president for as long as he is physically able.”

“If, however, he is in ill health, then the prospect of him stepping aside must be more likely,” Walker continued. “But first he would have to ensure that his chosen candidate was sure to be installed in power.”

That may be easier said than done. As Mallinson pointed out, ensuring a smooth political succession in “a country where power is concentrated in the hands of one individual is a labyrinthine task.”