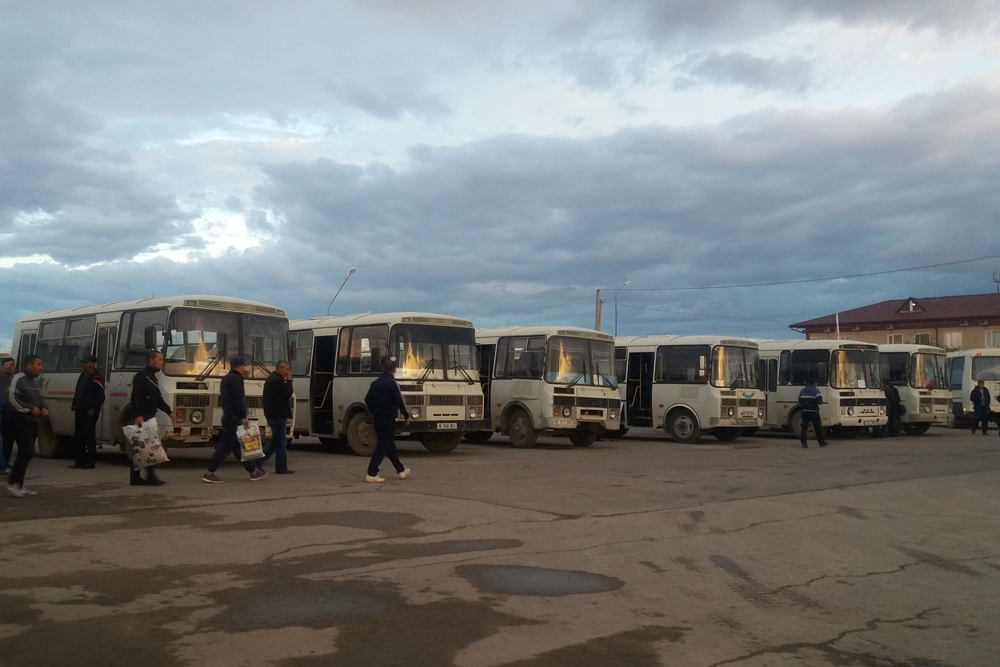 Employees of Burgylau, a privately-owned well-drilling company, mustering for their morning shifts on September 27, three days before some 2,300 workers at the company downed tools in a protest over salaries and their right to have their interests represented by the union leader of their choice. (Photo: Joanna Lillis)

Disgruntled oil workers crowded into an apartment inside one of the prefabricated blocks that line the streets of Zhanaozen, a town at the heart of Kazakhstan’s oil country. The grievances they shouted over one another sounded familiar. Some griped about pay, others complained that their right to operate an independent trade union representation was being infringed.

Five years ago, beefs over pay, labor rights and union activity sparked a protracted strike in Zhanaozen’s oil sector that climaxed with the deaths of 16 civilians in clashes with police.

“History is repeating itself,” sighed Sagintay, an oil worker speaking under a pseudonym, as his colleagues nodded vigorously in agreement. “In 2011, there was a strike five years ago. This is exactly the same.”

While there are parallels between the 2011 dispute and the strike that erupted last week in Zhanaozen, there are also crucial differences. Five years ago, the strike rapidly fanned out across several state-owned oil firms, placing the government at the center of the dispute. For now, at least, this strike is confined to a single, privately-owned well-drilling company. In addition, economic conditions are different. The labor unrest these days is taking place against a backdrop of an economic downturn in Kazakhstan.

Sagintay and around 15 colleagues spoke to EurasiaNet.org in Zhanaozen three days before some 2,300 workers at the Burgylau company downed tools on September 30 in a protest over salaries and their right to have their interests represented by the union leader of their choice.

The man they want to push their case is Sadaukas Bekkaliyev, a charismatic, wise-cracking 45-year-old driller who headed the labor union from 2009 to 2012 and was elected union leader again this summer – but has since been fired by the company and effectively ousted from the union.

“We’re trying in every way to resolve this by legal means, through talks, through social partnership, around the table, through negotiation,” Bekkaliyev told EurasiaNet.org. “But for now the fact that the employer is ignoring the workers or the worker’s representative – me, that is – will in our opinion lead to no good.”

He listed the strikers’ two main demands: a change to the salary calculation system that they believe would result in substantial pay raises, and assurances that “our constitutional rights will be defended, that public organizations and trade unions will be able to work and that no one will hinder them.”

The workers present clearly looked up to Bekkaliyev, whom they call by the affectionate nickname “Saken” — “he defends our rights, that’s why we like him,” said Sagintay — even after he was fired by Burgylau, not once but twice.

He was first dismissed in May for absenteeism, then reinstated, then fired again in September after being convicted of theft of company property. He asserts the theft claims are “set-up.” That dismissal came days after Bekkaliyev was elected trade union leader. Management challenges the validity of the vote.

“They have the right to elect a new leader, but the employer is interfering in that right,” complained a Bekkaliyev supporter and employee of the union, whose work, members said, was paralyzed because of the dispute, its offices sealed and its accounts frozen.

An official at Burgylau who declined to be identified confirmed to EurasiaNet.org by telephone on October 3 that virtually all the 2,300 staff were out on strike, picketing company premises on the outskirts of Zhanaozen, where workers muster to get buses out to the oilfields, but she could not comment further. On October 4, Burgylau referred queries to its director, Dyusenbay Taushanov, who did not return calls to his cellphone.

Askar (a pseudonym), a driller, confirmed to EurasiaNet.org by telephone on October 4 that the strike was continuing into its fifth day. “Yesterday, we held talks with the management and they didn’t resolve the matter,” he said. Some workers are threatening a hunger strike.

This is the second strike at Burgylau within two months. In late July, workers downed tools in protest at their hours, and their salaries by extension, being slashed by half, in response to a downturn in Kazakhstan’s energy sector caused by low global oil prices.

Company executives explain there simply was not enough work because of the oil-sector slump, but they backtracked after workers went on strike, reinstating their hours at full pay.

Some strikers are now demanding back pay for the two months they worked half-time, but the main salary demand is that the pay calculation system be brought in line with that used by the national state-owned energy firm KazMunayGaz.

Workers at Burgylau believe employees of OzenMunayGaz, a KazMunayGaz subsidiary and the main employer in Zhanaozen, receive higher salaries than they do, although several workers from both companies queried by EurasiaNet.org cited similar ballpark figures for their current salaries, of around 300,000 tenge ($900) per month, which is double the national average salary of 142,000 tenge.

The dispute highlights an uncomfortable fact – one that workers seem reluctant to accept: the country’s oil companies are experiencing tough times because of the worldwide price crash. Given the drastic decrease in business, the company has much less flexibility on the issue of pay than it might have a few years ago, when energy prices were still high.

Last year, drilling for new wells – Burgylau’s prime business – dropped by 40 percent and it will fall another 50 percent this year, Aset Magauov, the deputy energy minister, said in July.

As Astana struggles to address the economic slump, it is eager to prevent the industrial unrest from spreading.

So far, there is no sign of other oil workers in Zhanaozen downing tools in solidarity with the Burgylau drillers. “We haven’t taken any interest in what’s happening there,” one OzenMunayGaz employee said. “We don’t need another strike. What we need is peace and quiet and stable salaries.”