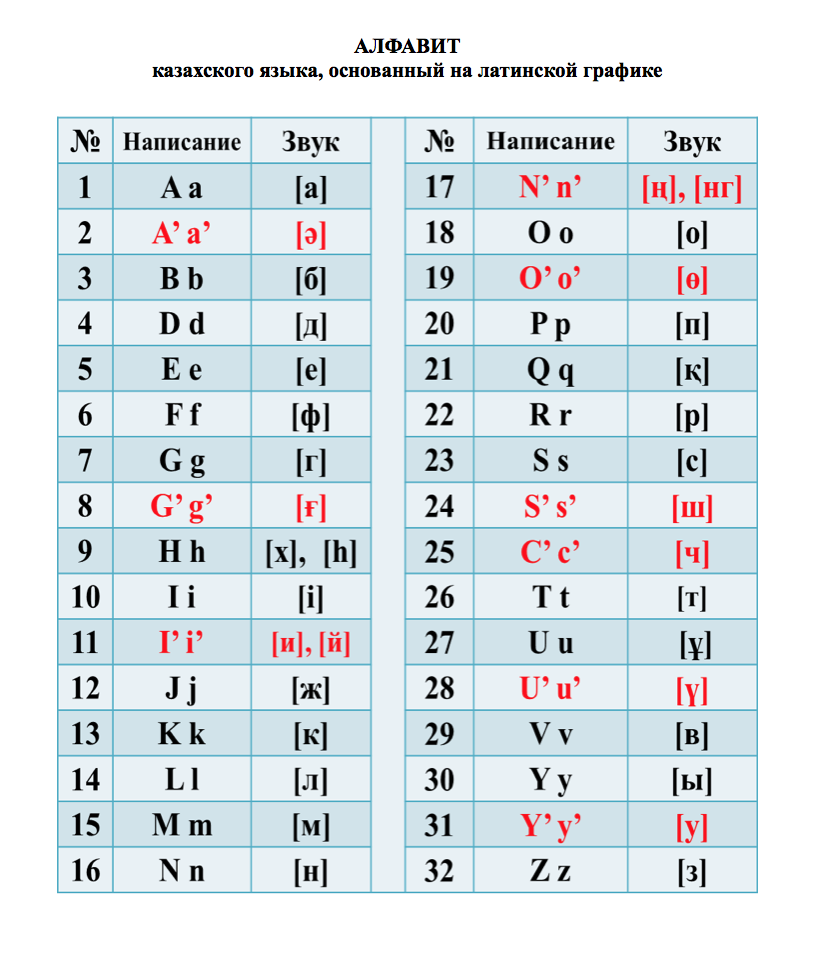 A table showing the new Kazakh alphabet, as published on the presidential website. (Photo: Screenshot of Akorda presidential administration website)

A local newspaper in northern Kazakhstan has become the first publication to run an edition in the new-look, apostrophe-heavy Latin alphabet.

Dinara Karymsakova, a resident of the Kostanay region, displayed a hard copy of Arqalyq Habary on her Facebook page. In the edition, the newspaper published the new and old alphabets on its front page and urged readers to offer their views on what they think about the script.

One person commenting under Karymsakova’s post might have been speaking for many others when she said, simply, “It is very difficult to read.”

Kazakhstan’s Latin alphabet has been pushed through with a typical lack of public consultation. In early September, lawmakers began considering a preliminary proposal that consisted of 25 characters — a major departure from the 42 Cyrillic alphabet now in use. Then after a few weeks of chatter and mixed verdicts, President Nursultan Nazarbayev on October 27 suddenly signed off on a significantly revised 32-character version without waiting around for the public to offer its judgement. The government is now tasked with phasing in the alphabet in by 2025.

The alphabet published in September achieved its streamlined effect by having certain sounds currently conveyed by free-standing Cyrllic characters represented with two-letter combinations. So “Ng” instead of “Ң,” “Oe” rather than “Ө” and “Zh” for “Ж.” Authorities have now decided the effect will be better achieved by sprinkling texts with a dizzying proliferation of apostrophes.

A website that automatically generates Latin alphabet transliterations of people’s names has provided ample ammunition for detractors. The president dodged a bullet and will be simply Nursultan Nazarbaev (so intact is his name that there are conspiracy theories circulating that officials rigged the transliteration of the letter ұ — as in Нұрсұлтан — to ensure the leader’s monicker remained elegant-looking). Spare a thought, however, for his youngest daughter, Aliya Nazarbayeva, who will henceforth go by A'li'i'a Nazarbaeva.

Not that the new version is without its supporters. But civic activist Yermurat Bapi told RFE/RL’s Kazakh service, Radio Azattyk, that he believes the enthusiasm is primarily being fanned by government workers and that the promotion campaign is flaccid and too similar to bog-standard state propaganda to be effective. Some government departments have already changed their signs to reflect the new alphabet.

Another precedent has been set by officials in the Gabit Musirepov district of the North Kazakhstan region, who say they have become the first local authority to begin issuing letters to residents with the new script.

Political analyst Aidos Sarym told Radio Azattyk that he was confident that the apostrophe alphabet will undergo further modifications, so that it was foolish for government bodies to scramble in adopting the latest form.

“Latin script has not yet gone into use. This is putting the cart before the horse,” he said.