Pollution fell along with traffic during quarantine, but airborne levels of several toxic chemicals rose far above WHO limits. 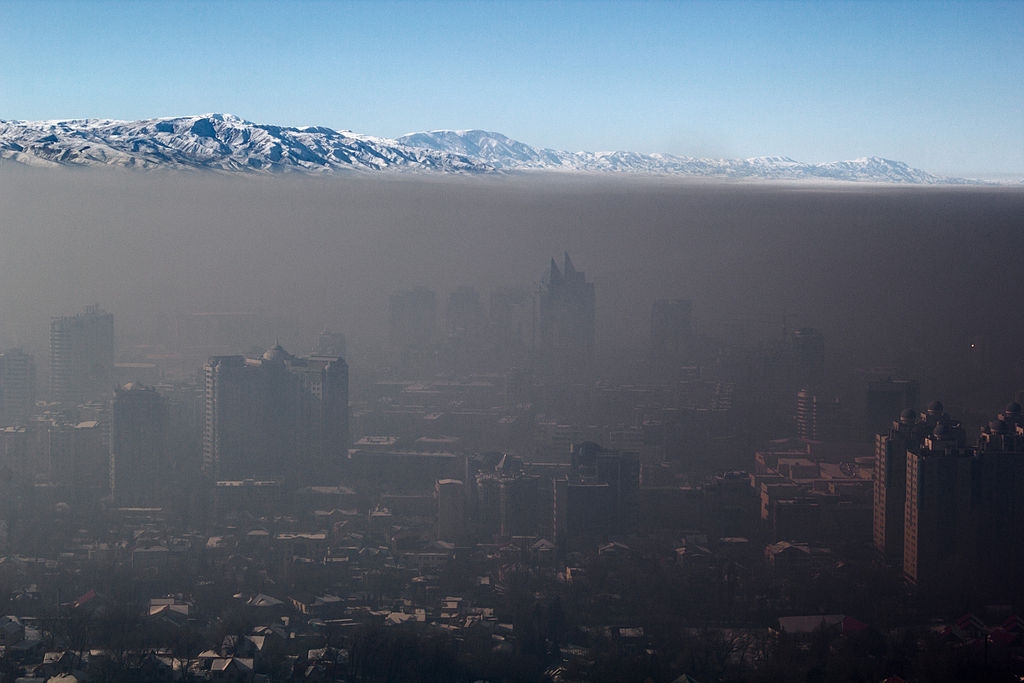 Pollution in Almaty in 2014 (Wikimedia)

Residents of Central Asia’s biggest cities took to social media during the coronavirus lockdown to celebrate cleaner air. In Almaty and Bishkek, without cars fouling up the atmosphere, one could even enjoy unusual mountain views.

But clearer doesn’t mean clean, say the authors of a new paper examining air pollution during the height of Kazakhstan’s March-April quarantine. Their findings challenge a government claim that cars are the primary source of pollution.

The pandemic-induced lockdown in Almaty allowed the team of scientists led by Aiymgul Kerimray of Al-Farabi Kazakh National University to assess the changes in air quality between March 19 and April 14. They published their findings in Science of the Total Environment, a leading peer-reviewed journal on environmental science.

In the 27-day period, concentrations of PM 2.5 matter – tiny particles produced by vehicle exhaust, power plants, and industrial emissions that can make their way into the lungs and contribute to asthma, chronic bronchitis and increase the risk of lung cancer – fell by an average of 21 percent compared to the average of the same period over the previous two years. Nevertheless, PM 2.5 levels still exceeded the World Health Organization’s daily allowed limits on 18 out of the 27 days assessed.

More worrying, concentrations of benzene and toluene – two industrial chemicals that the American Cancer Association regards as probable carcinogens – were two to three times higher than averages recorded over the same period between 2015 and 2019.

Back in 2016, the Almaty city government blamed vehicle traffic for the city’s high levels of pollution, a claim undermined by this new research. “Since there was no traffic activity during the lockdown, the higher levels of benzene and toluene may indicate that their origins are predominantly non-traffic sources,” the paper reports.

Coal-fired combined heat and power plants account for around 75 percent of Kazakhstan’s total power generation. According to the study, the two plants in Almaty burn an annual combined total of more than 3 million tons of low-grade coal, which exceed European limits on PM 2.5 tenfold.

“There are longstanding debates about what contributes to Almaty’s air pollution,” corresponding author Nassiba Baimatova, head of the Ecology of Biosphere Laboratory at Al-Farabi, told Eurasianet. “Official statements claim it is vehicles, while the scientific research we do at our lab shows that CHP-2 and CHP-3 [Almaty's two coal-fired heating and electricity plants] are significant contributors. Quarantine became this unique opportunity to look at the correlation of vehicles with air pollution.”

Baimatova said her colleague got the idea for the Almaty study from similar research done during the earlier lockdown in Spain.

“The more data we gather the more scientists can analyze it,” Pavel Plotitsyn, one of the study’s eight coauthors, told Eurasianet. In 2017 he started Airkaz with 14 sensors throughout the city. “The data is out there in the international scientific community, making it impossible for government officials to ignore it.”

Baimatova hopes their work will lead to a unified system for monitoring the air.

On June 1 Kazhydromet, the state meteorological agency, began monitoring levels of a highly carcinogenic chemical, benzopyrene, in Almaty for the first time. Plotitsyn and Baimatova say that is a step in the right direction, although the data will be collected weekly instead of daily.