Kazakhstan: Notes from a protest

A politics reporter in Almaty describes the night the government lost control. 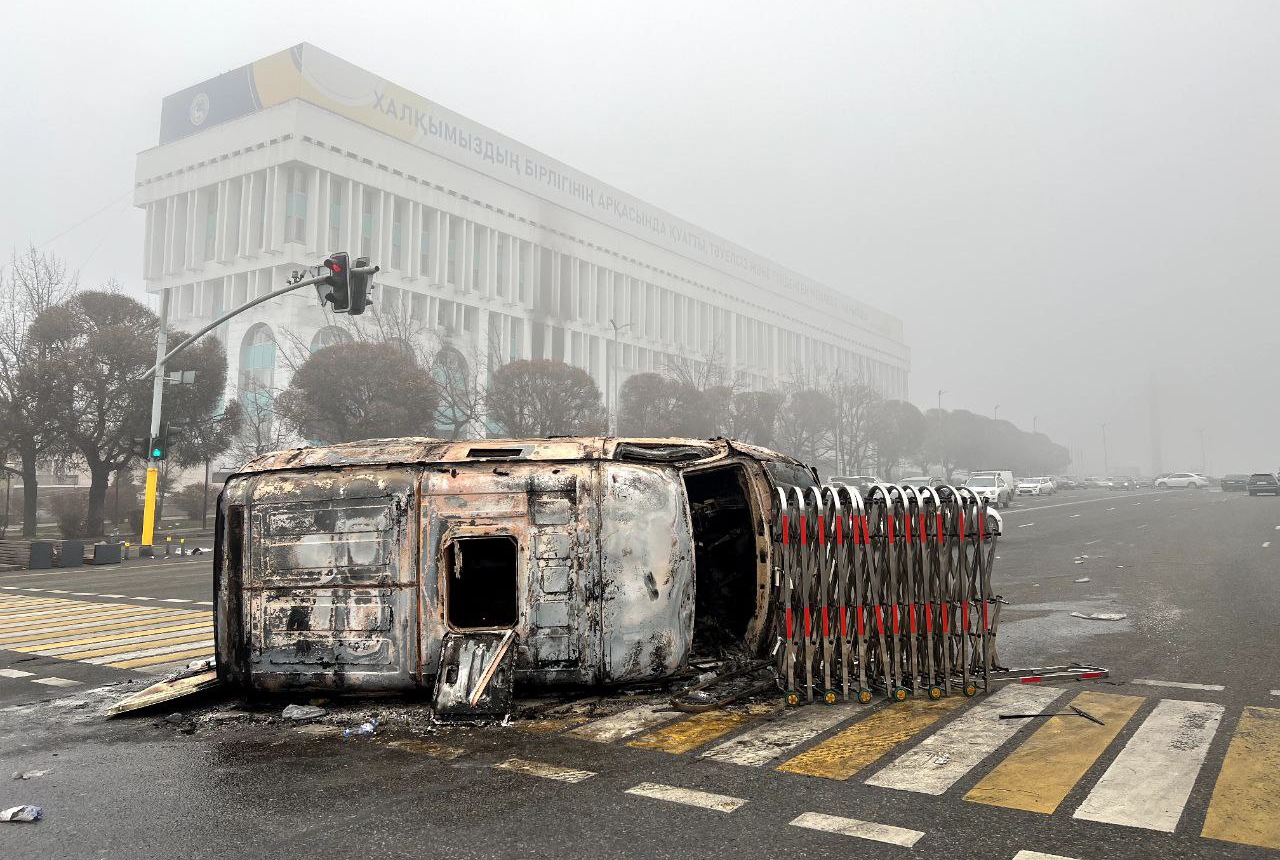 As I write these words, my friends have informed me that the city hall in Almaty, the largest city in Kazakhstan, has been seized by protesters. And there’s talk they want to seize a police precinct and the airport too.

Why am I not there? Because on the night of January 4, it wasn’t just the tear gas that got me. I fell into an aryk, one of the shallow canals crisscrossing the city’s streets. It happened when a car – a police car, a regular civilian vehicle, I’m not certain, I was looking the other way at the time – barreled through the group of demonstrators that I was following. People in the crowd pushed me out of the way to safety and into the aryk. As I tumbled down, my knee smashed against the concrete. The furthest I can walk to now is my balcony.

They say smoking is bad for your health, but it’s hard to resist the urge when you’ve experienced watching your colleagues and fellow citizens gasp and vomit from tear gas.

How did it all start? I headed into town around half past nine in the evening on January 4. My first stop was to drop by a police precinct. I wanted to find out what was happening to the people who had been detained while attending a picket next to the First President’s Park earlier in the day. That first president, by the way, is Nursultan Nazarbayev, the very same person whom protesters were demanding leave the country’s political scene. (He hasn’t been president since 2019, but most people believe he still runs the show).

There were a group of activists from Oyan, Qazaqstan, a youth-led movement of liberals, outside the police station. They were there demanding their friends be released. I found out later that he was indeed let go, but by that point I had headed to another location on the outskirts where protesters had started to gather. There must have more than 5,000 people. In a country like ours, that’s like a little army. But this army had no weapons. They had a long way to go from the outskirts to the city center. And along the entire way, I did not see them display any aggression or commit any violent acts. There were reports the next day about burnt-out cars, but I never saw anything like that, so I have nothing to say about that.

“Shal ket!” they chanted. That means “old man go!” in Kazakh. The old man is, of course, Nazarbayev, who turned 81 in July. They also cried “Oyan Qazaq!” (Kazakh wake up) and “Forward Kazakhstan!”

What was really striking was how there were no police anywhere. It was clear that they were poised in expectation on Republic Square, where the city hall stands and is the spot protesters always try to reach. I’ve been covering politics in Kazakhstan for a while now, and I had imagined that the police would make quick work of the crowd. Turns out that wasn’t quite the case.

Another interesting point is that the crowd had no obvious leader. There was no familiar opposition politician among them – not Mukhtar Ablyazov, Nazarbayev’s sworn France-based enemy, not anybody else either. It was a communal effort. It was a mixed crowed too, all kinds of people there, mostly residents from the outskirts.

When the demonstrators approached the square, police began throwing stun grenades and tear gas. Me and thousands of others choked, our eyes and faces stung, we felt sick, we coughed ceaselessly. It’s a miracle I didn’t pass out. They must have fired off more than a hundred stun grenades between 11 p.m. and 4 a.m., which was when my colleagues had to get me home. I could still hear the bangs from my apartment.

About an hour after the crowd reached Republic Square, they headed down to Abai Street. There they faced down an armored personnel carrier coming in their direction. A truck drove past carrying citizens waving Kazakh flags. Some of them were holding shields they appeared to have snatched off riot police.

Back on the square, there was this one old lady, Dariga-apai, who told us she wasn’t afraid of the gas or even death.

“Please be careful,” I told her.

There was a routine with the protestors: they retreated from the tear gas off the square, and then they tried to charge back in. And the recurring words and phrases.

“We’ll stay until the end!”

“We’ll stay until the morning, even later!”

But they couldn’t hold the square. The crowd made its way up Timiryazeva Street, toward the mountains, past a shopping center. At one point they found themselves backed into a corner. Some ripped saplings out of the grass with which to battle their way out. Riot police were set back on their heel and banged on their shields as they retreated.

The protestors managed to get back out onto Timiryazeva Street. Some tried to return to the square, others gave up. Nobody had gas masks. Ultimately, they got squeezed downhill to the corner of Abai and Baitursunova. There the people clustered and held their ground. It was around that time that my leg started to feel like it was going fall off and that I was about to cough up a lung, so they stuck me in a car and sent me on my way.

As I write these words, we have no internet in the city. I don’t know who is running the country. But I do know there has been a lot of violence. And it looks like there will be more.