City authorities said they hoped the feast would cheer up frontline medical workers. 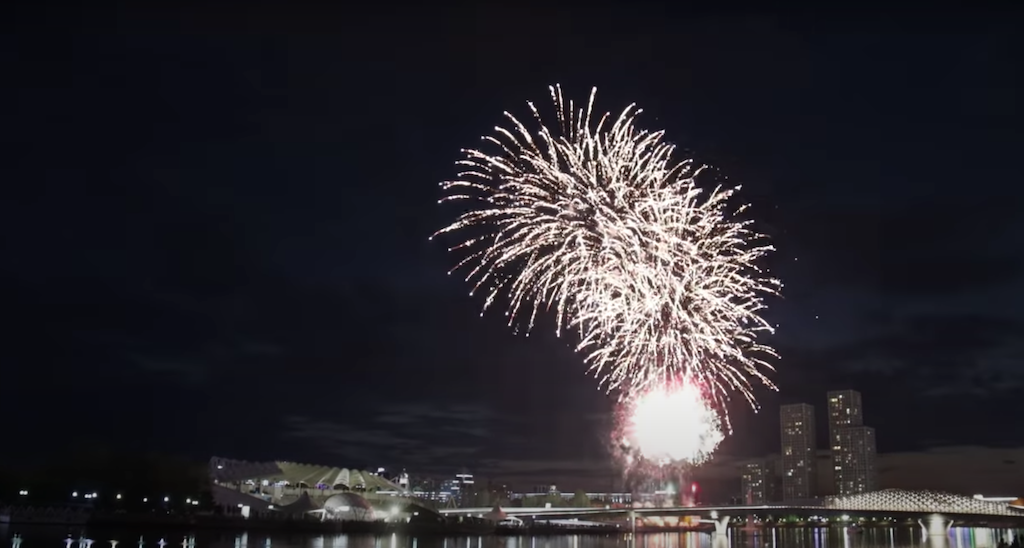 A Feast in Time of Plague: A coronavirus-stricken Nur-Sultan was lit up by fireworks on July 6.

As Kazakhstan’s coronavirus crisis appears to grow only more alarming by the day, this hardly felt like the time to celebrate.

Officials in the capital, Nur-Sultan, which was last year renamed in honor of former President Nursultan Nazarbayev, apparently felt otherwise. And so, they pressed ahead with a giant, raucous fireworks display on July 6. The stunt has provoked rare levels of indignation, including from some improbable quarters.

Annual July 6 festivities are formally held to commemorate the decision, adopted in the 1990s, to make Nur-Sultan, formerly Astana, the country’s capital city. The holiday, however, also semi-officially marks the birthday of Nazarbayev, who turned 80 this year after recovering from a purported bout of coronavirus.

In order that people all over the country could watch the pyrotechnic show, state television channel Khabar-24 carried a live broadcast. In doing so, they sorely misjudged the mood of a public growing increasingly irate at reports of packed hospitals, medicine shortages and escalating numbers of new infections, not to speak of concomitant problems like growing joblessness and the inconvenience of the new lockdown round imposed over the weekend.

“A firework show at a time when people are in mourning, experiencing grief – this is, above all else, a mockery. The mood of one person is more important than the sorrow of an entire population,” wrote Almaty-based Facebook user Kairat Zholdybayuly, in an apparent allusion to Nazarbayev.

“Out of the window, I can hear and see unending fireworks,” wrote Bakhyt Syzdykova, an activist and former member of parliament. “It has been going on for 10 minutes. And my heart aches when I think of how wrong this is in light of the current situation. […] They are dancing on people’s bones.”

Some wondered how much had been spent on the entertainment.

“How many ventilators just flew off into the air and disappeared right there?” asked Twitter user @Aibellenok.

Nur-Sultan city hall tried to defend itself from criticism by noting that festivities had been planned since the beginning of the year and that the purchase of fireworks had been paid for by private sponsors.

“The firework show was intended to raise the mood of citizens and to support medical workers at the forefront in the fight against coronavirus," the city hall’s culture department said in a statement on its Instagram account.

But even Dimash Kudaibergen, a pop heartthrob who has usually dispensed with his indifference to politics only to support the government, appeared disgusted.

“What were these fireworks supposed to honor??? The fact that we are in first place in coronavirus infections? People cannot find oxygen tanks, and in Astana they are setting off fireworks! Carry on like this, and there will be nobody left to celebrate next year,” he wrote on his Instagram account, which is followed by 3 million people.

Kudaibergen was overstating his case, but not by much. A regularly updated New York Times graphic based on research by the Johns Hopkins University shows Kazakhstan as the site of one of the world’s currently fastest-escalating coronavirus outbreaks.

The situation has worsened vertiginously since the government lifted its state of emergency on May 11. That decision led to large numbers of people reverting to gathering en masse in public places, which seems to have had a disastrous impact on the epidemiological landscape. Where there was a total of 5,100 confirmed cases when the state of emergency was lifted, that number has now risen to almost 50,000. Of that total, around 16,300 are said to have recovered.

The reversal of fortunes has prompted the government to resort to reinstituting lockdown measures, although restrictions are lighter than those that had been imposed in March.

Overfull hospitals are reportedly having to routinely resort to turning away non-critical cases. Many are unable to get through to emergency services.

People having to self-medicate are struggling to get their hands on drugs as pharmacies run short on antiviral and fever-calming medications. To make matters worse, people crowd day and night outside pharmacies, rarely maintaining social distancing, as advised by health officials.

Tengri News website reported on July 7 how long lines are forming at a morgue in Almaty as people wait for hours to take receipt of relatives who have succumbed to coronavirus-related conditions.

“There are very few employees inside. They are not managing to keep up with handing over [bodies], processing all the paperwork. There is a massive shortage of staff. And there are many dead,” one relative waiting outside the morgue told Tengri.

As of July 7, authorities had reported 267 deaths with COVID-19, but these figures are widely dismissed as massive undercounts. Many fatalities are being ascribed to correlated conditions, like pneumonia. Achieving any kind of certainty is further hampered by an incomplete and faltering testing regime.

Anger over the Nur-Sultan fireworks has played out against this backdrop.

Sergey Duvanov, a freelance journalist and human rights activist, cited the example of Britain’s Queen Elizabeth II refraining from having her official birthday celebrated with the usual pomp as the path not taken.