The plan is to turn waters from the Caspian Sea into clean hydrogen for export. 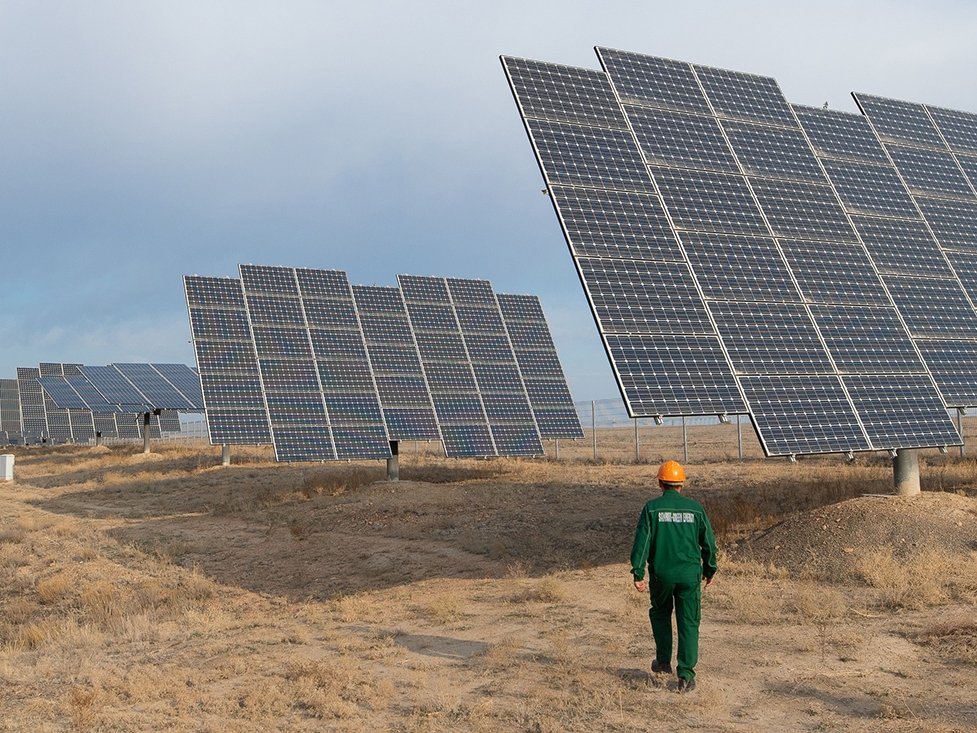 The project will use solar and wind power to produce hydrogen. (Samruk Energy)

Best known as an oil and gas hub, western Kazakhstan hopes to become a leading global exporter of clean energy.

Hyrasia One will use electricity generated by solar panels and wind turbines to separate hydrogen gas from water. It aims to start production by 2030 and produce 2 million tons annually from 2032.

That is equivalent to one-fifth of the EU’s 2030 target for green hydrogen imports – although there would be logistical challenges transporting the gas from Kazakhstan to Europe.

The meteorological conditions and skills base in western Kazakhstan are ideal for the project, said Wolfgang Kropp, chief executive of Svevind Energy Group, which is behind Europe’s largest onshore windfarm, in Sweden, and operates in Germany.

“Kazakhstan’s Mangystau region offers very favorable natural resources. The wind conditions are very stable and strong, comparable to near-coast offshore wind-parks, the solar radiation is as strong as in southern Europe and the wide steppe regions are widely unused and sparsely populated,” he told Eurasianet in emailed remarks.

“Because of the experience as an oil and gas exporting country, there is a lot of know-how in Kazakhstan that will help to realize Hyrasia One.”

The project will use wind and photovoltaic plants with a capacity of some
40 gigawatts to generate renewable energy of approximately 120 terawatt-hours annually, Hyrasia One, a Svevind subsidiary company, explained in a statement.

This energy will supply an industrial park with a capacity of 20 gigawatts located near the port of Kuryk on Mangystau’s Caspian Sea coast, which will produce hydrogen via water electrolysis. Hydrogen, when burned, emits only water vapor.

The project can “supply hydrogen on an industrial scale,” the firm specified. Hyrasia One could become “a supporting pillar for the hydrogen markets currently emerging in Europe, as well as in Kazakhstan itself and in Asian countries.”

No decision has been made on export destinations and routes, the firm told Eurasianet in response to emailed queries.

Transport by pipeline is most cost-effective, but existing gas pipelines would have to be repurposed or the hydrogen mixed into the natural gas. Transport by rail or ship is already feasible.

The EU is an eager market for green hydrogen as it weans itself off Russian gas, but Kazakhstan’s main export route to Europe, via Russia, is currently closed because of the war in Ukraine. However, alternative routes are being developed through the South Caucasus and the situation may be different by the time the project comes onstream.

The shrinking Caspian Sea will be the water source for hydrogen production. Hyrasia One was unable to specify how much water it would need, but would keep “water withdrawal as low as possible” because the sea “must be used sustainably to protect the environment.”

The plant will create 3,500 jobs during construction and 1,800 permanent jobs, the president’s office said. That will be welcome in a region which is a hotbed of socioeconomic disaffection despite its oil wealth.

The company will provide initial financing and is seeking long-term investors to build the project at a cost of $40-50 billion.

The investment agreement defines economic and legal points on land and infrastructure access and unhindered movement of goods and capital, and “thus gives the project, which has already been in development for three years, certainty for investors,” Hyrasia One said.