The incumbent’s absence from the debate will bear him no political cost. His five rivals will all lose soundly this weekend. 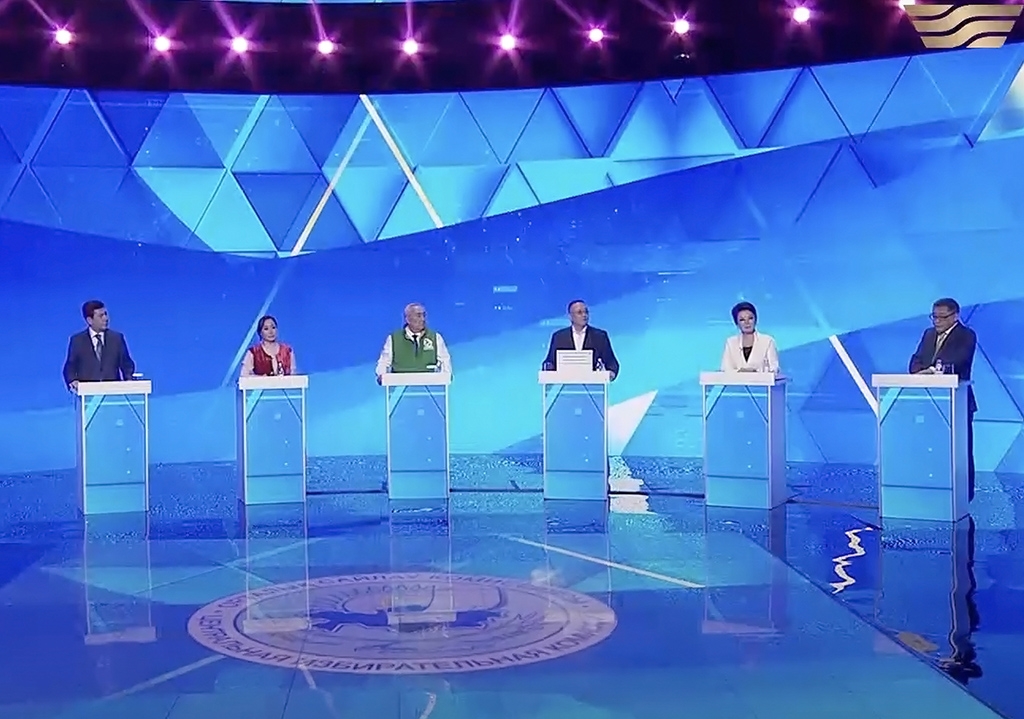 A contender in this month’s presidential election in Kazakhstan gets the nod from the debate moderator. She opens her remarks with a blistering broadside against the incumbent, President Kassym-Jomart Tokayev.

“Why are you covering up what really happened during the January events?” the candidate asks, barely containing her anger.

Tokayev hesitates. He is not used to coping with this sort of fiery challenge. As he begins to stutter an explanation, the other candidates join in the verbal assault. He is at a loss.

The audience is startled. Bringing up that sensitive topic – of the time when dozens were killed in unrest triggered by anti-government demonstrations in the first few days of this year – in such a confrontational manner, and directly to the president’s face, is not something that happens.

And, in fact, it didn’t happen this time either.

There was a televised presidential debate on the evening of November 11 — that part is true. The program lasted 100 minutes. Six people took part, but Tokayev was not one of them. He was too busy attending a summit in Samarkand, so he sent a proxy: Yerlan Koshanov, the staid chairman of the lower house of parliament.

Tokayev’s absence was of no significance and will bear no political cost. His five rivals will all lose soundly in the November 20 contest.

The overtly theatrical spectacle of the debate, which was aired on state television station Khabar, appears to have been dispiriting even for a jaded electorate hardened to ersatz exercises in democracy.

“Who are these people they’ve foisted on us?” Aidana Tokhtasynova, an account manager at an Almaty investment company, told Eurasianet, referring to the also-rans. “I didn’t see a single person other than Tokayev at these debates to whom any person in their right mind would want to give their vote.”

Tokhtasynova said she will not bother casting her ballot at all.

It wasn’t supposed to be this way. After changes to the constitution were approved in a referendum in June, Tokayev pledged that Kazakhstan was heading into an era of radical change. There would be a root-and-branch democratic transformation, he said, and an ongoing campaign of reforms would ensure that the old, authoritarian system would wither away.

The unspoken implication of such remarks is that the New Kazakhstan – as Tokayev’s team has branded it – will be different from the one ruled by former President Nursultan Nazarbayev, who stepped down in 2019, but continued to wield a strong influence from behind the scenes until very recently. Nazarbayev was Tokayev’s patron and was the one that slotted him into office. Since the January protests, however, this closeness has become a liability, so Tokayev is scrambling to put clear blue water between himself and his mentor, thereby earning some political legitimacy of his own.

The television debate was straight out of the Nazarbayev regime playbook, however.

All of Tokayev’s five rival candidates are no-names. A very substantial section of the public had likely never seen their faces or heard their names before the debate. Each one of them seemed handpicked to reflect a specific demographic, as if to lend an overall impression of balance and representation. For good measure, some of the candidates bear a perennial air of comic haplessness.

There is no better example of that than 68-year-old Zhiguli Dayrabayev, a member of the Auyl (Village) party, which narrowly failed to get into parliament in the January 2021 legislative elections. As soon as Dayrabayev announced his candidacy around early October, memes playing on the fact that the candidate shares his first name with a much-mocked automobile from Soviet times sprung up on the internet. One showed a Zhiguli being crushed by a dump truck with Kassym-Jomart, the president’s first name, written on it.

Auyl moaned that online jokesters were exposing their “low level of sophistication.” Dayrabayev hardly helped his own cause by sharing a video of himself engaging in “rural kung fu,” breaking an animal bone with a chop of the hand at his dinner table in a difficult-to-explain scene.

He traded heavily on his ostensible appeal to the rural voter in the debate.

“The village is the blood and soul of Kazakhs. But the current [socio-economic] state of villages leaves much to be desired, so I will increase their importance,” he said, reading from a prepared speech that he attempted to enliven with occasional tones of indignation.

Another candidate, Karakat Abden, 48, a representative of the National Alliance of Professional Social Workers, vowed to be on the lookout for families, and children in particular.

“I will provide schoolchildren with free hot lunches, create conditions for the talents of students to be realized, and expand the network of free after-school clubs,” Abden said, delivering the main points of her platform within the three minutes allocated for that purpose.

Abden has positioned herself to appeal to a conservative-nationalist crowd. She came to the debate wearing a traditional red waistcoat and ethnic-style earrings. Her public profile to date mostly rests on her book “You Are Kazakh, Be Proud: 160 Life-Hacks for Young Girls,” which has drawn criticism from social progressives for featuring ideas deemed to reinforce “gender stereotypes” and “patriarchal attitudes.”

Her debate performance will not have mollified those critics. When asked by a member of the public in a pre-recorded video message what she thought of inter-ethnic marriages, she replied that she would impose heavy taxes on Kazakh women who marry foreigners.

Saltanat Tursynbekova, a candidate put forward by a public association called Kazakh Mothers Stand for Traditions, used her slot to say she would fight for the observance of laws in all spheres of public life.

Tokayev’s most serious opponent is ostensibly Nurlan Auyesbayev, who has been nominated to run by the National Social Democratic Party, or OSDP – a once-partially lively but now entirely spent opposition force. Auyesbayev brought few policy proposals to the debate, but he did assay some emotion.

“We need to intensify the fight against corruption! What we will build is not oligarchic capitalism, but a people's economy! Because the goal of oligarchs is to earn a lot of money in a short time and nothing else!” Auyesbayev yelled as he waved his arms.

Auyesbayev dropped the indignant act when addressing a question to Tokayev’s proxy though. Instead of shouting, he meekly asked Koshanov what his boss, the president, was intending to do to improve life in the villages. None of the candidates gave Koshanov a hard time.

So as to lend the debate the impression of confrontation, the moderators aired a pre-recorded video question from Yermurat Bapi, editor of the independent newspaper Dat, who asked Koshanov when the agenda of political reform would finally start being implemented.

Koshanov said the fact that Bapi was able to ask the question was itself a sign of the government’s openness. He then alluded to some recently adopted changes to the constitution that he said would improve democratic representation.

Inasmuch as there were robust exchanges, they were among the no-hoper also-rans. Like the moment when Abden laid into Meyram Kazhyken, a soft-spoken academic, for being a "theoretician out of touch with the earth.”

Once the debate was over, government-aligned pundits were wheeled out on state media to express the view that the exchange constituted a vibrant battle of ideas. Independent experts were less impressed.

“All this is not real. All the candidates are playing roles in this election. There is no real fight, no real debate. I can’t bear watching this anymore,” Yelena Shvetsova, director of Erkindik Kanaty, a non-profit group that monitors elections, told Eurasianet.

What was most lamentable was that the TV debates are costing the taxpayer around 63 million tenge ($140,000) to organize, Shvetsova said.

“We are only seeing a reboot of the political system with cosmetic updates, not a reformatting,” Ismagambetov told Eurasianet. “The players change, but the rules of the game remain the same.”