Kazakhstan: One year on from Bloody January, officials stick to their story

The government narrative is vague and full of holes. 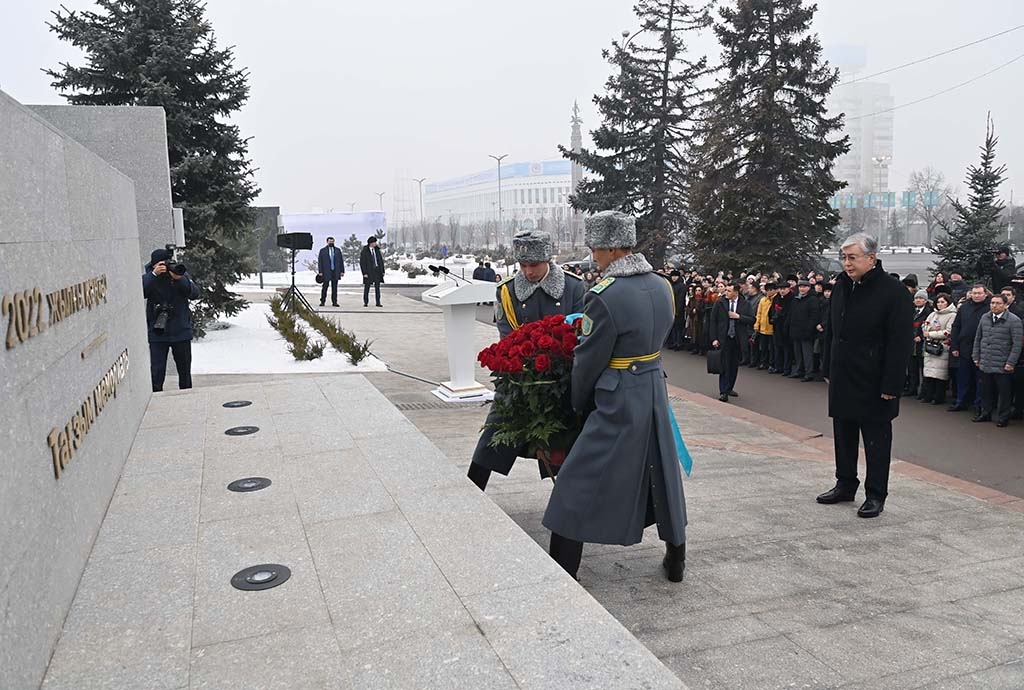 President Kassym-Jomart Tokayev opened a memorial in Almaty last month to the victims of the January violence. (government handout)

On the first anniversary of the bloody unrest that brought death and destruction to Kazakhstan’s largest city, the general prosecutor addressed lawmakers and delivered what looks like the state’s definitive verdict on what occurred. Many questions linger, however.

Berik Asylov told parliament on January 5 about what investigators have described as a coup attempt executed by organized criminal groups and plotted by a man once considered an ultra-loyalist of the ruling regime. He spoke too about the excesses of the police, dozens of whom reacted to the strife by torturing people scooped up, often arbitrarily, amid the chaos.

On the same day, President Kassym-Jomart Tokayev paid his own tribute to the 238 people killed over four days of what has come to be known in Kazakh as Qandy Qantar, or Bloody January, by saying prayers at the Khazret Sultan mosque in Astana. Last month, Tokayev unveiled a memorial in Almaty consisting of a few austere black and white steles honoring the dead.

That gesture was met with hostility among Tokayev’s critics, who recalled how the president had ordered security forces to use “lethal force” against violent demonstrators, whom he called “bandits and terrorists.”

The presentation that Asylov, the state’s leading prosecutor, gave to the lower of parliament, known as the Majilis, was in large part a reprisal of a well-rehearsed script.

Training for the January events, which the authorities typically portray in broad strokes as having been constituted almost entirely of unruly and yet coordinated riots, is said to have been carried out throughout 2021.

“I am unable to enter into the specific details of the plot. I can only say that throughout 2021, the plotters were readying in secret to adopt radical measures. Organized criminal groups were among the perpetrators. They recruited people, armed themselves, and bought walkie-talkies and transportation,” he said.

Behind the underworld gangs lay a subversive wing of the security services, the prosecutor said.

Investigators continue to cling to the need to maintain secrecy in the interests of protecting national security, so only sparse details are known.

In November, the Prosecutor General's Office referred treason charges against Karim Masimov, the former head of the National Security Committee, or KNB, and two seconds-in-command, Anuar Sadykulov and Daulet Yergozhin, to the courts. At least another three KNB officials are facing abuse of power charges.

After his address to parliament, Asylov was pressed by journalists on whether prosecutors were operating on the specific working assumption that the entire alleged coup plot had been cooked up by Masimov.

“You could say that, yes,” he responded.

While demurring when it comes to the details of the alleged attempted coup, the authorities have been more expansive in detailing the former security services chief’s purported excesses. In March, the KNB produced a slew of images of mansions, luxury Swiss watches, a huge fleet of premium cars, and suitcases stuffed with dollars said to have belonged to its ex-chief.

The secrecy of the case is enabling prosecutors to avoid having to justify what many observers find to be puzzling omissions.

Another one-time second-in-command to Masimov, Samat Abish, a nephew of the former President Nursultan Nazarbayev who was fired around 10 days after the unrest subsided, is not among those in the dock, although it is widely suspected he too may have played a role in fomenting violence. Asylov was asked about Abish, but he responded evasively.

“It is difficult to answer this question. Right now, investigations are underway,” he said, adding that Abish has until now only been questioned in the capacity of a witness.

Abish had been in his post as first deputy chairman of the KNB from 2015.

According to the state’s narrative, it was the connivance of security services leaders and the initial inaction of the armed forces that opened the way for gangster-led mobs to take the initiative by seizing on the disarray that ensued after riot police aggressively put down a peaceful demonstration late on January 5.

“Ultimately, [the cities] of Almaty and Taldykorgan fell completely under the control of armed bandits for two days. A whole arsenal fell into their hands: almost 3,000 units of [items such as] automatic rifles, pistols, sniper rifles and tens of thousands of ammunition [were stolen from abandoned KNB and police buildings],” Asylov said.

Two-thirds of those weapons were never recovered, officials say.

In a twist of irony, rights advocates who have for years campaigned on behalf of people targeted for arrest by the KNB are now in turn calling for fairness in the prosecution of Masimov.

In November, the Almaty-based Kazakhstan International Bureau for Human Rights and Rule of Law published a statement calling for the authorities “to ensure maximum openness of court proceedings” against Masimov and fellow defendants.

“Even in cases where the public is denied access to a trial, the judgment, the main findings, evidence and legal reasoning must be made public,” the group said.

Belatedly for many, the authorities appear to finally be acknowledging the need to be seen to take firm action against police officers and other security agents who used unjustified force against detainees.

"Unfortunately, amid the chaos, some police officers engaged in the cruel treatment of detainees. Nothing can justify torture. Fully 329 criminal cases have been initiated on torture charges. Most of them have been investigated by the anti-corruption service. Thirty-four officers with law enforcement agencies are facing torture charges," Asylov told parliament.

More details on this matter were provided by the head of the anti-corruption agency, Olzhas Bektenov.

Of the 344 people allegedly subjected to physical abuse who agreed to undergo medical examinations, 239 were found to have injuries, while another 105 bore no such signs, Bektenov told lawmakers.

At least 24 instances of torture were carried out by officers with the Almaty regional police, and another three by Almaty city police.

The general prosecutor said investigations into the deaths in custody of detainees in Almaty and other cities – namely, Taldykorgan and Semey – have been completed and that prosecutions will be sought.

One point of mitigation proffered for these abuses by government proxies has been that rank-and-file officers were responding emotively to sometimes bloodcurdling instances of violence by rioters. One claim that was widely circulated, including by state broadcaster Khabar 24, was that two law enforcement officers had been beheaded.

That claim has proven to be false, however.

“During investigations, we fully explored this claim, but we could not substantiate it,” Asylov told journalists.