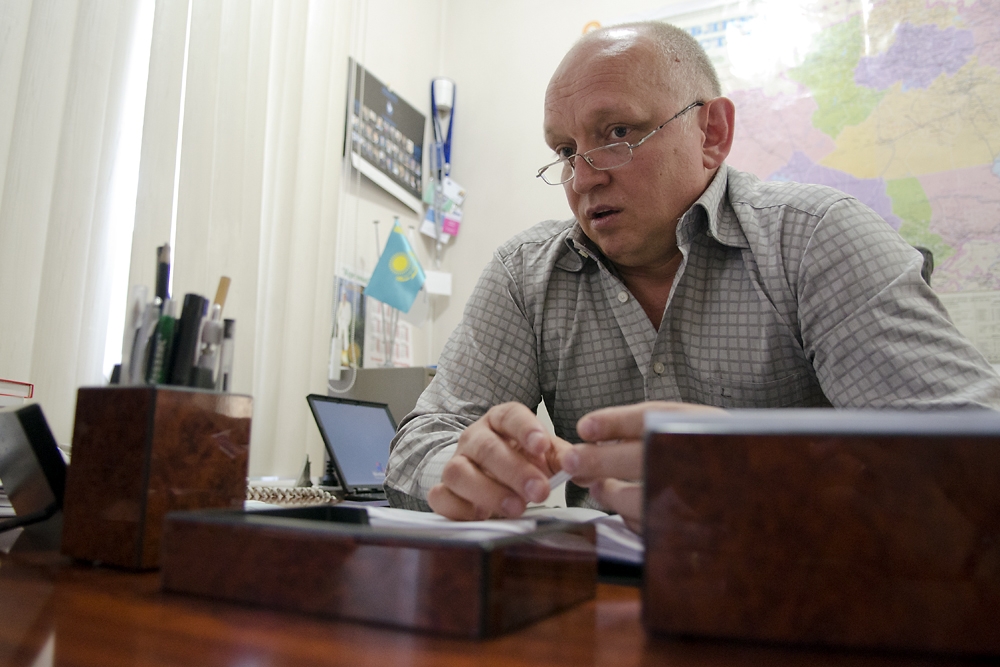 A trial that began August 16 in Kazakhstan is expected to show where authorities in Astana demarcate the border between legitimate political expression and criminal behavior.

Vladimir Kozlov, leader of the unregistered Alga! party and a vocal critic of President Nursultan Nazarbayev, is the most prominent of three defendants on trial in the Caspian Sea city of Aktau in western Kazakhstan. The other two defendants are: Serik Sapargaly, an activist from the People’s Front political alliance; and Akzhanat Aminov, a former oil worker from Zhanaozen who was convicted last summer of leading an illegal strike. That labor action became the catalyst for violent clashes in December that left 15 dead, according to official figures.

Kozlov and Aminov were charged with three criminal counts: fomenting social unrest, carrying a prison sentence of up to 12 years; calling for the forcible overthrow of the constitutional order, which is tantamount to calling for the overthrow of the state and carries a seven-year term; and setting up a criminal group, an offense punishable by up to 12 years in prison. Sapargaly faced only the first two counts. Kozlov pleaded innocent on the trial’s first day, while Aminov pleaded guilty and Sapargaly acknowledged some responsibility without admitting guilt, the Bnews.kz website reported.

The trial raises questions about freedom of expression in Kazakhstan. Authorities profess to value legitimate opposition, while contending that Kozlov and his fellow defendants were determined to incite violence. Critics contend that officials are manipulating laws in order to quash lawful dissent.

The trial is drawing international attention: Visiting Almaty on August 15, US Assistant Secretary of State Robert Blake said Washington hoped for a “fair, impartial and open” trial that “will not undermine some of the progress that Kazakhstan is making to develop a multi-party democracy.”
Human Rights Watch (HRW) also urged Astana to ensure a fair trial. “Authorities should guarantee all [the defendants’] due process rights, as anything short of a scrupulously fair trial will only serve to cast further doubt that the case against these men is arbitrary and politically motivated,” Mihra Rittmann, HRW’s Central Asia researcher, said.

Astana has repeatedly expressed a commitment to a fair, transparent and even-handed judicial process over the Zhanaozen violence. All trials of police and civilians held to date have been open, with access for journalists and rights advocates.

Nevertheless, there has been controversy over whether justice was genuinely meted out in previous Zhanaozen-related trials, and there is already controversy over the latest proceedings. Kozlov was given just three weeks to acquaint himself with over 60 files of case material prepared by 67 investigators working on his case, his wife Aliya Turusbekova told the Guljan website. She said parts of the Russian translation of the material, originally written in Kazakh, were incomprehensible.

The trial is being held in Kazakh, a language Kozlov does not speak, with Russian interpretation, leading supporters to suggest he is at a disadvantage (the other defendants speak Kazakh). His Alga! party tweeted on the first morning that the interpreter was struggling to translate a court ruling.

Rights advocates have also expressed concern about what HRW’s Rittmann described as “secrecy surrounding the investigation.” No specifics have been released about what the defendants did to justify the charge of calling for the overthrow of the state order.

An official investigation concluded that the Zhanaozen unrest was fomented by “third forces” from outside Kazakhstan and perpetrated by activists on the ground. Investigators have accused exiled oligarch Mukhtar Ablyazov of masterminding the violence for political ends with a UK-based accomplice from Kazakhstan, Muratbek Ketebayev. Ablyazov, who is currently on the run from British justice in a fraud case, is a political foe of Nazarbayev.

Investigators have alleged that Ablyazov and Ketebayev used Kozlov and Sapargaly, along with the pair’s respective political organizations, to channel funds and provocative printed matter to strikers. The two defendants deny the accusation.

On the first day of the trial the prosecution accused Alga! of being “extremist,” the party said on Twitter. According to tweets from activists present in the courtroom, the prosecution accused the defendants of involvement in a conspiracy with Ablyazov and Ketebayev, and of politicizing what had been a purely industrial dispute in Zhanaozen.

The details of what happened in Zhanaozen before and during the December 16 violent clashes remain a matter of dispute. In July, United Nations High Commissioner for Human Rights Navi Pillay called for an independent international probe into whether the use of live fire was “necessary and proportional,” and into allegations of torture of detainees. Astana dismissed Pillay’s remarks as “one-sided.”

Officials accept that all 15 fatalities were caused by the security forces, with 14 shot by police and one dying from injuries inflicted while in custody by an officer who was never identified. Six police officers are serving sentences from five-to-seven years over the killings.

The fact that nearly three times as many civilians as police are already serving prison sentences over the unrest has stoked tensions in Zhanaozen. Although most of the 45 civilians convicted to date have been freed under an amnesty, 17 were jailed for terms of three to six years. The longest sentence, given to former oil worker Roza Tuletayeva, was reduced from seven to five years on appeal.

Supporters of Kozlov, Sapargaly and Aminov believe they have been singled out as political scapegoats for the violence. Other activists expected to stand trial alongside them were quietly released this summer.

Their supporters are convinced the trial is politically motivated and are expecting long prison terms. Nevertheless, Kozlov remains defiant: A photograph from the courtroom carried by the Respublika newspaper showed him inside the glass cage in which defendants are placed in Kazakh courts grinning and raising two clenched fists.