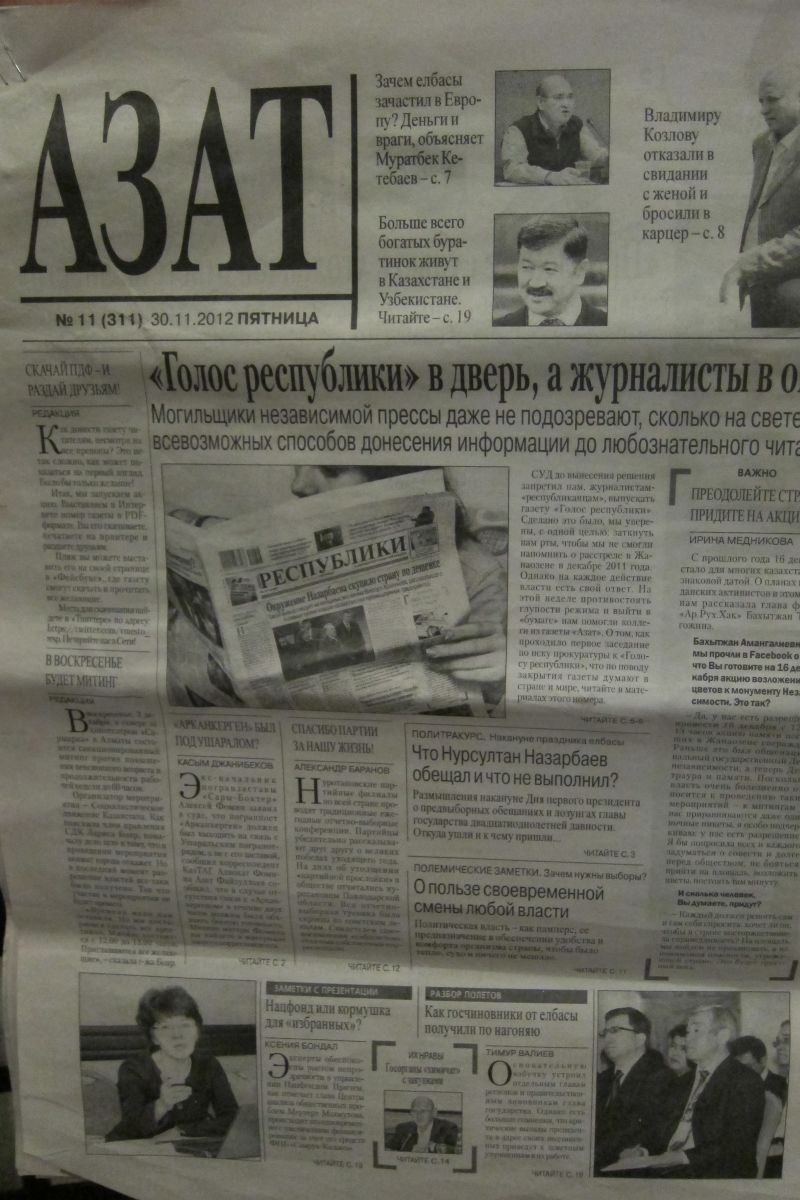 Respublika has been suspended by the courts, but published last week under the name Azat (Freedom). Photo: EurasiaNet.org

A prominent Kazakh opposition party, Alga!, and outspoken media outlets are fighting a legal battle against a bid to shut them down. They say authorities are attempting to muzzle dissident voices in Kazakhstan.The move to close Alga! -- whose leader Vladimir Kozlov is serving a jail term for allegedly inciting fatal unrest in Zhanaozen last December, which he denies -- has become bogged down in a legal paradox: Alga! has been arguing in court that it cannot be closed because it does not exist, since the authorities have for years refused to register it and make it legal. Alga!’s case has been adjourned to December 11.One media outlet, the Stan TV Internet television station, has already been ordered to close by a court, which on December 4 declared its output “illegal,” Kazakhstan’s Adil Soz media watchdog reported. A separate court hearing on December 6 involving the Respublika weekly was inconclusive; the judge adjourned the case until December 13. That closure attempt also targets associated outlets and web pages: a total of eight newspapers and 23 websites, including Respublika’s Facebook and Twitter pages. The newspaper has been suspended by the courts, but published last week under the name Azat (Freedom). Deputy editor Oksana Makushina has condemned the closure move as a “reprisal” for the newspaper’s critical reporting.Vzglyad newspaper (whose editor Igor Vinyavskiy was arrested in a post-Zhanaozen crackdown and later amnestied) and the K+ satellite TV channel are also being targeted for closure. Prosecutors allege these outlets aired material “aimed at inciting social enmity” and contained calls to overthrow the state in their reporting on the Zhanaozen unrest, and that they are funded by fugitive oligarch Mukhtar Ablyazov (who is on the run from British justice in a separate fraud case). Other media outlets are also under pressure. The Guljan website said on December 5 it had been ordered by a court to close for three months for reasons yet to be established. Editor-in-Chief Guljan Yergaliyeva has recently been pursued through the courts over unpaid damages for libel charges.She blamed “the obvious desire of [President Nursultan Nazarbayev’s administration] to destroy us” for the move.The crackdown has sparked international condemnation: On December 4 Paris-based media watchdog Reporters Without Borders condemned “unprecedented pressure” on the independent media in Kazakhstan.