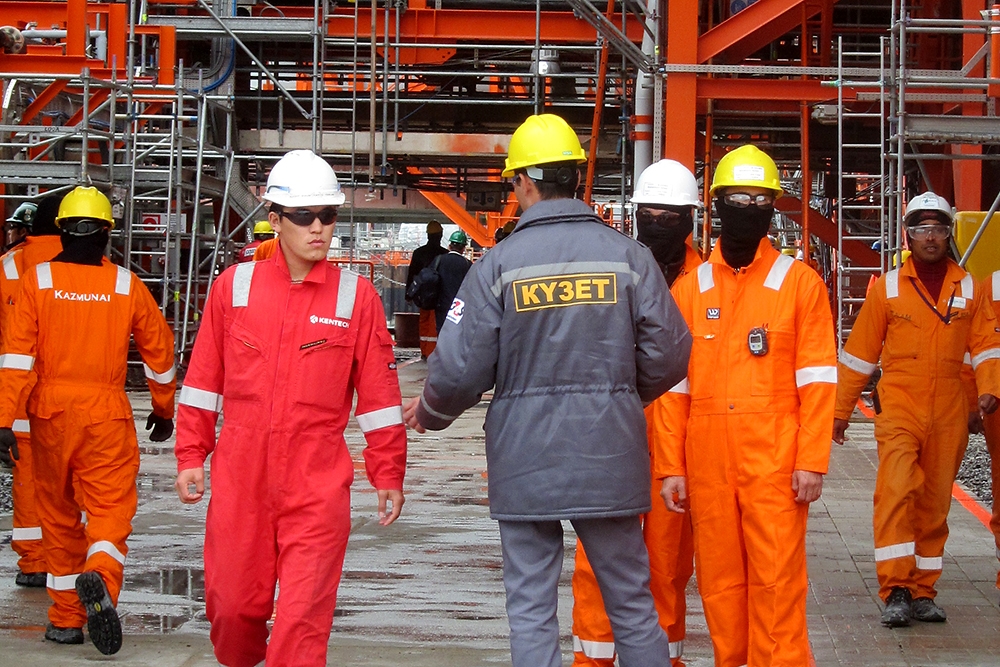 As the slump in prices for energy commodities continues, Kazakhstan is expecting large job losses in the oil and gas industry. (Photo: Joanna Lillis)

Hard times need hard labor laws. At least that is what Kazakhstan has decided. This week, President Nursultan Nazarbayev signed off on legislation that stacks the cards more strongly in favor of employers.

Supporters of the changes, which will go into effect in January, hail what they cast as the bold liberalization of a labor market that had long remained constrained by Soviet-era labor laws. The changes, they also argue, will boost business and attract more foreign investment.

While entrepreneurs are endorsing change, however, there is less enthusiasm among advocates for workers’ rights, who worry the revised law erodes the rights of employees.

In a nutshell, the law will make it easier to lay off workers.

The timing of the labor law changes could not be better for the government. With the economy in rough shape, companies – including state-run ones – are being squeezed and are facing increasingly narrow margins. Greater flexibility in hiring and firing can enhance companies’ ability to keep losses in check in turbulent times.

Just as Nazarbayev was approving the labor code on November 23, Energy Minister Vladimir Shkolnikov predicted major job losses in the oil and gas industry, which has seen profits evaporate because of low prices for energy. “The amount of service work in 2015 has shrunk by 25 percent,” he was quoted as saying by state news agency Kazinform. “If everything continues next year, and operational costs are tightened and preparation work on fields drops, then about 40,000 people are at danger of being downsized.”

Under the revised labor code, employers can now lay off workers when “reduced volumes of production, labor and services provided are damaging the economic well-being of the company.” Government officials have been candid in admitting that the wording of the amendment was shaped in part by the current troubles buffeting Kazakhstan’s once-buoyant economy. Growth is expected to be a relatively meager 1.2 percent this year.

Workers might wish the wording of the legislation was a bit more precise. Assessing what constitutes the well-being of a company is tricky even in the best of times.

“This is confidential commercial information to which workers and not even courts deliberating on labor disputes have access,” Inessa Kuanova, an expert on labor law and former judge, told a recent roundtable in Almaty organized by the Kipr analytical group to discuss the legislation. “As a result, a worker dismissed on this basis … could file suit to be reinstated to his job, but he will have no evidence and the court will have no legal basis to secure that evidence.”

Another provision allows employers to redeploy individual workers across departments in times when a company is instituting shorter work weeks as a way of cutting costs. That leaves employees liable to transfers to locations distant from their existing place of work. Several companies in the industrial and energy sectors have already resorted to such redeployments in response to the economic crisis.

Some measures look set to weaken collective bargaining mechanisms. For example, the numbers of workers at a given enterprise required to gather and vote on any position will now increase to two-thirds, up from the simple majority needed earlier. Even the location and agenda for a workers’ meeting has to be agreed in advance with employers — including if employees are meeting off site and in their own time.

“This is a very controversial and, as far as I am concerned, from a practical point of view, inexplicable,” Kuanova said.

With those conditions in place, it will become especially difficult to adopt decisions on taking industrial action.

Speaking at the Kipr roundtable, Sergei Belkin, president of the Confederation of Free Trade Unions in the Karaganda province, said that the laws watered down employees’ ability to defend and promote their rights. “In times of economic growth, unions negotiate about increases in salary and social guarantees. In times of crisis, they mainly negotiate to preserve earlier agreed social guarantees,” Belkin said. “The level of guarantees has been reduced by law.”

The labor code has been rushed through with little by way of public consultation and, for that matter, debate. Belkin complained that even while the draft bill was making its way through the lower house and the Senate, union representatives were unable to review the document. Workers’ representatives complained even after the labor code was adopted that they had no access to it.

Only three parties are represented in the lower house of parliament: Nur Otan, the ruling party whose positions mirror those of Nazarbayev, the pro-business Ata Meken party and the Communist People’s Party of Kazakhstan. All are strong backers of the new code.

Zhambyl Akhmetbekov, a former Communist leader and sitting member of parliament, struck a remarkably capitalist note in his comments about the reforms. “Workers might get the feeling that they could end up jobless. On one hand, it will stimulate them to work well. Because there are some workers that do nothing from morning till night, are not productive, but still get their salaries,” Akhmetbekov told Radio Free Europe/Radio Liberty’s Kazakh service, Radio Azattyq.

Some organizations declined to join the government-approved federations, viewing them as a threat to their independence. Hundreds of unions failed to meet a deadline for re-registering with the authorities by July this year, or were rejected by the government as ineligible. That has left thousands of former union members unable to engage legally in collective bargaining.

“A trade union organization is a restraining factor that can alleviate a misunderstanding between workers and the employer,” Larisa Kharkova, president of the Confederation of Free Trade Unions of Kazakhstan, which failed to gain official recognition under the new law, told Forbes Kazakhstan magazine as the deadline for registration passed in July.

“The loss of a large number of independent trade unions could lead to a rise in mass protests,” she warned.

Kazakhstan has another go at KazMunaiGaz float