Kazakhstan: Pension pot grab leaves the poor in the cold

A government stimulus has helped the moneyed invest and driven up property prices. 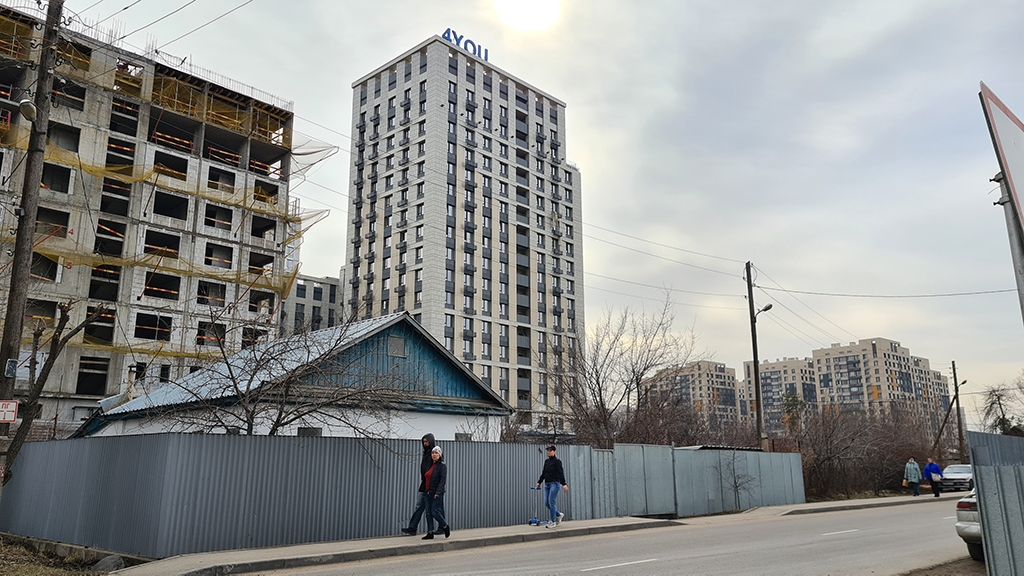 The cost of housing has spiked under the government's program. (photos by Almaz Kumenov)

Former gym teacher Indira Dikhanbayeva lives with her husband and two small children in a rented house in Zhapek Batyr, a village around one hour’s drive from downtown Almaty, Kazakhstan’s business capital.

The accommodation is small. The improving weather is a blessed relief, because the children can play outside, instead of sitting in the house watching cartoons.

Dikhanbayeva’s husband makes $300 per month as a highway toll-booth operator. Out of that income, $60 goes for rent.

But the family will soon have to find a new home. The owner has asked them to move out.

“I’m so tired of roaming around,” Dikhanbayeva told Eurasianet.

The increasing cost of rent is making this all the more difficult. And the state’s attempts to help may be partly to blame.

Earlier this year, the government enacted a populist measure trailed by President Kassym-Jomart Tokayev at September’s state-of-the-nation address by giving people access to their state pension pots. The intent was to boost spending and investing power dented by the economic fallout of the COVID-19 pandemic.

“Is it really right that we cannot provide affordable housing to people toiling in the villages and improve the lives of our many fellow citizens?” he told lawmakers at the time.

Many investment-savvy middle-class types used their windfall to invest in property, which has caused the real estate market to heat up.

The poorest, however, are able to access only meager amounts and find themselves having to cope with the inflationary pressures of the state’s unfocused largesse.

The way it works is that citizens are able to access their state-run pension funds early, although only to buy property or make other capital investments. People with an excess in their savings pot – in other words, amounts above a government-set threshold – are able to benefit from the concession. Different age groups are eligible to access varying amounts.

The state-run Single Accumulated Savings Fund, or ENPF in its Russian initials, has since the start of the year been inundated with applications. As of March 25, more than 245,000 application were received. Around one-third were deemed ineligible, but the remainder have been given the green light to claim 865 billion tenge ($2 billion).

The profile of unsuccessful applicants matches what might be expected. As the ENPF has explained, refusals have occurred when “the requested amount exceeds the amount of pension savings available for withdrawal.”

Dikhanbayeva says that over the years that she worked, making $200 a month, she accumulated less than $700 in her retirement account.

“I have nothing to withdraw,” she said. "After all, I am a simple teacher, not a financier or an oilman.”

Sure enough, the ENPF reports that most of the applications came from the business metropolis of Almaty, Nur-Sultan, the capital city, or from prosperous oil regions, like Mangystau and Atyrau.

And one already measurable effect of the pensions pot reform has been to drive up prices for housing.

Nurgali Amankulov, an analyst in Almaty at the Favorit real estate agency, which specializes in the high-end segment of the market, told Eurasianet that interest from buyers has grown since the start of the year and that more transactions are being made with pension savings.

“One of my wealthy clients took out more than 50 million tenge ($120,000). She bought an apartment and is now renting it out,” Amankulov said. "She admitted that it was like a nice gift from heaven for her."

Official data from January and February shows that the cost of housing in Kazakhstan jumped by more than 13 percent.

RFE/RL's Kazakh service, Radio Azattyk, quoted one person hoping to raid their pension pot as complaining that while their application for withdrawal was being considered, the price per square meter at a new residential complex in Almaty had risen from $1,050 to $1,380.

The knock-on effect on rent is being felt too.

Tokayev gives every appearance of having been blindsided by all this.

On January 26, weeks after the pension pot grab got underway, Tokayev ordered the government to “adopt concrete measures to contain speculation and prices in the real estate market.”

“They’re writing about this everywhere. That prices for real estate are on the rise,” he said at the time.

Pension reform is not the only culprit, though – it has only added to an existing problem.

Yelena Bakhmutova, head of the Association of Financiers of Kazakhstan, told Eurasianet that a leading reason for the recent rise in housing prices is the cost of building materials.

This is in turn related to another of the government’s top-down initiatives to provide prospective home-buyers mortgages at preferential rates. That program has enabled many to make small down payments and take out low-interest mortgages.

According to Bakhmutova, government mortgage-subsidy programs led to a 34 percent rise in the volume of mortgage portfolios at Kazakh banks in 2020. Fully 70 percent of the rise in new debt is accounted for by mortgages.

Meanwhile, Amankulov, from Favorit real estate agency, noted that the price surge is a self-perpetuating phenomenon. The buzz in the media and across social media is creating demand and expectations.

“Apartment sellers have started to unjustifiably raise prices in anticipation of an influx of pension money,” he said.

Bakhmutova cautioned against spying long-term trends, though, saying that while she expects the price rise to persist for a brief period, “a correction will with a very high probability take place.”

No correction is going to be enough for the likes of Dikhanbayeva, who can only dream of buying an apartment for the family.

“That would be a utopia in our position,” she said. “I would be happy if we could at least rent a nice, affordable home.”