The reputation of Kazakhstan’s police has suffered blow after self-inflicted blow. And few seem to believe the government is interested in reform. 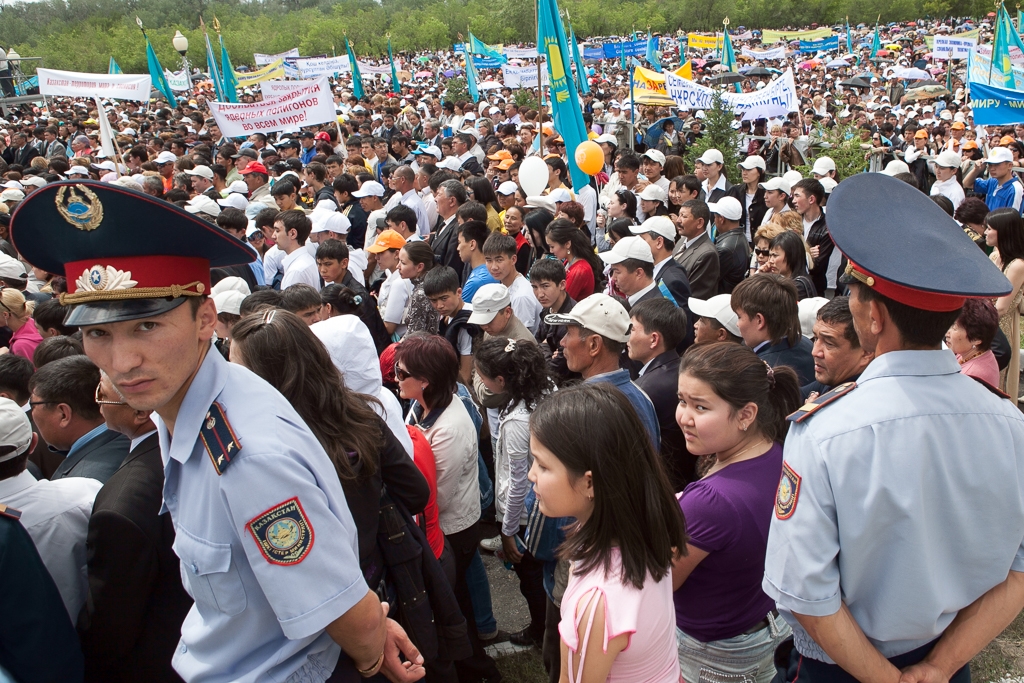 A graceful star on the ice and a model citizen away from it, figure skater and Olympic bronze medalist Denis Ten was the antithesis of the streak of rottenness running through Kazakhstan’s law enforcement system.

When Ten was fatally stabbed in central Almaty last July while confronting men trying to steal his car mirrors, public opinion turned bitterly against a police force whose standing has long been in the doldrums.

The volume of indignation was so great that people’s outpourings formed the makings of a performance called Punch in the Face, created by Almaty-based theater collective ArtiShok. The play saw actors coming up to the microphone to read out real Facebook posts and articles penned immediately after Ten’s murder.

Extras in police uniforms idled in the background. From time to time, a policeman would cease munching noodles in order to remove the microphone from a speaker.

“We didn’t want to show police as bad and evil or good and kind,” ArtiShok’s creative director Galina Pyanova said. “[In our production], they were just listless.”

Six months on from Ten’s death, the two men held over the incident are facing lengthy sentences on theft and murder charges. A woman identified as a suspected accomplice may also receive punishment.

But neither the passage of time nor the prospect of the alleged killers’ conviction has done anything to bolster the image of the police force.

At the beginning of the year, the reputation of the police force suffered another blow when a senior officer at a training academy in the central city of Karaganda appeared in a clip sending season’s greetings in a manner befitting an underworld figure.

“I wish our brotherhood prosperity up to the seventh generation so that our great-grandchildren will be able to use our connections,” he began, in a clip he filmed of himself before a group of cheering colleagues. In the same footage, he lightheartedly likened the police to “a gang.”

A leaked version of the video went viral, unleashing a flow of mockery and disgust on social media. The outcry was such that the officer in question was fired.

If Ten’s killing was a “watershed event that made the hatred and distrust of the police a public good,” then the viral clip served to reinforce negative views on law enforcement, said Erica Marat, an associate professor at the National Defense University in Washington and author of a book on police reform in the former Soviet Union.

At a traditional end-of-year chinwag with handpicked journalists, 78-year-old President Nursultan Nazarbayev acknowledged that the Ten case had caused ripples and called for “a new type of police.” One change proposed by the president was to have more police officers drawn from the ranks of law school graduates.

On January 8, Deputy Interior Minister Zhanat Suleimanov announced that some 1,200 officers of precisely the sort Nazarbayev recommended would be trained over the next three months. At the same time, Suleimanov revealed that the number of police academies would be cut from 12 to five, indicating that the emphasis is turning from quantity toward quality.

Meanwhile, Interior Minister Kalmukhanbet Kasimov had pledged a more wholesale restructuring of the force. Kasimov said in December that roughly 450 management-level staff and other administrators would be laid off, freeing up tens of millions of dollars for regular cop salaries.

But these kinds of measures are just “declarative," said Bakytzhan Toregozhina, a noted civil society figure who has monitored the police for two decades.

The disgraced Karaganda officer’s reference to “connections” is all too relevant in a force where clannishness has now completely eclipsed competence, the activist told Eurasianet.

“Older officers who had better training and levels of professionalism were pushed into retirement and replaced by stooges who then ensured that their own stooges got jobs. The police became more and more like a criminal society,” she told Eurasianet.

One of the greatest sources of public revulsion over the Ten murder, said Toregozhina, was what she described as the open secret that car theft is an area of crime benefiting from police patronage. Officers look the other way in return for favors, Toregozhina claimed.

But voices such as Toregozhina’s are broadly ignored by policymakers. And this may represent the most significant stumbling block to any reform.

Indeed, people like Toregozhina are not only disregarded, they are actively viewed as the enemy. On the occasion of Independence Day, celebrated last year on December 17, the activist decided not to leave her apartment after she spotted a patrol car outside. Police routinely scoop up activists for temporary detention on major holidays so as to avoid the possibility of them attending unauthorized rallies.

Dozens of civil society figures were detained on that December 17 – a day that also happens to mark the anniversary of two historic outbreaks of bloodletting – the Almaty anti-Soviet rallies of 1986 and the Zhanaozen oil worker riots of 2011. In the latter episode, police shot dead many unarmed and fleeing men who had been rallying for months in a demand for better pay.

In 2012, one year after the events in Zhanaozen, Toregozhina spent 15 days in detention for planning to hold a political rally on the independence holiday.

Given that such repressive practices remain routine for a regime uninterested in broader political overhaul, there are doubts about whether the mooted law enforcement revamp will be sufficient to change public perceptions.

Marat of the National Defense University thinks not. Indeed, top-down efforts will likely only result in a "refurbishment" of existing police practices, she said.