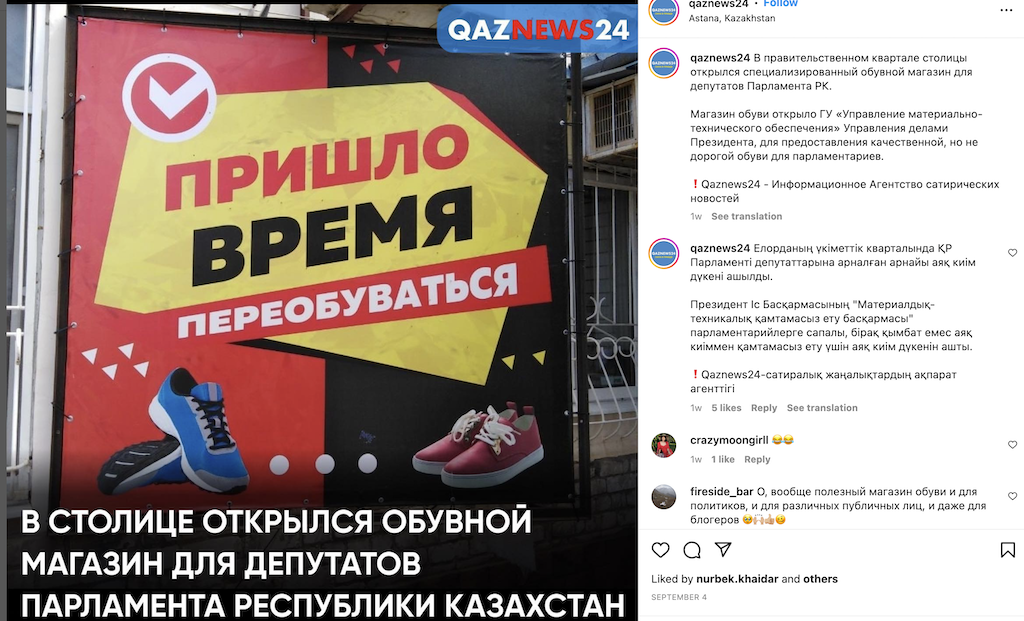 Not news: A recent gag on the Qaznews24 account at the expense of lawmakers.

Police in Kazakhstan have dropped their investigation into a satirist whose Instagram-based spoof news account was acting, they said, as a platform for disseminating knowingly false information.

Temirlan Yensebek, the Almaty-based creator of the Qaznews24 page, told news outlet Mediazona on September 14 that the police decided that his actions did not constitute a crime.

The investigation dragged on for an entire year. Yensebek, 25, an activist in the pro-democratic reform Oyan, Qazaqstan youth movement, was detained and interrogated by police last May and has lived under the cloud of possible prosecution ever since.

The explicitly comic content on Qaznews24 typically made officials the target of jokes. Pretend news items were clearly labeled as fictitious, although given the stories in question, even that disclaimer must have struck many as redundant.

One post published recently carried the bogus news that a shoe shop exclusively for lawmakers had opened in the capital, Nur-Sultan. The accompanying image was a photo of a real advertising billboard bearing the slogan “Time to Change Shoes.”

The joke takes some explaining, but it is clear to anybody following the news in Kazakhstan that the intent is satirical.

The Russian expression in the advertisement carries the meaning of changing sides or turning coat. This an allusion to the fact that lawmakers once supportive of former President Nursultan Nazarbayev have since the start of the year, following a period of deep political turbulence, decided they are not so keen on him after all. In a recent demonstration of this change of heart, a group of lawmakers recently backed a proposal to change the name of the capital from Nur-Sultan back to Astana, as it was called until 2019.

It turns out that Kazakh officials don’t appreciate sarcasm. Almaty police said last year that they felt Qaznews24's posts were "causing a mixed reaction from the public, as they misinformed the population and misled citizens."

“Despite the absurdity of these posts, users were actively reposting them, forwarding fake news to one another via instant messengers,” they said in a statement after Yensebek was detained.

The Instagrammer’s lawyer, Zhanara Balgabayeva, told Mediazona that as part of the investigation, police conducted a two-pronged investigation, to scrutinize both the linguistic and political aspects of Yensebek’s posts. After subjecting the Instagram account to this analysis, they determined that humorous content could not fairly be qualified as knowingly false information.

Although this might have been a case of police overreaction, there may be grounds for sympathy. The phenomenon of wild rumor-mongering on social media resources is indeed very strong in Kazakhstan. Unlike Yensebek, disseminators of unproven allegations do make claims to verisimilitude.

The COVID-19 pandemic was a boom time for such fakes. Claims that the government was crop-dusting cities with the coronavirus or that officials were pushing the vaccines as a ruse to forcibly microchip people circulated freely. This trust-sapping disinformation may have gone a long way toward undermining the vaccination push, thereby likely causing a loss of lives.

That the information ecosystem is so weak, however, is to a strong extent a legacy of government action. A cocktail of repression and harassment has over the years driven many independent journalists and outlets out the industry. Most of what is left are anodyne websites and broadcasters that by and large hew closely to the pro-government line.

News consumers hungry for content more compelling than what those outlets are able to offer are prime prey for purveyors of fake news.