The official accounts of anti-government demos are proving muddled and contradictory. 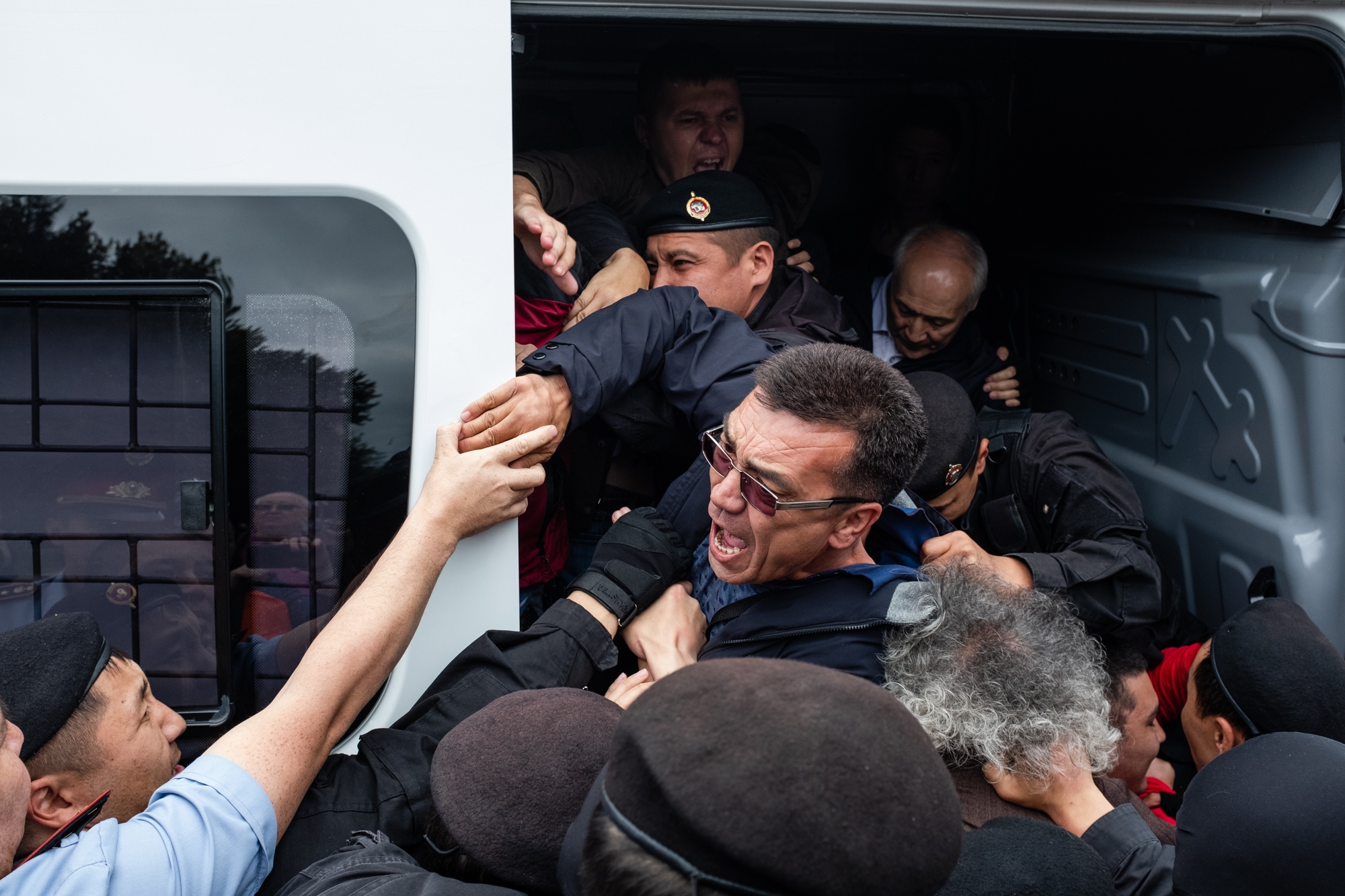 I scream: Protester being shoved into a police van in Almaty on June 9. (Photo: Danil Usmanov)

Police in Kazakhstan have updated their tally of people they say were detained during recent anti-government protests to 4,000.

Interior Minister Yerlan Turgumbayev said on June 18 that over a five-day span, 677 people were placed under arrest and that another 305 were fined. The remainder had their details taken and were released within three hours, he said.

Police representatives had previously claimed only 700 people were detained over that timeframe.

Demonstrators had come onto the streets to register unhappiness with the June 9 presidential election, which they felt was insufficiently democratic.

Turgumbayev was careful to emphasize that police made no use of clubs or tear gas.

“Only physical force was used, and this was done to contain the unrest,” he said.

While insisting his own men exercised restraint, the minister sought again to cast demonstrators in the guise of violent troublemakers by claiming that more than 300 law enforcement officers suffered injuries. Six of them purportedly required hospitalization, following assaults from protestors with sticks, stones and other weapons.

It is unclear from Turgumbayev’s remarks where he is alleging police officers came under physical attack. Eurasianet correspondents in Almaty, the business capital, reported seeing no such incidents.

As evidence of crowd violence, the General Prosecutor’s Office last week released video footage that they said showed an angry mob charging rows of police officers. Some of those images, however, appear to contradict what Turgumbayev said, since they clearly show riot police carrying shields and clubs. At one point, the commentator in the General Prosecutor’s Office video claims that rioters “stole the special equipment of the police,” while showing a man walking off with a shield and club – the same objects that Turgumbayev insisted had not been deployed.

Although they were successful in quashing the protests themselves, the authorities have acquitted themselves poorly in handling the public relations fallout.

President Kassym-Jomart Tokayev, who was elected with 70 percent of the vote, has promised new legislation will be drafted to allow for peaceful protests. He told Euronews in an interview that those who wished to do so could, under the proposed arrangement, file for permission to demonstrate and that space would be set aside for them.

It is unclear how this would represent a difference from the current situation. As things stand, authorities as a rule deny permission for demonstrations critical of the government. In the very rare cases that they do grant permits, demonstrators are required to muster in remote, out-of-the-way locations. The ultimate intent is to ensure that those demonstrations are as ineffective as possible and that opponents of the government are unable to convey their message to other members of the public.

In his interview to Euronews, Tokayev acknowledged the mood of dissatisfaction that underlay the protests, although he insisted that demonstrators were motivated by social and economic problems, not by political considerations. His solution has been to institute a forum called the National Council of Public Confidence.

“[This national council] will include people who represent the interests of demonstrators,” he said. “The authorities have heard, and we will work.”

Yerlan Karin, an advisor to Tokayev, said consultations have already taken place on the formation of the council.

“Meetings are being held with various public figures and civil activists representing different segments of society,” Karin was cited as saying by Kazinform state news agency. “We are listening and recording all proposals about the composition and format of the National Council.”

He did not specify who precisely has been consulted, however. And the apparent insistence of the police to mischaracterize the recent demonstrations suggests the authorities are not quite yet in listening mode.