Activists say prosecutors need to do more to prove the government is serious about stamping out police abuse. 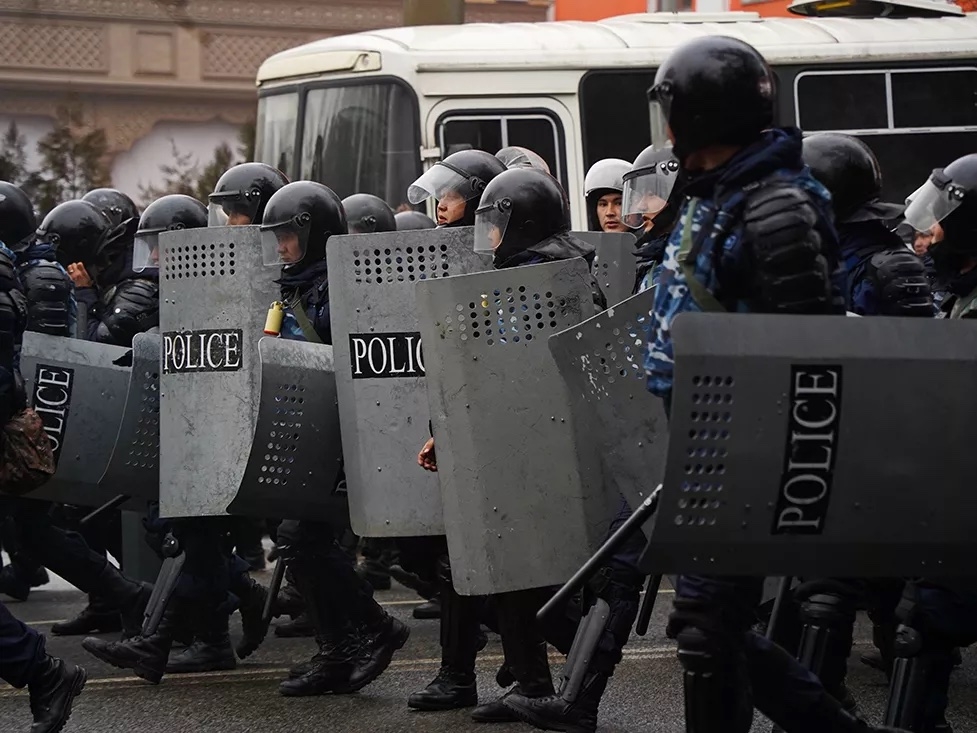 Even President Kassym-Jomart Tokayev acknowledged that detainees were tortured. (Shutterstock)

A court in Kazakhstan has sentenced two police officers to three years in prison after finding them guilty of torturing people detained during the unrest that turned the city of Almaty upside down last January.

A judge at the Bostandyk district court ruled on January 17 that Arnat Bimurzayev and Bakyt Khamit would also be forbidden from working in government service for a period of three years.

Another policeman, Daulet Kalymbayev, was sentenced to 18 months of “limited freedom” and given a lifetime ban from working in government service for failing to report incidents of prisoner abuse, news website Orda has reported.

More prosecutions of police officers suspected of mistreating detainees during what have come to be known as the Bloody January events are expected.

The police officers convicted by Bostandyk district court were charged specifically with torturing an Almaty resident called Timur Radchenko, whom they accused of stealing a car. The court found that Bimurzayev and Khamit decided to mistreat Radchenko, who they assumed had also been involved in the unrest, in reprisal for assaults that had earlier been mounted against their fellow officers.

Of the 238 people known to have been killed during the January 2022 unrest, 19 were law enforcement personnel. According to official figures, around three-quarters of the 4,300 people registered as having sustained injuries were with law enforcement. It is likely, however, that many civilians failed to seek medical treatment out of concern they too would be swept up among the mass of people detained during the disturbances.

Government-critical rights activists have said prosecutors will need to do far more if they are to show that the authorities are serious about taking action against police officers responsible for torturing detainees.

Andrei Grishin, spokesman for the Kazakhstan International Bureau for Human Rights and Rule of Law, or KIBHR, told Eurasianet that in the case that has now wrapped up in Almaty, the offending police officers could only be seen repeatedly striking the detainee. Rights activists have collated accounts elsewhere of far more grisly forms of abuse being meted out to detainees, however. The relatively severe sentence handed down to Bimurzayev and Khamit is simply a bogus attempt by prosecutors to show that they are adopting a zero-tolerance line against rogue officers, Grishin said.

“The authorities probably just want to convey that they are punishing those responsible for torture in connection with the January events,” Grishin said.

Even President Kassym-Jomart Tokayev has acknowledged that torture has taken place. In a speech delivered in March, two months after the alleged incidents, he demanded that investigators bring all cases of abuse into the open.

“Such barbaric and medieval occurrences are contrary to the principles of any progressive society. They are unacceptable for us too,” Tokayev said at the time.

Speaking to lawmakers earlier this month, Prosecutor General Berik Asylov announced plans to file criminal prosecutions over 329 alleged instances of torture and to file charges against 34 law enforcement officers. Investigators have said that at least 24 cases of torture were committed by members of the Almaty regional police, and three more such instances of abuse were committed by Almaty city police officers.

Moreover, investigations into the deaths of detainees in Almaty and other cities – namely, Taldykorgan and Semey – have been completed and criminal cases will be initiated, Asylov told parliament.

The numbers cited by Asylov could certainly be greater.

Olzhas Bektenov, head of the anti-corruption agency, which has taken the lead in investigating torture cases, qualified the data officials have given so far by stating that claims of police abuse are often difficult to prove. Among the reasons he cited for this were the fact that cells often lacked cameras or were fitted with malfunctioning cameras. He added that the testimony of victims could not serve as sole evidence and that many victims were unable to identify their alleged torturers as they were wearing masks or helmets at the time. The long delay between the alleged incident and the victim coming forward to report the case is another hindrance, argued Bektenov, who was also speaking to the lower house of parliament on January 5.

Grishin described such arguments as a smokescreen for the lack of a systematic and effective investigation.

“Those who actually killed and tortured people can get away with it,” he said.