Authorities appear happy to chase the former first family’s money, but are squeamish about accusing them of mutiny. 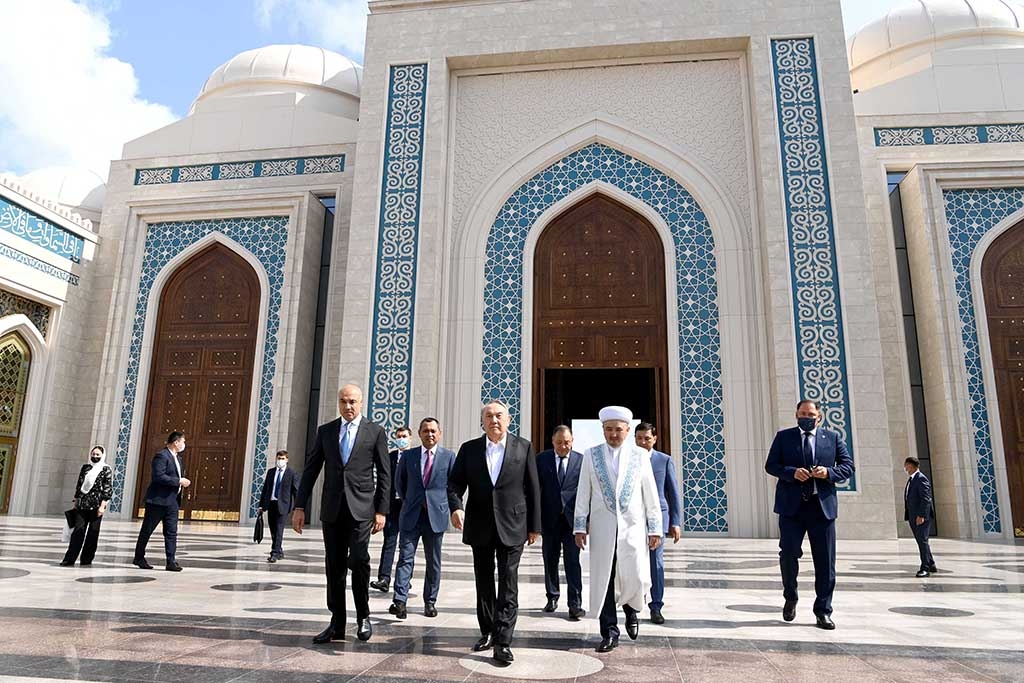 Nazarbayev has resumed making public appearances. Here he opened a mosque in the capital city, which is named for him, earlier this month. (Elbasy.kz)

Kazakh investigators say they have completed separate probes targeting an ally and a nephew of ex-president Nursultan Nazarbayev, although neither upcoming trial is likely to shed much light on how the events now known as “Bloody January” unfolded.

In the case of Karim Masimov, the Nazarbayev loyalist who served as national security chief at the time the fatal New Year’s unrest broke out, that is because the treason proceedings against him will take place entirely behind closed doors.

As for Kairat Satybaldy, Nazarbayev’s nephew, it seems unlikely that he will face trial for anything other than large-scale fraud, despite lingering public suspicions of his involvement in the violence that left over 200 people dead.

According to an August 25 statement released by the National Security Committee, the pre-trial detentions of Masimov and one of his erstwhile deputies, Anuar Sadykulov, will be extended until October 6 in order to allow the accused and their legal teams to prepare their defense.

Sadykulov and Masimov face the most serious, cake-topping charge of treason, while four other former security officials face charges ranging from abuse of office to violent attempts to seize power.

Proceedings against this group were declared secret back in January, and the most the public is likely to hear about the case is the verdict, according to experts.

What is clear for the moment is that Masimov is being put forward as villain-in-chief in proceedings related to January’s violence, which began with peaceful protests over a fuel price hike in western Kazakhstan before escalating into clashes that saw government buildings burned and shops looted in Almaty and several other cities.

Over 700 people have been convicted of crimes related to the events.

Kassym-Jomart Tokayev, whom Nazarbayev hand-picked as a presidential replacement after retiring in 2019, claims that the initial protests were hijacked by criminals and ill-defined “terrorists” who sought to unseat him.

But talk of coups is complicated by the fact that Tokayev was viewed as wielding power in a limited capacity prior to January, with Nazarbayev continuing to call the shots via alternative government roles, such as the powerful position of Security Council chair, and highly placed proxies like Masimov – widely understood as a check on Tokayev.

By the time the crisis subsided, Nazarbayev had shed all that power, and Tokayev had become a president in more than just name.

If January was in essence driven by a power struggle, then it is almost unthinkable that Nazarbayev’s own massively influential and fabulously wealthy family, sitting at the apex of the state since independence, played no role in it whatsoever.

Yet so far, investigators have shown little appetite to tie them into the behemoth investigation.

Nazarbayev’s nephew, businessman Satybaldy, was the former supremo’s first blood relative to be jailed after the chaos, but the crimes he has been accused of are of a white-collar nature.

Kazakhstan’s anti-corruption service on August 24 said that an investigation into the corrupt activities of Satybaldy at the national telecoms operator Kazakhtelecom has now concluded, with $500 million returned to the state so far.

The service said that Satybaldy was still being investigated for “acts of tax and customs evasion, legalization of criminal proceeds” and that the state expected to secure “real estate, cars and cash” held in foreign jurisdictions and worth over $900 million from Satybaldy and several other defendants, who – with the exception of his wife Gulmira – have not been named.

When the dust settled on the worst of the January destruction, it was precisely Satybaldy and another Nazarbayev nephew, Samat Abish, that the rumor mill fingered as key players in the conflict.

Back when Satybaldy was arrested in March, the anti-corruption service referred to his status as a suspect in crimes “undermining the security of the state.”

But when prompted by media, both the service and the state prosecutor said Satybaldy was not being investigated over the New Year unrest.

Abish’s status is even more conspicuous.

He is currently only a witness in the investigation against his colleagues despite the fact that he was at the time serving as first deputy in the National Security Committee – senior to Sadykulov.

Nazarbayev, meanwhile, appears safe to make public appearances – most recently to open a large mosque in the capital city that still bears his name – and he and Tokayev continue to speak of each other in positive terms in public.

For as long as that is the case, determining who was responsible for what happened nine months ago will be a thankless task.