He is also blaming Middle Eastern militants for instigating the violence, without providing evidence. 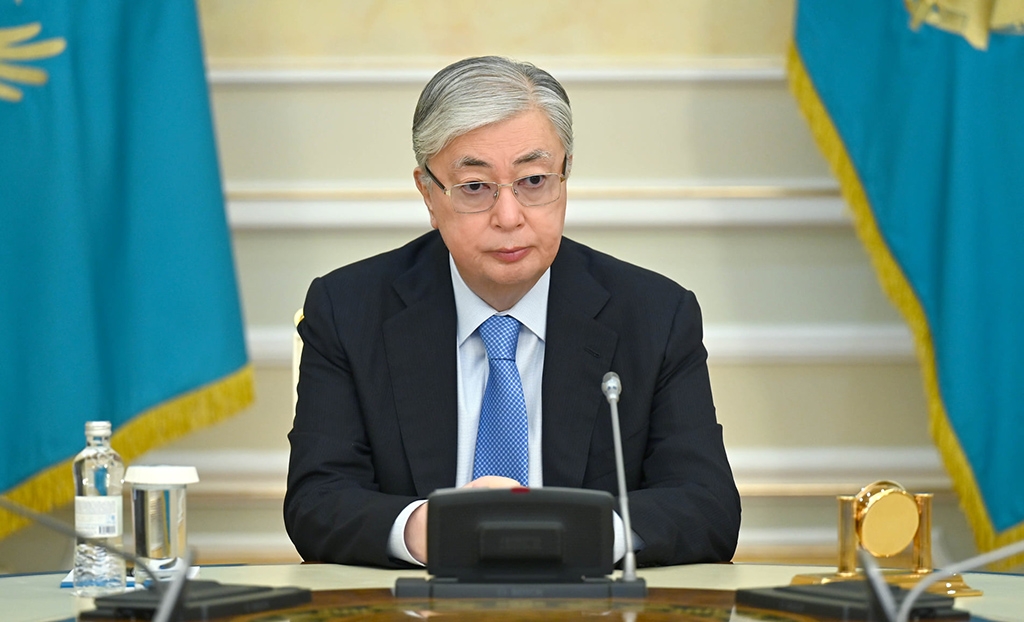 Tokayev has avoided calling the capital by its current name, Nur-Sultan. (government handout)

Authorities in Kazakhstan have begun to flesh out their account of the unrest that convulsed the country last week, laying the blame for what they are now calling an attempted coup at the feet of an international terrorist conspiracy.

Elaborate explanations provided by President Kassym-Jomart Tokayev on January 10 attributed the peak of the violence seen in cities like Almaty to militants from neighboring Central Asian nations, including Afghanistan, as well as further afield, from the Middle East.

Evidence for these claims is still forthcoming. Tokayev has to date also conspicuously omitted to allude to last week’s arrest on treason charges of the man who ran the domestic intelligence service, commonly known by its Russian initials KNB.

Speaking at a teleconference of leaders of member nations of a Russian-led military alliance, Tokayev thanked the bloc for its timely intervention. What had occurred, he said, was carefully preplanned and “coordinated from one center.”

"This is evidenced by the synchronous attack on the headquarters of regional authorities, law enforcement agencies, pre-trial detention centers, strategic facilities, banks, a TV tower and TV channels,” he said. “Airports were seized, roads and railways were blocked, the work of ambulances and firefighters was blocked.”

It was only the involvement of the Collective Security Treaty Organization, or CSTO, that prevented the armed takeover of the government, he said. The intention of the attackers was to first take control of Almaty and then to move on toward the capital.

“The fall of this city would have paved the way to capture the populous south and then all the country. The terrorists were counting on drawing in law enforcement, so that they could strike at the capital of Kazakhstan,” said Tokayev, who notably omitted throughout his speech to refer to the capital, city, Nur-Sultan, by its current name. “We saw a mustering of militants about the presidential residence.”

The Interior Ministry said 8,000 people have been detained all over the country as of January 10.

Tokayev made a point in his address to fellow CSTO leader of distinguishing between armed plotters and peaceful protesters.

“We have never used and will not use military force against peaceful demonstrators," Tokayev said.

Even as Tokayev studiously ignores insistent chatter about the possibility of palace intrigue underlying the disturbances, he has continued a reshuffle that began on January 5 with his removal of his predecessor, the 81-year-old former President Nursultan Nazarbayev, as chairman of the national security council. That post afforded Nazarbayev, who has not been seen in public since late December, ultimate control over the security apparatus. Over the weekend, the deputy secretary of the security council, Azamat Abdymomunov, was also dismissed from his job.

On January 11, Tokayev will present parliament with a new Cabinet that will be tasked specifically with addressing serious social and economic problems. An interim government has been in place since January 5, when Tokayev fired the previous incumbents as unrest began to escalate.

After days of struggling to cope with the fallout of the violence in Almaty, the government is eager to show it is back on the front foot. The state antimonopoly agency over the weekend announced it had initiated criminal investigations against 180 retailers of liquid petroleum gas, or LPG, over suspected price-fixing.

While making a public show of that investigation, there is little certainty authorities will share details of their probe into what is now being cast as an attempted coup.

No information has been forthcoming about the exact accusations being leveled against former KNB chief and Nazarbayev loyalist, Karim Masimov. It has not even specifically been disclosed whether Masimov was arrested in connection with the disturbances.

Addressing the matter of how long CSTO troops were likely to remain in Kazakhstan, Tokayev said their mission would end soon.

“In the near future, the large antiterrorist operation will end, and the successful and effective CSTO mission will end along with it,” he said.

Even though Almaty is gradually returning to normal as shops and banks reopen, some anomalies are persisting. The internet was made available for only four hours of the day. Authorities had previously insisted they were limiting internet access to ensure the alleged militants were unable to communicate among themselves. Also, the city’s airport continued to be closed to civilian flights.