Legal experts say the new rules are not up to scratch. 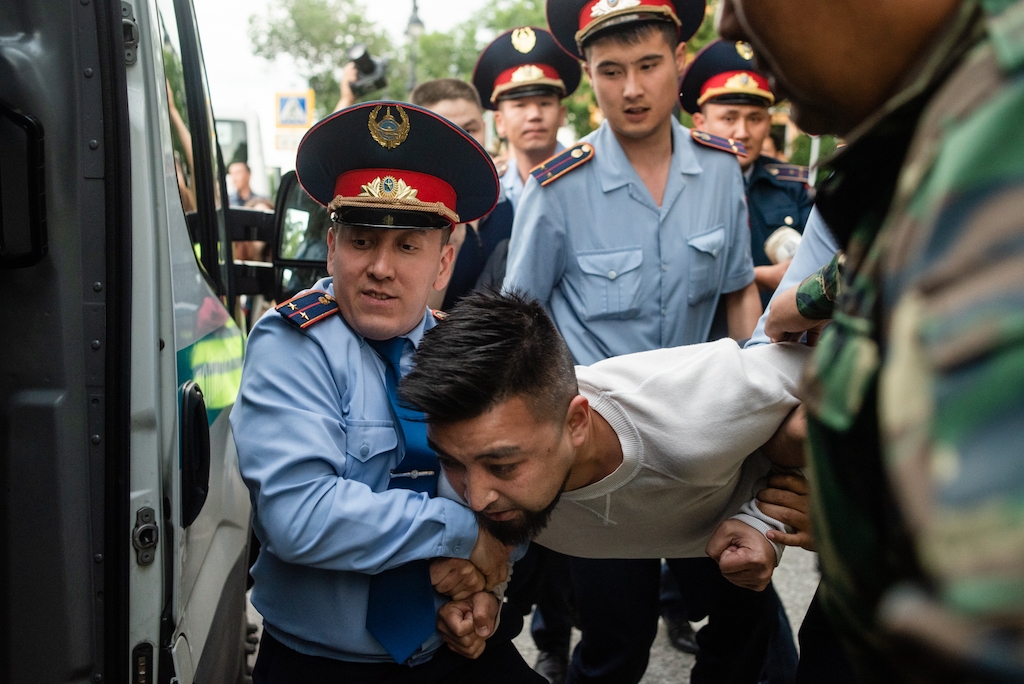 Rough justice: Rallies will, in theory, be allowed to proceed peacefully if organizers give sufficient advance notice. (Photo: Danil Usmanov)

The presidential administration in Kazakhstan has called a freshly adopted law regulating how and where demonstrations may take place as a “paradigm shift” that will transform the nation’s political culture, but the legislation has been greeted frostily by rights activists.

The law arrived on President Kassym-Jomart Tokayev’s table last week following some light legislative ping-pong in the parliament and became statute after it was signed on May 25.

Among the most trumpeted provisions of the new rules is one ostensibly requiring organizers of a rally to provide only advance warning of their intentions, rather than requesting permission.

Yerlan Karin, a special advisor to Tokayev, was effusive in evaluating the law.

“This is not just a new set of norms and rules, this is a cardinal paradigm shift in public policy,” he wrote on his Telegram channel. “It introduces new principles and approaches to the practice of politics. All of this brings with it serious value changes in the political culture.”

The reaction among civil society activists has been much cooler.

Human Rights Watch articulated some of their complaints in an analysis of the draft bill at the end of March.

“The bill still gives the authorities power to approve or reject requests to hold events depending on their form,” HRW researcher Laura Mills wrote. “Government officials can propose alternative locations, times, and dates. If the organizers do not consent to the change, the event will be canceled.”

Others have noted that the government still reserves to right to ban assemblies, prohibit impromptu gatherings and give preferential treatment to pro-government events.

“Organizers must submit detailed notification information five working days in advance of any assemblies, rallies and pickets, as defined in the law. For marches and demonstrations, organizers must seek prior approval 10 working days in advance,” Sarah Cleveland, a professor of Human and Constitutional Rights at the Columbia University School of Law, wrote in her opinion on the bill.

Clément Nyaletsossi Voule, the United Nations Special Rapporteur on the Rights to Freedom of Peaceful Assembly, wrote in an opinion on the bill that even the requirement to provide notification was excessive.

The passage of the law appears to have been slowed but not materially affected by such criticism. One change made in the Senate, before the bill got passed back to the lower house for more scrutiny, was a token gesture broadening the list of authorized places in which demonstrations could take place.

This provision has long stuck in the craw of people wishing to mount rallies. In the rare cases permission had been granted before now, prospective rally attendees in Almaty, the country’s largest city and where most politically active people reside, were directed to an out-of-the-way spot near an old cinema. The intention was unambiguously to ensure that the rally was unseen by the public.

While the list of places where rallies may be held has expanded, it is still short.

The law is the first result of the National Council of Public Confidence, instigated at Tokayev’s urging as a bridge of sorts between rulers and civic activists.

Even while Tokayev may show signs of being willing to entertain political openness, there is a high degree of continuity between him and his predecessor, Nursultan Nazarbayev, who retains considerable sway over running the country through his lifetime posts, when it comes to dealing with hardline opposition.

The Prosecutor General’s Office announced on May 19 that it was designating a group called Koshe Partiyasy (Party of the Street) as extremist on the grounds that it is effectively little more than a rebranded version of the Democratic Choice of Kazakhstan, which itself got that label in March 2018.