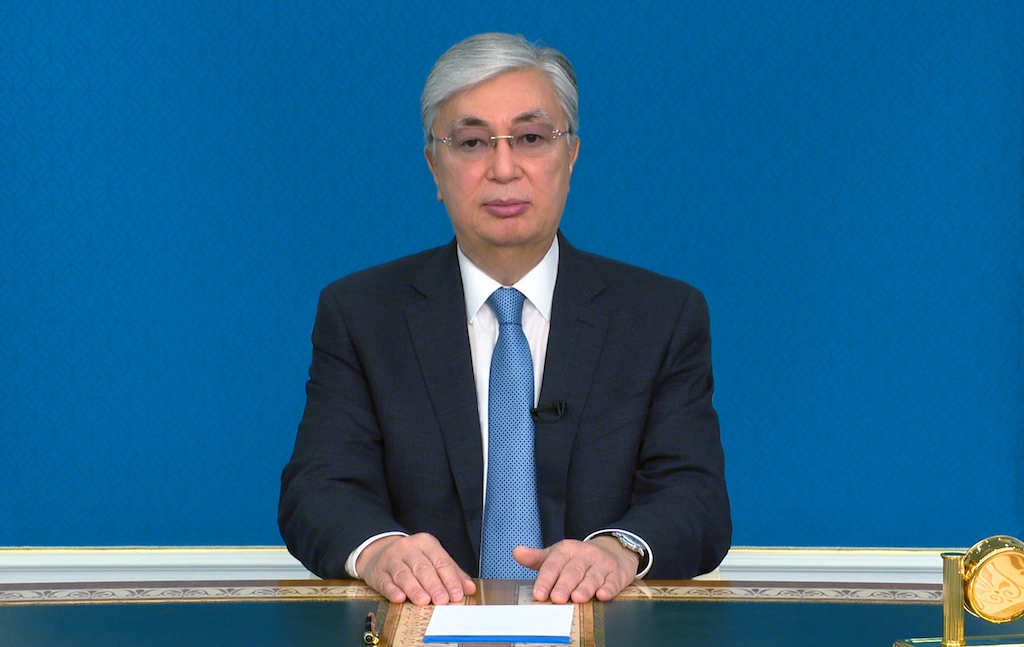 (Help!) not just anybody: Tokayev address the nation on television on March 31. (Photo: Presidential administration)

The president of Kazakhstan addressed the nation on television on March 31 to talk about fresh measures intended to soften the blow of the coronavirus epidemic on private enterprise and pledged more support for healthcare workers and vulnerable people.

At the start of his 23-minute speech, Kassym-Jomart Tokayev thanked doctors and medics, calling them life-saving heroes. The government has recently adopted measures to provide doctors working on the front line against infectious diseases additional support and committed to setting their salaries at rates of up to 850,000 tenge ($1,900), he said. Lower rates are envisioned for auxiliary medical workers, such as ambulance crew members and staff running isolation wards.

Such pledges, if they are followed through on, are especially significant, as workers in healthcare in Kazakhstan have long bemoaned weak salaries and talked about its contribution to perpetrating corrupt practices.

Tokayev said more help will also be going to those most in need. Recipients of pensions and welfare would see those payments go up by 10 percent, he said.

A recent battering of the tenge, which has wilted under the pressure of falling oil prices, has seen it drop in value from 380 to 450 against the U.S. dollar in recent weeks, severely depressing purchasing power in a country that relies strongly on imports for many essential goods.

Previously, there were plans for people furloughed over the period of the current state of emergency, which is at the moment slated to last until April 15, to receive monthly payments of 42,500 tenge. That will now be extended to the self-employed.

Categories of people eligible for free grocery provisions, which used to comprise mainly the poor, have been extended to include all disabled people and the unemployed. That should cover 800,000 people.

Until July 1, people without medical insurance will be entitled to full care. A national health insurance scheme came into effect in January requiring employers and employees to make monthly payments that guarantee them healthcare, but those not in formal employment are forced to make out-of-pocket payments for long-term treatment.

Another tranche of the measures is aimed at supporting businesses, particularly those working in the agricultural sector, and sustaining employment.

Tokayev said it was "of the utmost importance to carry out spring sowing in a timely manner.” For that purpose, 170 billion tenge (more than $380 million) worth of loans will be allocated for farmers. Credit will be repayable at rates of 5-6 percent per annum, as opposed to the 13-15 percent rates usually available on the open market. Growers will additionally be provided 15 percent discounts on diesel fuel.

And so as to guarantee that the work is not in vain, the government has pledged to buy the output of agricultural producers six months in advance, Tokayev said.

Another ongoing effort is to persuade the Eurasian Economic Union, the Russia-dominated trading bloc of which Kazakhstan is a member, to drop import duties within the bloc on important food items.

The government has in recent days fine-tuned its food security policy, rowing back on a total ban on the export of flour – a decision it took out of concern over potential local shortages – and instead instituted quotas. Ukrainian agriculture-focused news website APK-Inform reported on March 30 that Nur-Sultan intends to institute a quota as of this month, allowing the export of 200,000 tons of wheat and 70,000 tons of flour.

As for employment, the government plans to implement projects in the regions surrounding cities now in lockdown as part of anti-coronavirus measures.

Many people have lost work as they live outside the cities and are unable to get past the roadblocks put in place to control movement. Police report regularly on people trying through various means to circumvent the checkpoints.

“People should have a source of income so that they do not have to just stand around at [checkpoint] barriers without a livelihood,” Tokayev said.

The deal has been sweetened for small and medium-sized businesses, which already stood to benefit from tax breaks, deferral on loan payments and low-interest state credit. The most badly impacted sectors of the economy – and these include catering, transportation services, consulting services, the IT sector and tourism – will have employee pension and social payment obligations covered by the government until October 1, Tokayev said.