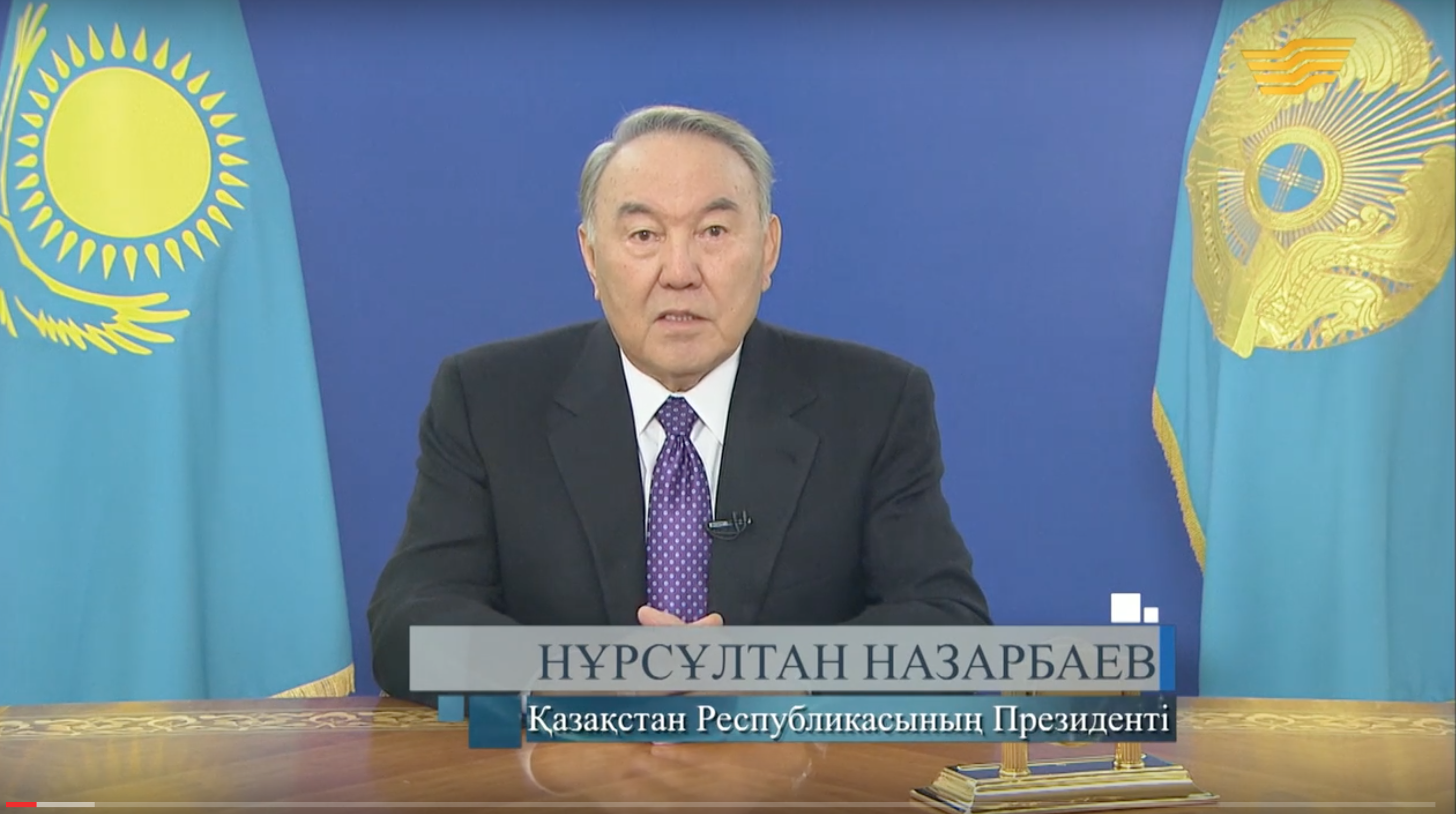 The president of Kazakhstan has delivered a nationwide televised address to outline a formally dramatic dilution of his own powers and a shift to a more parliamentary form of government.

Nursultan Nazarbayev described the strongly presidential model in force since independence as necessary to “overcome the enormous difficulties of forming the state,” but said that the time had arrived for a new model.

“The basic essence is that the president will give some of his powers to parliament and the government,” he said in an adress televised on all national channels on January 25. “The proposed reform is a serious redistribution of power and a democratization of the political system as a whole.”

The vision, which has been described in still fairly vague terms, is one for a mixed form of government that would still leave the president with an ultimate say over the most sensitive matters of state.

Nazarbayev said around 40 areas of responsibility would be delegated from the president’s office to the executive or parliament. Those would include what Nazarbayev termed the “regulation of social and economic processes.” Priority areas should be changed by adoption of legislative amendments by the end of the current session of parliament, he said.

Parliament will assume a greater role in forming the government — a fact that Nazarbayev said would enhance the accountability of the Cabinet.

“The winning party in parliamentary elections will have a decisive influence over the formation of the government,” Nazarbayev said.

With things as they are, the ascendancy of parliament hints at a variation on the status quo considering the fact that Nazarbayev’s Nur Otan party has all but complete control control over the legislature.  The only other parties represented in parliament are token opposition forces who are notable only for their support of the government.

In another ostensible enhancement of the parliament’s status, Nazarbayev suggested it was necessary to simplify the procedure whereby lawmakers could express their lack of confidence in members of the government.

“This will strengthen the control of the legislature over the executive,” he said.

Still, the president will retain veto powers over any decisions adopted by the government and the prime minister.

In one notable renunciation of authority, Nazarbayev said that the time had passed for presidential decrees to be bestowed with the status of law.

Also, parliament will be granted greater authority over local government, which potentially hints at a planned transition away from the existing appointment system for many of the country’s most important local leaders. Mayors and governors of key entities — including the cities of Astana and Almaty, as well as Kazakhstan’s 14 regions, together accounting for around 55 percent of the nationwide population of 17.6 million — are presidential appointees.

Turning to the justice system, Nazarbayev said more effort was needed to “perfect the work” of the Constitutional Council, the justice system and the office of prosecutors. More than rhetoric will be required on this front since the courts remain deeply prone to political interference — including, it is said, from the president’s office — not to speak of corruption.

Nazarbayev described his proposed vision — still a tentative one requiring more work from governmental reform groups, as he said — as a unique Kazakhstani solution based on the country’s specific experiences and requirements.

“We have never copied foreign models of government, and have found our own unique solutions — although there are issues in which we have followed international experience,” he said. “The reform program is our answer to the question about what direction Kazakhstan will take. The answer is clear and consistent and it is the direction of democratic development.”

Public discussions on the proposed constitutional reforms will conclude on February 26, according to the president’s office.

Predictably enough, pro-government political analysts have quickly fallen over themselves with fulsome praise in a manner that suggests that just because the president is to become less powerful on paper does not mean he should be spared adulation.

“I would like to note that we are all witnesses to an important moment in the history of an independent Kazakhstan. The address of the head of state regarding constitutional reforms is indubitably an important and meaningful step in our nation’s path toward modernization,” Amin Urpekov, a researcher with the Kazakhstan Institute of Strategic Studies, told state-run Kazinform.

Commentators on social media have greeted the plans more cooly.

Journalist and publisher Irina Petrushova said that the division of powers would only truly be effective if the country institutes real political pluralism.

“That is if they allow the free registration of political parties and they hold FAIR parliamentary elections. If this doesn’t happen, then everything in parliament will as before be controlled by Nazarbayev’s party and the real difference between what we have now and what is planned will be nonexistent,” Petrushova wrote on her Facebook account.

Activist Galym Ageulov was similarly cynical in noting that Nazarbayev, who is officially termed Elbasy — Kazakh for “leader of the nation” — might simply by means of the reforms be replaced by several “Yelbasyky” (“mini Yelbasys”).

“We simply need to dissolve parliament so that we can hold clean elections in single mandate constituencies and … reform the party system so as to render it open and free,” Ageulov wrote. “Under a system of free association, many new players will appear and the monopoly of Nur Otan will become a thing of the past.”

Ageulov gloomily predicted only a change of form but not of content.

“As it is, nothing will change. We had one big square and now we will have lot of little cells,” he wrote.

Commentators frequently note that Nazarbayev’s reluctance to relinquish power may stem from his anxiety of a possibly outbreak of elite infighting that could lead to broader instability. These fixes appear in part addressed at mitigating that possibility, although US-based scholar Erica Marat questioned whether enough was being proposed.