Tokayev says he is going to make it easier for more political parties to get registered. 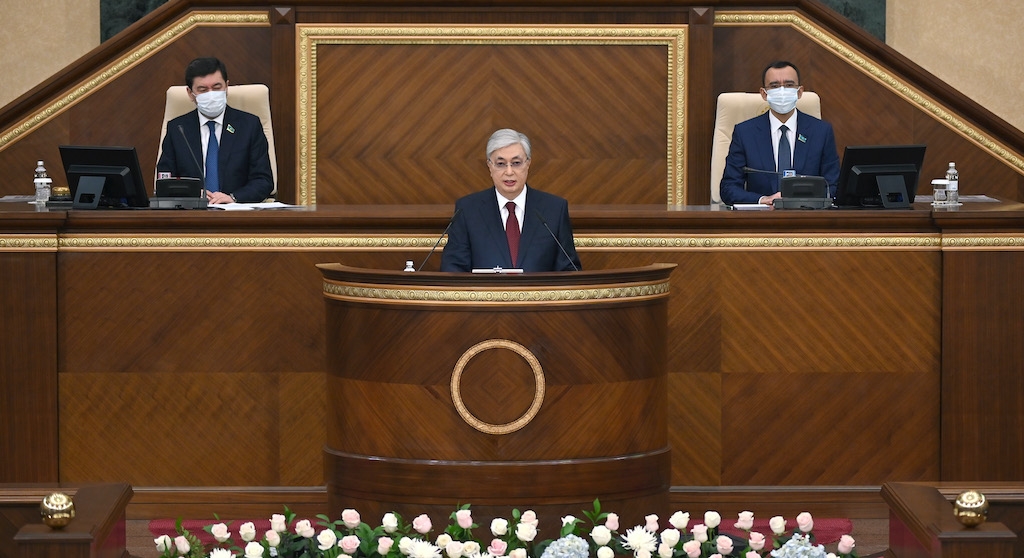 In his first address to the nation since protests spiraled into deadly violence in January, Kazakhstan's president has promised sweeping political reforms and vowed to make sure the economy does not wither under the weight of international sanctions aimed at neighboring Russia.

Kassym-Jomart Tokayev’s pledges to a joint session of the houses of parliament on March 16 included making it easier for new political parties to register, making the legislature better reflective of public sentiment, and diluting the overwhelming powers of the president’s office.

He also appeared to take a swipe at his predecessor’s legacy by vowing to ensure that none of his own close relatives would be allowed to hold important political posts. Ex-President Nursultan Nazarbayev’s oldest daughter, Dariga, served for a while as chair of the Senate, a role that placed her for a short while in pole position to take over from her father.

The promise of deep reforms will be welcomed with caution by Kazakhs who have long been awaiting systemic change. Over his three decades in power, former President Nursultan Nazarbayev, who stepped aside to make way for Tokayev in 2019, often dangled the prospect of radical transformations, but ultimately did little to dismantle an order that primarily favored the interests of cronies.

Tokayev has likewise disappointed on this front, although the nationwide unrest in January appears to be the clearest signal to date that the nation’s leadership is running out of free passes. He appeared in his speech to acknowledge that in categorical terms.

“The system of management based on super-concentrated powers has ceased to be effective. It is unable to accommodate civil society with its many diverse views and convictions,” he said, before offering what he saw as the remedy. “The rejection of excessive presidential powers will be an important factor that will ensure the irreversibility of political modernization.”

Multiple fixes are being proposed to achieve this end.

Parliament is dominated entirely by meek pro-governmental parties elected in typically sedate and uncompetitive polls via proportional representation voting. Fully 76 seats in the existing 107-member chamber are held by the ruling party, which was until a few weeks ago called Nur Otan, but which has since been rebranded as Amanat.

Tokayev has said that in the new-look parliament, 30 percent of deputies will be elected in single-mandate seats. This seems to raise the prospect of independent candidates getting a look-in, which was not the case until now.

The president said it will furthermore become easier to register new political parties. Under current rules, aspiring party founders must gather 20,000 signatures of support and establish branches in every region. Tokayev said that threshold will be lowered to 5,000.

While the Majilis, as the lower house of parliament is known, ostensibly gains more authority, the Senate, often seen as little more than a presidential purview, is being weakened. The Senate will under Tokayev’s changes only be able to approve or reject legislation approved by the Majilis.

As well as talking about the deep-lying political causes of the January unrest, Tokayev has continued, as he has done many times before, to blame that violence on the “criminal acts of radicals and terrorists.” But he is inching ever closer to also pinning some culpability, albeit very obliquely, on elements close to the people that formerly ran the country.

“It is known for sure that conspirators sought to seize power. The question that arises is: what prompted them to take such a step? The answer is obvious,” he said. “In recent years, Kazakhstan has embarked on the path of radical modernization and transformation. Large-scale transformations began in various areas. Some influential people didn't like this. They expected to continue their many years of illegal activities. Moreover, they were eager to hold power.”

Tokayev has avoided pointing his finger directly in the direction of Nazarbayev or any of his immediate relatives. Some recent developments confirm, though, that even the former ruling family is no longer off-limits.

Over the weekend, the authorities in Kazakhstan announced that they had detained Nazarbayev’s nephew and that they were investigating him over possible involvement in “crimes undermining the security of the state.” The main stated reason for the arrest of Kairat Satybaldy, an influential businessman and former security officer, was alleged embezzlement at the expense of Kazakhtelecom, the state-controlled telecoms operator, in which Satybaldy owns a 24 percent share.

Also this week, the Agency for Financial Monitoring accused Nazarbayev’s brother, Bolat, of involvement in business activities “presenting a threat to the country’s economic security.” Bolat Nazarbayev, they said, had a hand in lucrative – and apparently illegal, although they did not spell that out – cryptocurrency mining operations in northern Kazakhstan that have now stopped.

Tokayev dedicated an important chunk of his speech to addressing the looming threat of economic slowdown caused by international sanctions against Russia, Kazakhstan’s main trading partner. The country “faces unprecedented … financial and economic difficulties against the backdrop of the worsening geopolitical situation,” he said, dwelling in particular on the sharp drop in value of the tenge.

Tokayev said this slide had been caused by panic and capital flight, which is partly being enabled by the unauthorized removal of large amounts of hard currency from the country.

“But there is no reason to panic. Our country has all the necessary reserves and tools to overcome a large-scale crisis,” he said.

Tokayev reminded his listeners that he had this week banned the export of hard currency in amounts worth more than $10,000, as well as gold and silver bullion, as part of efforts to stabilize the tenge.

Turning to food security, Tokayev said he had instructed the government to ensure that the agricultural sector be provided timely support to ensure farmers are able to source seeds, fertilizers, farming equipment, and fuel at affordable prices.