Tokayev's attention to this relatively trivial issue shows he wishes to be seen as a "listening president." 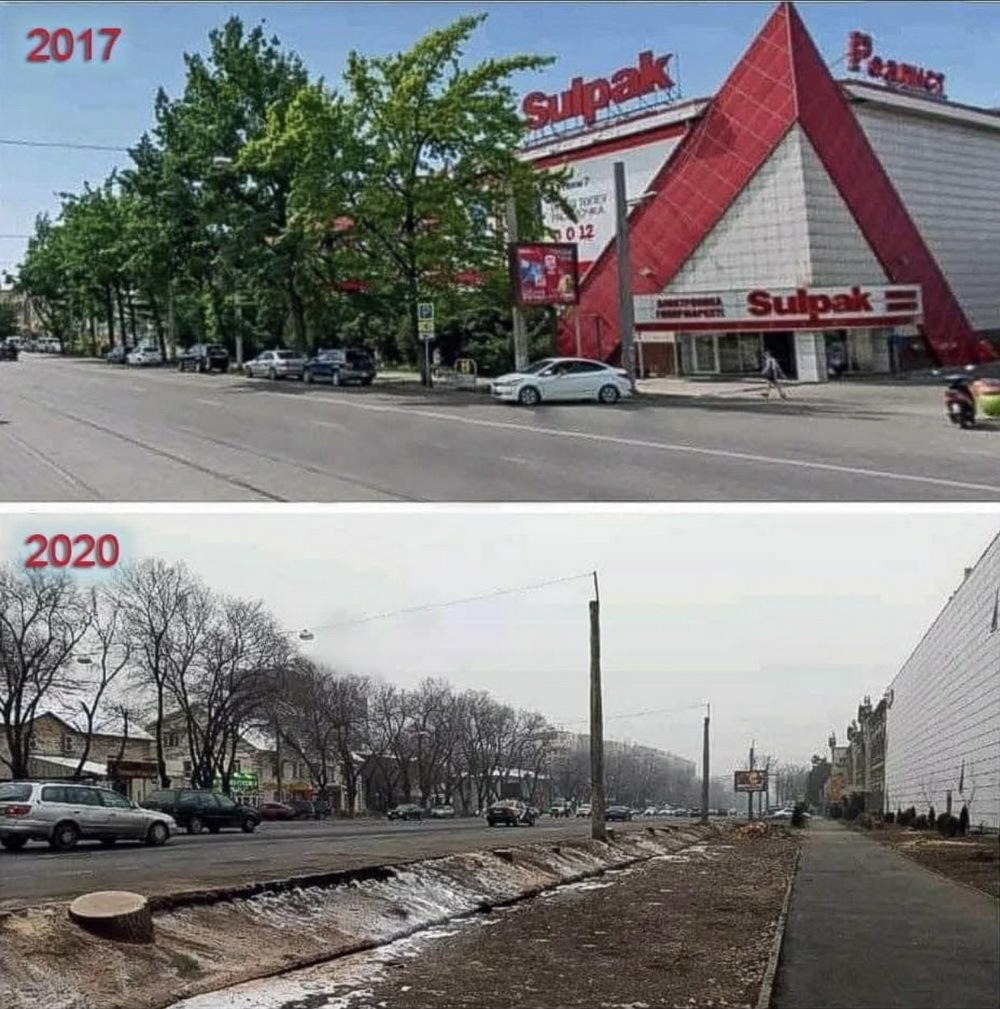 A widely circulated before-and-after image showing the results of the tree-felling outside the Sulpak store. (Photo: Facebook)

The felling of a row of trees in Kazakhstan’s business capital has provoked a row that has even prompted the intervention of the president.

A hubbub broke out on social media over the weekend, when Almaty residents awoke to find that tall elms and oaks that provided shade during the sultry summer along a central thoroughfare had been cut down. Meanwhile, a branch of the Sulpak electronics chain, which was previously obscured by the trees, can now be seen clearly.

Citizens posted photos of the despoiled street on social media, demanding among other things that whoever was responsible be punished. One commenter hyperbolically likened the destruction to the surprise Nazi invasion of the Soviet Union in 1941.

"[They acted] at 4 a.m. in the morning, treacherously, without any declaration of war," he wrote, alluding to the fact that the tree-choppers did their work at a time when any objectors would likely be asleep.

Sulpak, meanwhile, tried to ignore the fuss, but it eventually issued a statement to say it had nothing to do with what happened and that it condemned the “illegal” action.

But the environmental enforcement agency for Almaty city hall undermined that denial on November 23, when it reported that the trees had been cut down by contractors employed by Sulpak. The contractors were reportedly fined around $320 for making a noise at night and failing to clean up the space in a timely fashion.

Everybody involved must have hoped the furor would end with that, but such was the clamor that this incident reached President Kassym-Jomart Tokayev’s ears.

As distressing as any wanton damage to the environment might be, it is curious that a head of state should choose to get involved. But Tokayev’s decision to wade into the controversy may be read as an attempt to bolster his claims to being a listening leader – an important theme as the January parliamentary elections loom.

Action was quick to follow. Prosecutors on November 24 announced that they were initiating a probe into the illegal felling.

Environmental issues have long been a concern for residents of Almaty nostalgic for a time, under the Soviet Union, when the city center teemed with greenery and trees bulging with fruit. In the chaos of early independence, however, lax enforcement and the depredations of unprincipled developers robbed Almaty of much of that natural beauty. Entire orchards were razed to make way for elite residences, and smog would come to replace the city’s once-clean air.

According to the World Health Organization, the concentration of PM2.5 particles in Almaty’s atmosphere exceeds their recommended limits sevenfold, a fact that has given rise to a proliferation of respiratory conditions and allergies.

By demonstrating that he is aware of these quality of life questions, Tokayev is intent on showing he is in touch with the concerns of the people.