Pledges to let people raid their pension pots were met favorably, though. 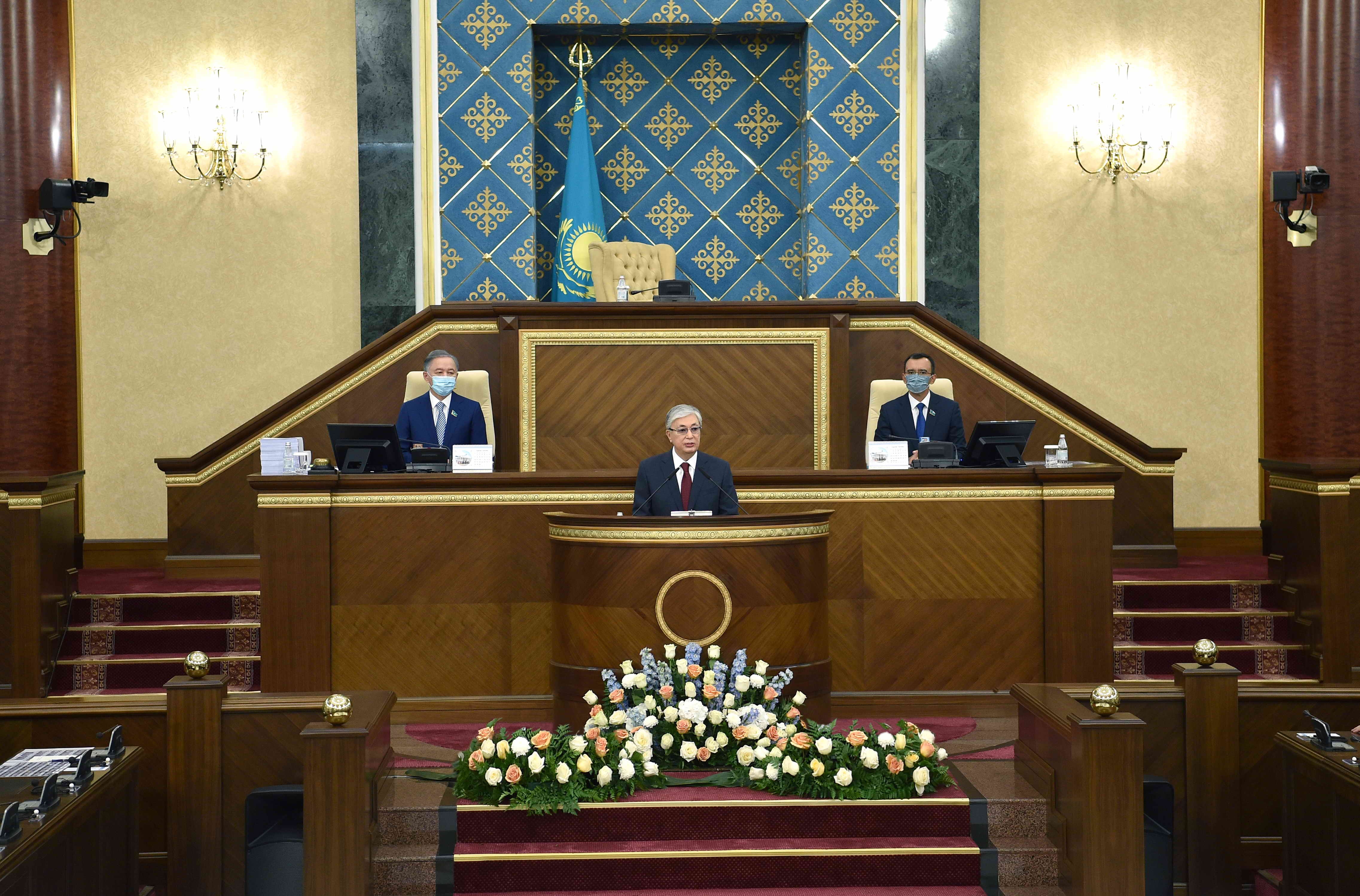 What a state: Tokayev delivering his speech this week. (Photo: Presidential press office)

The second state-of-the-nation address delivered by Kazakhstan’s president has been greeted largely with shoulder-shrugging, although stated plans to allow citizens to withdraw money from their pension funds has won plaudits from the public.

Kassym-Jomart Tokayev, who took office in 2019, returned to many familiar themes in his September 1 address, which was focused in large part on injecting a note of optimism after a torrid year of economic woe precipitated by the coronavirus pandemic.

He spoke about working toward optimizing the welfare system, making the economy more productive and greener, leveling the playing field for enterprise, investing further in education, and overhauling the management of the state to make it more responsive and accountable. The speech contained little detailed policy, however.

The plan for pensions was the one thing to provoke some excitement. The intention is to allow citizens to dip into their pension pots in case they wish to invest in buying a home or pay for the cost of medical treatments. A certain portion of the pot will be ring-fenced, though, and that amount will vary from one citizen to another.

Tokayev said around 700,000 Kazakh citizens will be eligible to take up this pension pot offer.

Since 2013, pension contributions have been held in an entity called the Single Accumulated Savings Fund, or ENPF in its Russian initials. In line with the practice of many a private pension fund, the state ploughs those monies into private sector investments, but a clutch of failed investments over the years has generated considerable criticism.

Sure enough, as the pot stands now, it looks less than impressive.

Labor and Social Protection Minister Birzhan Nurymbetov admitted in February that 84 percent of depositors have pension savings of less than 2 million tenge (now worth around $4,800). Kazakh savers have been afflicted most acutely by the devaluations that have more than halved the dollar value of their tenge holdings over the past five years. Add questionable investments and inflation into the mix, and it makes for an unpleasant picture.

That is what makes Tokayev’s pledge so appealing. “Better a bird in the hand than two in the bush” is the prevailing mindset.

Experts are more doubtful, however.

The former head of the Kazakhstan Stock Exchange, Azamat Joldasbekov, wrote on his Facebook page that the celebratory mood is unwarranted, since the amounts of money people will be able to draw will be paltry and insignificant for the purposes on putting down deposits on homes or other major capital investments.

This may be another area where the gap between rhetoric and reality uncomfortable exposes the government’s limited scope for action.

Vyacheslav Abramov, chief executive of Vlast news website, was scornful about Tokayev’s speech overall, saying that it was high on promises that would never be fulfilled.

In an interview to RFE/RL’s Kazakh service, Radio Azattyk, political analyst Dosym Satpayev was scornful about what he described as the passion of Kazakh officials for the “simulation of fervent activity.”

“What the epidemic has shown us is that the previous appeals that we used to hear, about all the wonderful goals and tasks and attitudes, have all flopped. Coronavirus has shown that we have no economy, no effective state apparatus, no reserves and no healthcare system,” he said.

The World Bank has made its own grim forecasts for this year, albeit in less emotive terms. It said in a July 22 report that “preliminary estimates suggest that the poverty rate may rise in 2020 from a projected 8.3 to 12.7 percent – equating to more than 800,000 additional people living in poverty.” The same report saw the economy contracting by 3 percent this year.

Satpayev contends that 90 percent of Kazakhstan citizens have long given up listening to repetitive presidential speeches.

“Take Tokayev’s current message for example. He stated that we want to reduce the size of the state apparatus by 25 percent by 2021. Nazarbayev once said that it should be reduced by 30 percent. But the state apparatus has not been reduced, and in fact new ministries have appeared," he said.

While making many vague vows, said Satpayev, Tokayev failed to answer one important question: “What will happen if it all collapses again?”