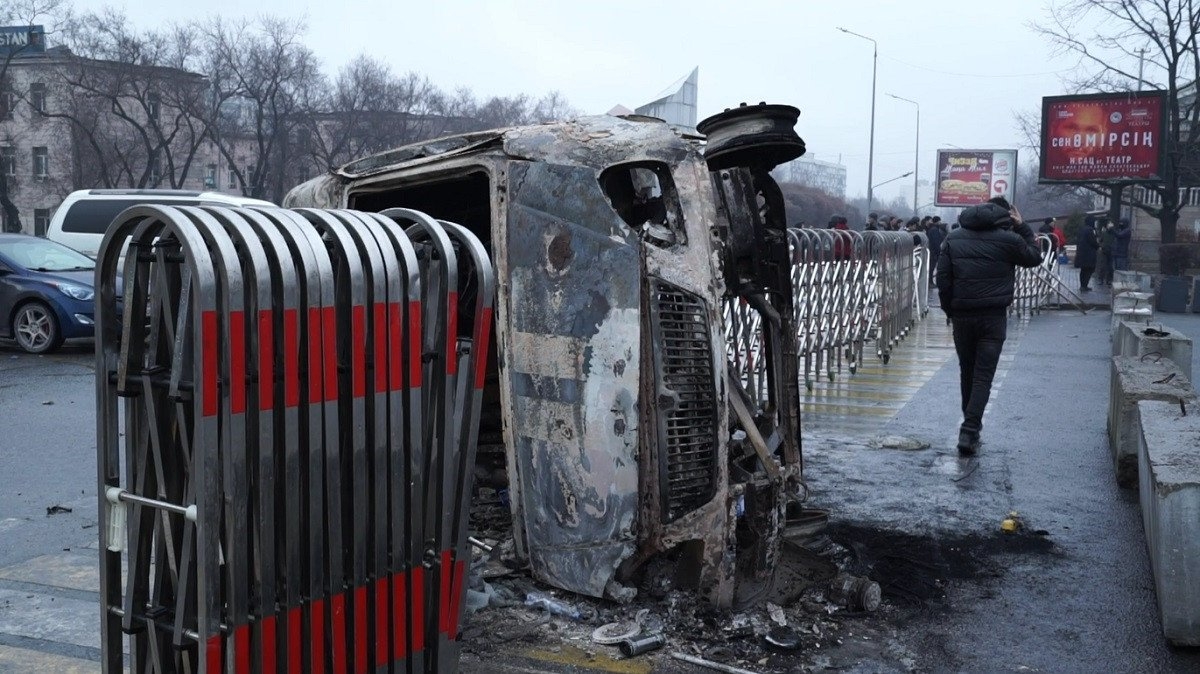 A vehicle destroyed during the unrest in January. (Photo: State media)

Prosecutors in Kazakhstan have elaborated slightly on their account of the violence that erupted in Almaty in early January, putting the blame on political opposition groups, among others, while ignoring the intra-elite struggle narrative that has taken root among the broader population.

Speaking at a briefing on February 7, Rizabek Ozharov, head of the special prosecutorial service of the Prosecutor General’s Office, described last month’s events as a “hybrid attack” mounted by “destructive and criminal circles.”

That part of the story is familiar, but the official narrative is now being widened to take in some familiar names. Ozharov mentioned banned opposition groups tied to self-exiled former banker and foe of the Kazakh government, Mukhtar Ablyazov, as being among the leading culprits.

Those explicitly political groups are some of the few entities that have been specifically identified by Kazakh government investigators. On January 27, state television channel Khabar broadcast a documentary on last month’s events in which it stated that people detained during the chaos included members of an obscure Islamic group called Yakyn Inkar. The group was designated as an extremist formation in 2018.

Investigators have not yet sought to explain how it is that explicitly secular political groups like DVK and religiously motivated adherents of Yakyn Inkar, which is described by the authorities as a wing of the ultra-pious missionary movement Tablighi Jamaat, came to coordinate their actions. All they have stated is that the groups used peaceful rallies as cover for sowing trouble.

While talking about single groups alleged to have somehow been involved in the unrest, authorities have shied from offering theories about which parties might ultimately have coordinated the events.

Political commentators have been less circumspect and have voiced the theory that elements close to ailing 81-year-old former President Nursultan Nazarbayev orchestrated the disturbances as part of an elaborate ruse to retain their influence. Nazarbayev was absent from view for several weeks before finally surfacing on January 18 to deny that speculation.

Late last week, the Prosecutor General’s Office announced that it had opened 3,000 criminal cases and made 800 arrests so far. Among the people under arrest, it named a figure from the Kazakh criminal underworld called Arman Dzhumageldiyev, better known by his nickname Wild Arman. Investigators claim he traveled to Almaty from abroad in December and that he was detained by police during the unrest. Ozharov has said Dzhumageldiyev’s group abducted 24 people and beat one of them to death.

Dzhumageldiyev is currently being held in a pre-trial detention facility of the National Security Committee on charges of firearms possession and inciting riots, officials have said.

While steering clear of the intra-elite angle, the government does concede that elements within law enforcement structures played a role in enabling the scale of violence.

Ozharov has pointed to how police officers in the Almaty and Zhambyl regions allegedly abandoned their precincts without putting up resistance, enabling mobs to steal more than 1,500 units of weaponry, including grenades, automatic rifles, and handguns. To date, only two-thirds of those stolen weapons have been found, officials say.

The rapid collapse of security structures seen in the days after January 5 has been attributed in large part to an alleged conspiracy to seize power by the leadership of the National Security Committee, or KNB. Prosecutors have accused heads of KNB departments in Almaty city, and Almaty and Kyzylorda regions of “deliberately impeding the actions of special forces charged with ensuring law and order.”

Former KNB chief Karim Masimov, a veteran government fixture close to Nazarbayev, is under arrest, along with several deputies, on charges on treason. No details on these accusations have been divulged.

Rights activists have complained that the authorities are withholding too much information about the events of January, most notably the identity of all the people killed. According to official figures, at least 227 died during the disturbances, but no definitive list of names has been produced.

There is also lingering concern that the authorities will fail to properly investigate widespread claims of torture carried out against detainees. That is important because the official story about the violence being the work of terrorists and extremists may hinge to a considerable extent on testimonies extorted through physical abuse.