Anxieties over perceptions of Russian chauvinism are already running high in Kazakhstan. 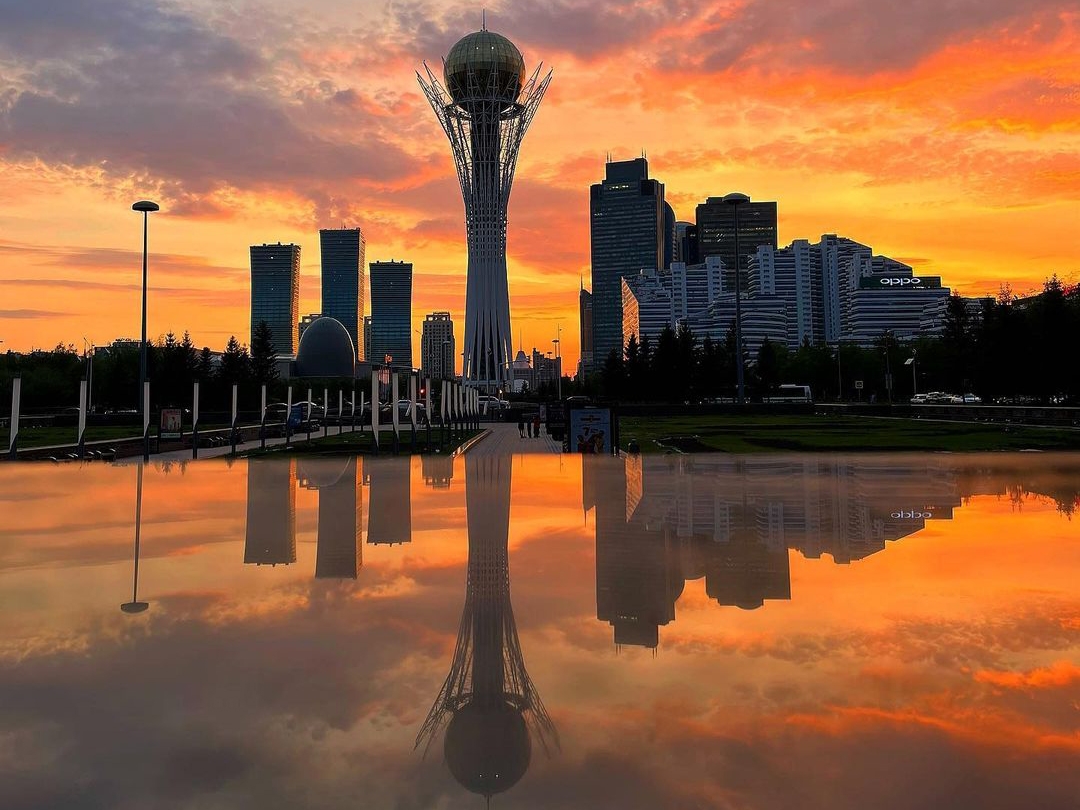 Is the sun setting on a beautiful friendship? (Kazakh government handout)

Police in Kazakhstan have said they are investigating a presenter for the local affiliate of a Russian-owned radio station over a social media post in which she appeared to endorse the idea of an invasion by Russian troops.

The offending remarks, which the now-fired Europa Plus Kazakhstan host Lyubov Panova made on Facebook last week, have added fuel to a fiery public debate about the depth of Kazakhstan’s economic and diplomatic closeness to Russia.

Panova posted her message over the weekend amid an exchange of opinions about Russian’s military assault against Ukraine. Apparently perceiving criticism of Moscow’s policies as a veiled assault on the rights of ethnic Russians in Kazakhstan, Panova alluded in one comment to the prospect of Russian troops being deployed in the country.

“If you keep [yapping] so much, we’ll call Uncle Vova for help,” she wrote, an allusion to Russian President Vladimir Putin.

The furor compelled Moscow-based Europa Plus, which operates affiliate stations in more than half a dozen former Soviet states, to scramble its public relations machine. In one post on Instagram, it stated that that the editorial policies of Europa Plus were founded on “such immutable values as the democracy, unity, independence and [territorial] integrity of Kazakhstan.” The broadcaster later followed up to distance itself from Panova.

“Europa Plus Kazakhstan hereby states that the positions expressed by our employee Lyubov Panova on her personal social media accounts are in no way associated with policies of our radio station,” another post read.

Panova was later let go by the broadcaster.

Now even the police appear to be involved.

Rustam Abdrakhmanov, head of the investigative department with the Interior Ministry in Almaty, announced on March 28 that his office was initiating an investigation into a possible instance of incitement of ethnic hatred. Abdrakhmanov later deleted his statement without comment, however.

Anxieties over perceptions of Russian chauvinism are already running high in Kazakhstan.

There were more howls of indignation when an obscure deputy in the Moscow city Duma argued in a public petition dated March 24 that Russia should expand the targets of its ongoing military assault on Ukraine to more countries, including Kazakhstan, along with Latvia, Lithuania, Estonia, Poland, and Moldova. This course of action, Communist Party member Sergei Savostyanov said, would ensure the “demilitarization and denazification” of those countries and ensure Russia’s own security.

Diplomats in Nur-Sultan have already signaled they intend to ignore what appears like little more than an attention-grabbing stunt by a small-fry politician. These kinds of remarks, questioning the legitimacy of Kazakhstan’s territorial integrity, have been recurrent fare for chauvinist Russian politicians and pundits, up to and including Putin himself, in recent years, however. And they have become harder to ignore in light of Russia’s bloodletting in Ukraine.

On March 28, the General Prosecutor’s Office published a statement that was essentially a blanket warning for the general public to refrain from posting overly provocative messages on social media about the war in Ukraine. One phrase sounded like a veiled allusion to Panova.

“Some social network users, including citizens of Kazakhstan, are publicly commenting on the ongoing events and posting separatist messages regarding the territorial integrity of our country,” the statement reads.

The general mood of wariness over the entire Ukraine question is being reflected in diplomatic positions too.

Speaking in an interview to German daily Die Welt, deputy foreign minister Roman Vassilenko expressed unease at Kazakhstan being perceived as being lumped together with an increasingly isolated Russia behind a “new Iron Curtain.”

"If there's a new Iron Curtain, we don't want to be behind it," he said in remarks translated and relayed by the AFP news agency.

Vassilenko then made a call for foreign businesses fleeing Russia to consider redirecting their investments to Kazakhstan.

But "not in order to dodge sanctions against Russia," he was quoted as saying. “All companies with good reputations that want to set up here are welcome.”

Perceptions of Kazakh disloyalty will be received with extreme coolness in Moscow, but Nur-Sultan possibly has its own reasons for feeling short-changed at the moment.

Last week, a consortium operating the pipeline that Kazakhstan uses to export the bulk of its oil announced that the route had been rendered largely unusable for several weeks because of infrastructure damage caused by a recent storm. The Caspian Pipeline Consortium, or CPC, said in a March 22 statement that two of three tanker loading facilities at the Russian Black Sea port of Novorossiysk, which allow ships to take on oil at a safe distance from the shore, were rendered inoperable.

Some analysts have voiced skepticism, however, over the reliability of claims that the loading facilities could have been so badly damaged by bad weather. Experts cited by the Financial Times noted that none of the consortium’s Western partners, which include the majors Chevron and Exxon, who own 15 percent and 7 percent stakes, respectively, were able to carry out their own inspections.

The implication is that Russia may be limiting oil flows, and thereby also pushing up global prices for the commodity as an ancillary effect, as a reprisal for the sanctions it is facing for its actions in Ukraine. The West may be hurt by such scheming, but the pain for Kazakhstan could well end up being worse.