Independent experts say sweeping the tensions under the carpet is not helping. 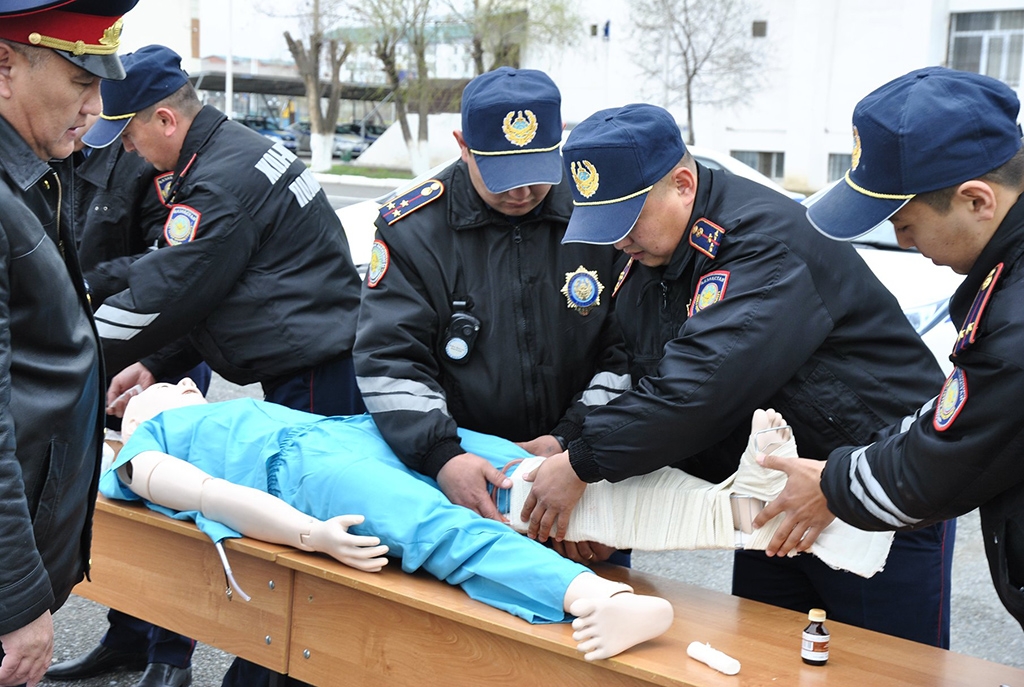 Police stopped the fight, but underlying tensions are harder to heal. (Illustrative photo/MVD.kz)

An angry mob has reportedly torn through a village in southern Kazakhstan following a fight between two high school students of different ethnicities that left one boy in the hospital.

An amateur video shows the October 27 brawl among several dozen boys in the courtyard of the school in Penzhim, a town near the Chinese border. It ends when one boy falls and remains on the ground. His friends pick him up and carry him into the building. "A Kazakh got beaten up," says a voice speaking Uyghur.

Penzhim, a town of about 12,000, is roughly one-third ethnically Uyghur. The incident is a reminder of how quickly ethnicity can shape anger in places beyond the reach of Kazakhstan’s economic progress. Yet authorities were once again quick to dismiss troubles, which could dent Nur-Sultan’s carefully crafted image of ethnic harmony.

One female eyewitness in Penzhim told the news website Tengrinews.kz that the situation calmed quickly after the fight. But then men from nearby villages arrived and began throwing stones, breaking windows and smashing cars.

Police confirmed that "about 30 people gathered near the house of one of the participants in the fight between the schoolchildren. A group of people broke the windows of a number of private houses as well as several vehicles." Officials said they had restored order and opened criminal cases.

Eyewitnesses also reported that a local house caught fire, but police blamed a heater and denied any connection to the ethnic tensions.

Maya Bekbayeva, an official with the People's Assembly of Kazakhstan, a state-coordinated body whose existence is intended to support interethnic harmony, denied there was an ethnic angle to the fight and blamed unnamed “provocateurs.”

“I especially want to emphasize that there are no conflicts, let alone clashes, between villagers on interethnic grounds. There have not been and will not be. Local residents – both Kazakhs and Uighurs – have lived together for many years, are friends and neighbors, and they all sincerely want peace and tranquility,” Bekbayeva said in a statement.

But according to a report by Radio Azattyq, at an October 28 meeting with local police and government officials, residents said the conflict “was not born yesterday,” and that “young people have long been divided by ethnicity.”

The residents of Penzhim may count themselves lucky. During a fight last year between Kazakhs and Dungans in the village of Masanchi, 11 people were killed in a matter of hours, about 200 were wounded, and dozens of homes, businesses and cars were burned. Thousands of Dungans fled over the border into Kyrgyzstan.

In that case, too, authorities quickly played down ethnic troubles. Commenting on the Masanchi violence, President Kassym-Jomart Tokayev said that two criminal gangs involved in smuggling were behind the conflict. This time, officials also insisted that the incident was purely domestic in nature.

Independent experts say sweeping the tensions under the carpet is not going to help.

Sociologist Serik Beisembayev, who conducted a study of interethnic hostilities in southern Kazakhstan several years ago, is convinced that the root causes are related to socio-economic inequality and dissatisfaction with poor governance.

He noted in an interview with the news website 365info.kz shortly before the rampage in Penzhim that many Kazakhs feel Dungans, having historically been engaged in agriculture, have access to better land. He stressed that this is not true.

"These tensions tend to spill over precisely into interethnic tensions, because it's easier for people to find fault that way," Beisembayev said.