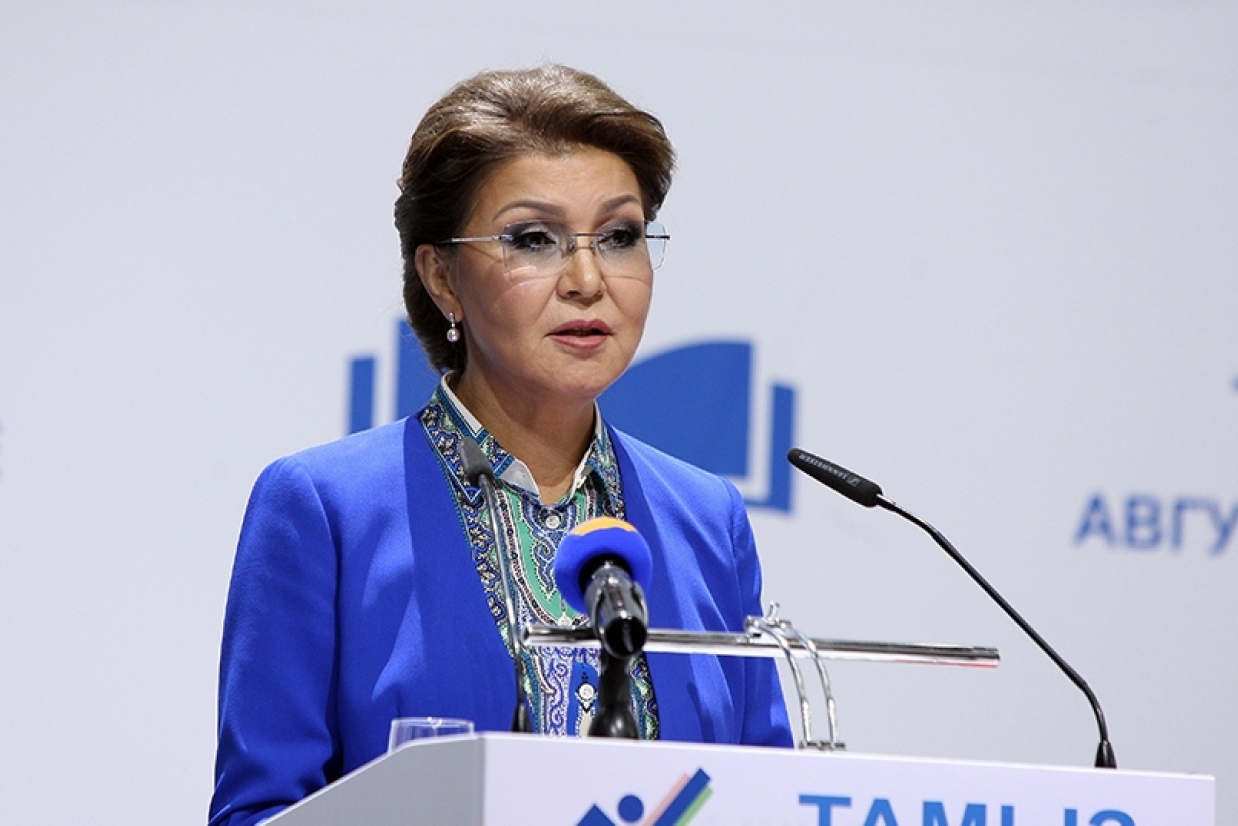 Dariga Nazarbayeva, the Kazakh president’s eldest daughter, speaks at a government meeting in August 2016. Her appointment to the Senate this week sparked talk of her being primed to take over the reins in the event of her father being unable to fulfill his duties. (Photo: Press Service of the Prime Minister of Kazakhstan)

The latest shakeup of the government by Kazakhstan’s president looks seismic at first appearance, but closer scrutiny suggests this is only a cosmetic rearrangement.

Perhaps the most striking innovations to come out of the Cabinet announcements on September 13 were the creation of new government departments: a ministry of religion, to be headed by a former foreign affairs adviser to President Nursultan Nazarbayev, and an anticorruption agency.

Elsewhere, Dariga Nazarbayeva, the Kazakh president’s eldest daughter, was removed as deputy prime minister and plopped into the Senate, sparking talk of her being primed to take over the reins. Succession talk comes around periodically in Kazakhstan and has been reignited by recent demise of Uzbekistan’s President Islam, who at the age of 78 was only two years older than Nazarbayev is now.

A notable promotion arrived for Imangali Tasmagambetov — another figure sometimes mentioned as a presidential succession option. He was moved from the head of the defense ministry to a position of deputy prime minister, taking over from Nazarbayeva. The defense brief will be taken over by Saken Zhasuzakov, former deputy defense minister and chairman of the Chiefs of Staff Committee.

Political analyst Andrei Chebotarev said Tasmagambetov would likely make a smooth transition into the deputy PM’s chair. Prior to serving as defense minister, Tasmagambetov had what were perceived as successful stints, from 2004 to 2008, as mayor of Kazakhstan’s business capital, Almaty, and mayor of Astana, from 2008 to 2014. He was also prime minister from January 2002 to June 2003. His standing is particularly high in the oil-rich west, where he is from.

“The fact that Tasmagambetov was substituted by Zhasuzakov is testament to the fact that the authorities have likely decided to move away from the practice of having the Defense Ministry being run by civilians. Now this ministry will be run by a military man,” Chebotarev said.

Some of the changes were structural.

The Ministry for Affairs of State was downgraded to an agency that also now includes anticorruption in its brief. The creation of the agency has been explained as an attempt to optimize government administration and fight against graft. That new body will be headed by Kairat Kozhamzharov, who formerly was in charge of an analogous sub-ministerial department called the National Bureau for Fighting Corruption.

Another eye-catching development was the formation of a Ministry for Religion and Civil Society to be headed by Nurlan Yermekbayev, a former aide to Nazarbayev and secretary of the National Security Council. Religious issues were previously the purview of the Ministry of Culture and Sport.

Yermekbayev was quoted by TengriNews as saying the new ministry would, among other things, be responsible for “ensuring citizens’ rights in the area of religious freedoms.” The ministry will be responsible for work with the nongovernmental sector, civil society groups and implementing youth policy, officials said.

Astana has a checkered past in its policies on nongovernmental bodies. Nazarbayev approved a law in December that established a state operator through which funding for NGOs had to be channeled, fundamentally undermining the nongovernmental aspect of such groups. As indignant activists argued at the time, the law appeared intent on securing ideological control over areas of society not directly subordinate to the state machine.

As to the religious component, the appearance of the ministry comes several months after a burst of seemingly Islamist-inspired shootings in the western city of Aktobe that laid bare the authorities’ apparent lack of anti-radicalism strategy.

Nazarbayev was enthused by his own shakeup, calling it an appropriate reaction to the demands of the times. The rearrangement will increase public wellbeing, boost economic indicators and ensure national security, the president said, according to a statement on his website. Nazarbayev said the changes had brought in a new generation of officials, including some educated under the Bolashak scholarship program, which has funded the studies of many young Kazakhstanis in universities around the world.

“It is unlikely that there have been fundamental changes in the state system. It is more likely that the authorities understand what is going on in the country and what tasks they face. The government cannot but see that society is demonstrating its unhappiness with the economic situation, and this while the cabinet seems to have lost interest in its job,” Sarym said.

It is Dariga Nazarbayeva’s appointment to the Senate that has really set tongues wagging, however. That might signal kicking upstairs for some veteran figures, but were she eventually to be named speaker of the upper house, it would formally put her in a position to take over as president in the event of her father being unable to fulfill his duties. That transition would likely set the stage for a dynastic coronation.

But as Sarym argued, Nazarbayeva has struck a far from presidential figure in recent years.

“Dariga clearly couldn’t cope with the jobs she was given. And what is more she spoiled her image with some ill-conceived statements,” Sarym said.

That was a reference in part to remarks that Nazarbayeva made in 2013, when she created wide offense with crass remarks about disabled children.

“From time to time, we should send young people on excursions to institutions for invalid children so they can see for themselves the result of engaging in ill-advised sexual activity. We can show the children these freaks, let them see for themselves,” she said.

Rather than using her multiple appointments to government post to build her influence, Dariga has squandered her opportunities, Sarym said.

“There is unhappiness with her work in the president’s entourage and in society at large. Her train has left,” he said. “The time when Nazarbayev could name members of his own family as a successor has passed. The world has changed.”

Clues about the future may lie in a lower-profile appointment: The naming of the former justice minister and member of the presidential commission on corruption, Berik Imashev, as head of the Election Commission.

That, Chebotarev speculated, may presage the holding of a referendum to modify the constitution to dilute the powers of the president and begin Kazakhstan’s transition to a parliamentary system, where authority would be balanced between the president’s office and the legislative branch.