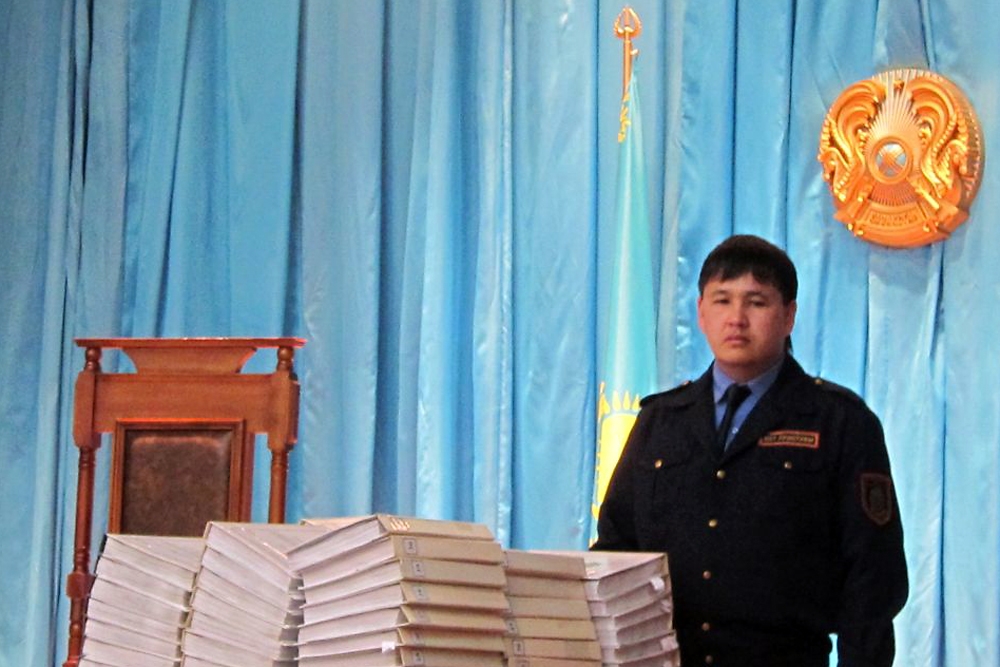 An attempt to render justice is quickly turning into a PR debacle for Kazakhstan. Troubling allegations that torture was employed to obtain incriminating statements is engulfing the trial of 37 individuals accused in connection with a deadly riot last December in the western oil town of Zhanaozen.

The torture claims are sparking calls from human rights groups to suspend the trial, which began on March 27 in Aktau, 150 kilometers from Zhanaozen. At least 16 people died in the Zhanaozen confrontation on December 16, when police opened fire on protestors.
“The alleged widespread and serious ill-treatment of the defendants undermines the ability to guarantee them a fair trial, which should lead a court to halt proceedings,” Human Rights Watch (HRW) said in a statement distributed April 23.

Officials in Astana maintain they have a zero-tolerance attitude toward torture and are pledging that the allegations will be thoroughly investigated. “The Government takes any allegation of mistreatment seriously,” Foreign Ministry spokesman Altay Abibullayev told EurasiaNet.org in an e-mailed statement.

Still, it appears the burgeoning scandal could result in another black eye for Kazakhstan’s democratization record. The entire Zhanaozen episode has done considerable damage to Astana’s efforts to shape Kazakhstan’s image as a modernizing, stable and law-governed state. More directly, the torture allegations come after Yerlan Idrissov, Kazakhstan’s ambassador to Washington, asserted in an April 6 commentary published on The National Interest website that the Zhanaozen trials “will prove to the world that Kazakhstan respects the rule of law, believes in an open and transparent system of government, and does not tolerate violence against its citizens.”

In the Aktau proceedings, claims of systematic violence by members of the security forces, several of whom were named in court, include beatings, threats of sexual assault, water torture and threats against family members. These methods, the accused alleged, were used to extract confessions, or incriminating statements against others.

“[The interrogator] suffocated me with a trash bag, he strangled [me] – when the bag’s taken away your eyes pop out and you can’t breathe and you start breathing deeply, and when you breathe deeply your head spins,” Roza Tuletayeva testified on April 16.

A second interrogator “lifted me up and slapped my face; he lifted me by pulling my hair upward,” she added. An audio file of her testimony was smuggled out of the courtroom, where the judge has used his legal prerogative to ban recording devices. The file was subsequently posted on YouTube.

Tuletayeva is one of 18 defendants who are former employees of the OzenMunayGaz energy company, which was at the center of a prolonged labor dispute last year: the strike ended up becoming the catalyst for the deadly rioting. A prominent figure during the strike, Tuletayeva is among those accused of being a ringleader of the unrest, which prosecutors say was premeditated. She faces up to a 10-year prison term.

Abibullayev, the Foreign Ministry representative, pointed out that the government has already shown a willingness to punish authorities who acted excessively. “Local officials have already been charged in relation to the treatment of detainees following the violence in Zhanaozen. Further allegations will be thoroughly investigated and more charges brought if they are found to be true. There is no place for such conduct in a modern society,” Abibullayev said.
Civil society activists in Kazakhstan began calling for a halt to the trial back on April 16, while demanding the opening of an investigation. A statement released by the activists detailed some of the torture claims: defendant Shabdal Utkilov alleged he was suffocated with a plastic bag; Maksat Dosmagambetov and Naryn Dzharylgasynov said their ribs were broken in beatings; Yesengeldy Abdrakhmanov claimed he had cold water poured over him and interrogators jumped on his chest; and Tanatar Kaliyev testified to being beaten around the face with a stool.

Another defendant, Parakhat Dyusenbayev, whose father was killed when police fired on demonstrators, said he was hit and threatened with sexual assault, according to a report carried by the Guljan news website.

Even before the results are known, the investigation is coming under fire. “It is absurd to think that the same prosecutor’s office involved in the investigation in which some of the abuse is alleged to have taken place is going to carry out an impartial review of the defendant’s claims,” Mihra Rittmann, HRW’s Central Asia researcher, was quoted as saying in the HRW statement.

To date, authorities have acknowledged and acted on one case of abuse in custody: that of Bazarbay Kenzhebaev, who died after a beating in detention last December. The officers who inflicted his injuries have not been identified, but the head of the detention center is to stand trial on a negligence charge. He will be among five police officers going on trial on April 27 accused of crimes related to the deaths of demonstrators.

Concerning the Zhanaozen violence, the number of protestors being tried outnumbers the number of law-enforcement personnel facing punishment by roughly a 10-to-1 margin. In addition to the 37 on trial in Aktau, the trial of 12 defendants opened on April 17 in the village of Shetpe, where one man was shot dead by police on December 17, when unrest spread from Zhanaozen.

The date of another trial involving individuals accused of inciting violence in Zhanaozen by “fomenting social discord” has yet to be set. The defendants in those proceedings include Vladimir Kozlov, leader of the unregistered Alga! party, and labor rights activists who were advising striking energy-sector workers before the dispute descended into deadly violence.