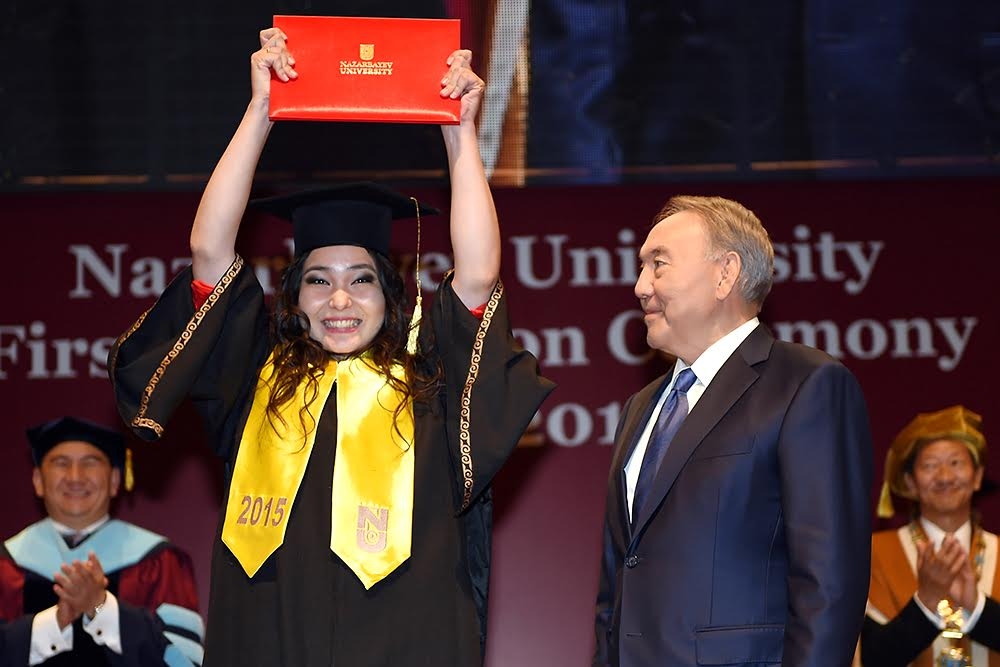 Kazakh President Nursultan Nazarbayev watches a student raise her graduation diploma over her head during the first graduation ceremony at Nazarbayev University in Astana on June 15. The state-funded university opened in 2010 with the ambition of becoming a globally top-ranked educational establishment. (Photo: Kazakh Presidential Press Service)

When Kazakhstan opened the doors of the Nazarbayev University in 2010, the institution was hailed as a fledgling bastion of academic excellence and freedom in an educational system still hobbled by Soviet standards.

A row brewing at the university now threatens to dent those aspirations and expose the limits of free-thinking against the backdrop of an increasingly tense international diplomatic scene.

On August 24, Professor Marcel de Haas went public with allegations that he is being squeezed out of the state-funded university over the management’s displeasure at a planned lecture on Ukraine that it deemed “politically sensitive.”

De Haas, 54, a retired military officer with the Dutch army with an extensive body of academic work on security issues across the former Soviet Union, said the initial impetus to prevent the talk came from the Russian embassy.

“This Russian interference puts Kazakhstan’s independence in doubt,” de Haas said in a statement detailing his allegations against the university. “How does [Nazarbayev University] think it can ever reach the level of world-class universities if a basic principle as academic freedom is not warranted and people that go against that are dismissed?”

Nazarbayev University’s press office and numerous management staff were contacted by EurasiaNet.org for comment on de Haas’ allegations. None replied by the time of publication.

De Haas said his differences with the Nazarbayev University administration were first exposed in August 2014, when a scheduled talk on the conflict in Ukraine was suddenly cancelled.

The scrapping of the lecture followed a complaint to the university by Ruslan Kuznetsov, the defense attache at the Russian Embassy in Astana, de Haas said.

The Russian diplomat’s letter, which was sent to Nazarbayev University administrative staff and copied to an official with Kazakhstan’s Defense Ministry, warned that de Haas’ proposed lecture, entitled “The Russian-Ukrainian Conflict,” would “introduce falsehoods into the minds of students.”

Kuznetsov went on to advance what he described as an outline of the situation in Ukraine that would better educate the university’s students.

“What is operating in Ukraine is a U.S.-controlled ultranationalist regime that aims to destabilize the situation in southeast Europe, broaden the market for American goods and services, and gain control over the energy infrastructure of Ukraine,” Kuznetsov wrote.

Kuznetsov argued that attempts by the Ukrainian authorities to divide the country along religious and linguistic lines were leading to bloodshed. The letter also proposes sharing with students the theory that the Malaysia Airlines passenger jet that was shot down over east Ukraine, killing all 298 people onboard, was intentionally redirected by Ukrainian air traffic controllers over a dangerous area as part of a Western plot to discredit Russia.

Kuznetsov failed to respond to EurasiaNet’s emailed requests for clarifications on whether he was attempting to unduly influence Nazarbayev University’s academic policies.

His correspondence was followed by an email to de Haas from Nazarbayev University vice president for student affairs, Kadisha Dairova, warning against pursuing the issue of Ukraine-related lectures any further.

“I learned from Arman [Zhumazhanov, head of Nazarbayev University’s Department of International Cooperation,] that you are still planning to hold a lecture on the Russian-Ukranian [sic] relations. I do strongly urge you NOT to do this at Nazarbayev University or elsewhere as a faculty member of this University,” Dairova wrote.

Dairova did not respond to EurasiaNet.org’s emailed requests for comment.

Her position, however, appears to contravene the ethos conveyed by the Nazarbayev University Graduate School of Public Policy’s Dean, Neil Collins, in his message on the institution’s website, which informs aspiring students that they stand to “receive an education that emphasizes critical thinking and analytical capacity.”

De Haas said that despite cancellation of the public talk on Ukraine, he proceeded all the same to incorporate the lecture into his course on international security in a class the following April.

“We had a nice academic discussion, with different views and mutual respect,” he said.

President Nursultan Nazarbayev’s own views on developments in Ukraine have inclined toward agreement with Russia’s position. At an international summit in March 2014, before full-blown conflict broke out in eastern Ukraine, Nazarbayev criticized the new leadership in Kyiv, arguing that they had come to power through “an unconstitutional coup d’etat.”

De Haas said the procedure to have him dismissed began at the start of 2015, when he was away for 10 weeks on sick leave because of a sports-related accident.

He said university management sought to deter him from coming to work, exploiting a law that would give them the right to review his contract after two months of sickness-related absence.

Offers to give lectures remotely through the Internet were rejected, de Haas said.

The professor said Nazarbayev University later decided on another tactic and had him dismissed under a labor law allowing for termination of a contract in the event of there not being sufficient work for an employee.

“According to Western legal standards, [Nazarbayev University’s] resignation decision is evidently ungrounded, and that will be recognized here in court too if the judicial system is independent and not politicalized,” de Haas said.

Kazakhstan has been investing heavily in its education system, which it sees as crucial to transforming the country into a technologically advanced and diversified economy. In its most recent budget projections for 2015-2017, the government estimated education expenditure over the three-year period would reach 1.7 trillion tenge. That sum was equivalent to around $9 billion when the budget was approved by parliament in 2014.

Nazarbayev University has taken a place of honor among all that investment.

The university began turning out its first graduates this year, when more than 400 students received their bachelor’s degrees after five years of study.

Nazarbayev called the June 15 graduation ceremony the fulfillment of his dream of creating a world-class educational establishment.

“Before me I see the first holders of diplomas of the university to which I gave my name. I gave this name especially so that it would receive the attention of the government and Kazakhstan,” Nazarbayev said.

De Haas said that he has taken his stance so Nazarbayev might personally take action against what he described as maladministration and money-wasting by officials in his university.

“It is high time that President Nazarbayev himself calls them to order, for their abuse of power and waste of taxpayers’ money,” de Haas said. “Not for me but for the nation of Kazakhstan, I hope that justice prevails.”